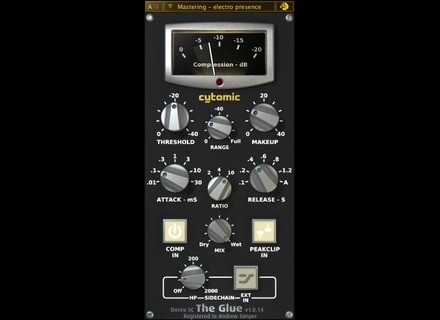 The Glue, Software compressor from Cytomic.

Cytomic The Glue
5
Cytomic's The Glue is a compression plug-in that is based on an SSL buss compressor from the 4000 series of consoles. The plug-in is available for both Mac and PC operating systems and in RTAS, VST, and AU formats. I didn't have any problems at all installing the plug-in, as there was nothing out of the ordinary about the process. Learning how to use the plug-in is another story, as it's got a good amount of controls to work with and will take a few tries to feel completely comfortable. It's definitely similar to an SSL buss compressor, but it's not a direct copy in sound or make up. Some of the parameters that it has include knobs for threshold, range, gain make up, attack, release, ratio, mix, and it also has a section for a high pass sidechain. It's easy to tell that you've got complete control with The Glue, which is one of it's finest selling points. I haven't seen a manual for The Glue, nor do I see myself ever having a use for one.

In my home studio I'm currently running Cytomic's The Glue buss compressor in Pro Tools LE 8. I run Pro Tools LE with a Digi 002R audio interface and on a Mac Book Pro that has a 2.2 Ghz Intel Core 2 Duo processor and 4 GB of RAM. Generally I'll only used The Glue on an auxiliary channel for drum bussing or something of the sort, so I'm usually not putting it on individual tracks. Using it this way I've yet to have it slow down my system in the least...

Overall, Cytomic's The Glue is some of the best bang for your buck out there for a compression plug-in. It has a very full sound that is fully adjustable across the board, giving you an almost endless array of possibilities. I definitely like using this mostly for drum bussing, as it has the potential to bring your drum set to life without too much fiddling around. While not as good sounding as the SSL licensed Waves buss compressor plug-in, it still sounds awesome and is actually a bit more versatile. I'll definitely take the trade off in sound as The Glue cost a fraction of what the Waves SSL Collection will cost you, as it's only $100 US dollars. At this price it's a must have for anyone interested in a great buss compressor on the cheap.
Did you find this review helpful?yesno
»

suntsu's review (This content has been automatically translated from French)" Better than Loctite ;-)"

Cytomic The Glue
5
No problem with installation, it is just a DLL. Concerning the use, it's a compressor and found all the features of a conventional compressor.

No problems with performance or stability to report!

I use it for about 2 years, the value for money is very good since The Glue has the same basic features as the version of hardware and software (Waves SSL Bus Mix) plus some quite substantial improvements!
I use this compressor mainly on the Master bus. If I had to make that choice it would not hesitate one second!

Micky201's review (This content has been automatically translated from French)" Terrible!"

Then!
A sound with impressive clarity and a potato. It crushes that of waves. I could compare them, that of waves is more confused in terms of sound, more granular. The Glue is clearer, more beautiful. It brings out details by giving them a dimension of space. The resort with its punch and impressive depth. On their website, they provide comparative records between the plug and hardware. The differences in some cases are inaudible, and other really small.

Try them!
The price was about him is quite reasonable: $ 99. And when compared to the competition, it is really low (especially for this quality).

Cytomic Updates The Glue to v1.1.4

Published on 03/27/11
Cytomic has updated The Glue to version 1.1.4, designed to offer improved performance and compatibility.

See all 24 photos of Cytomic The Glue »

Other names: the glue, theglue