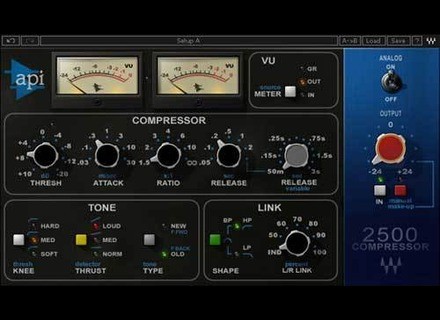 Waves API 2500 Stereo compressor
5
The API 2500 is a stereo compressor that Waves has created. It does all kinds of awesome stuff depending on what you're looking for. For one, it's a stereo compressor. Most vintage compressors are mono, but this can either be used as dual mono or true stereo. That alone can help create some awesome mixes. There are tons of different options in this that might be a bit over the head of someone who has never used a compressor like this before. On top of just having the basic compressor controls, there are also tone controls. These tone controls allow you to adjust the knee, thrust and style of the overall compressor.

This is a more versatile compressor, and I like using this on the overall mix. It works great on the master buss, and it can really start to pump up a mix.

This is one of my most used compressors when dealing with the more classic rock and hard rock music. I especially like using it on the master buss, but it can work great for pumping guitars and drums, too. I don't really use it on vocals, but I'm thinking I should probably give it a go. If you ever get the chance to check out this plugin, give it a run and see how it works out for you. Waves offers so many different plugins because they all have their own unique character. It's all about choosing what's right for that particular mix.

Waves API 2500 Stereo compressor
5
The Waves Ltd. API 2500 Stereo Compressor is a plug-in emulation of the analog version of the API 2500, and is a very good one at that.  The interface of the software is quite realistic and looks much like the hardware version.  Installing the plug-in was quick and simple as I didn't have any compatibility problems or issues otherwise.  It also didn't take long to understand what everything does in the interface.  It has basic compression parameters including threshold, attack, ratio, release and gain make up.  There are also options for the type of compression among other things.  The presets aren't bad as well and can be good starting points.  I don't have the manual for the Waves Ltd. API 2500 Stereo Compressor plug-in, but it isn't necessary to learn the software.

So far I haven't had any problems at all running a few of these at a time in Pro Tools.  I am running the Waves Ltd. API 2500 Stereo Compressor on a Pro Tools HD system and it has run very smoothly in the short time that I have been using this plug-in.  I've been able to run three or four at once, but I can't speak to how well it would run after that although I don't think it would be too much of a problem.  I've only been using the Waves Ltd. API 2500 Stereo Compressor for a few months as this is a fairly new plug-in on the market.

In the few months that I have been using the Waves Ltd. API 2500 Stereo Compressor I have grown to really enjoy using this powerful piece of software.  I have used it for compressing guitars and vocals mostly thus far, but it is definitely versatile enough where you could use it on just about anything that you would want to use compression on.  The price of the Waves Ltd. API 2500 Stereo Compressor isn't all that cheap, but is priced reasonably considering that it is a Waves plug-in on considerable power.  The sound quality is great and while it doesn't sound exactly like the original hardware API 2500, it does sound quite good and surprisingly warm for a plug-in.  I would highly recommend checking out the Waves Ltd. API 2500 Stereo Compressor and all of the new Waves API emulation plug-ins.

Waves' special offers for this Saturday

Published on 04/23/16
Today only, special offers are available on three Waves products.