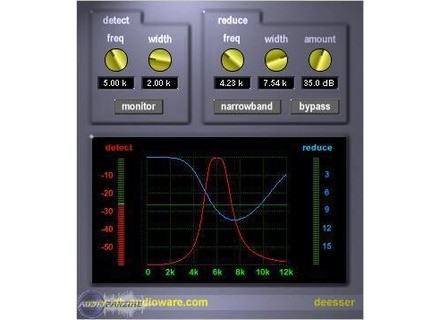 db Audioware dB-S De-Esser
4
DB Audioware's DB-S De-esser is a Direct X plug-in for Windows that I've used with Cubase SX. I haven't used the plug-in in a few years since I made the switch from Cubase SX on a PC to Pro Tools LE on a Mac. It should be a quick and easy process to download and install the plug-in; just follow the step by step instructions as you would with any sort of installation and you should be good to go. The make up of the plug-in is sort of unique for a de-esser plug-in, or at least I feel that it gives you more control than your average de-essing plug-in. It has two sections for 'detect' and 'reduce.' The detect section allows you to zoom in on the frequency section where you'd like to reduce sibilance with parameters for frequency and width, as well as a monitor button to check it. The reduce section has control over your frequency, width, and amount, with buttons for bypass and narrowband. All of this is tied together nicely with a graph that shows it all and makes sense of it all for you. It's overall pretty self explanatory, even though it does take some practice to get used to, but I don't think you need a manual.

I'm no longer running the DB Audioware DB-S De-esser plug-in since I don't run on a PC anymore, but when I did it was on a Hewlett Packard Pavilion dv8000 lap top that had a 3.0 Ghz processor and 2 GB of RAM. De-essing plug-ins aren't the type where you need to have many of them up at a time, but this plug-in doesn't take up much processing power anyway so I think you could run a lot of them at a time if you wanted to. Everyone's system has a different make up, so how well it will react really depends on your personal system.

While maybe not the most realistic sounding de-esser plug-in that I've used before, the DB Audioware DB-S De-esser has an interesting make up that sets it apart from other de-ssing plug-ins. It's easy to use once you get the hang of it, and it really makes it easy to zero in on what you'd like done. It's a better make up than your traditional parameters in my opinion, which usually don't leave space for specific frequency input. I wish that they would update this plug-in, as plug-in technology has come a long way since this plug-in was made. It is still worth looking into at this low price, or at least try out the demo...
Did you find this review helpful?yesno
»