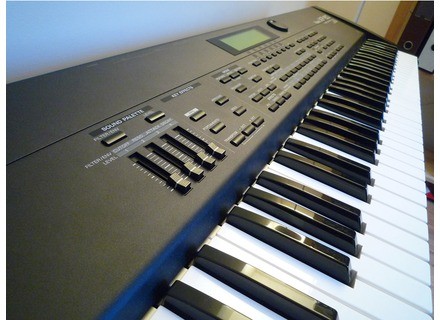 XP-80, Digital Synth from Roland in the XP series.

Roland XP-80
4
The Roland XP-80 was one of the main keyboards that Roland produced when it came out. It has 3 effect processors with over 40 different effects. Most of the main effects that liked were distortion, reverb, and ring modulation. You can use this keyboard as a MIDI controller too. This keyboard is great for electro music, dance, and even some techno. It has a built in arp that you can do wonders with, I loved working with the arp and effects; I was able to get some really cool sounds. There are over 500 presets on the XP-80 right out of the box.

The keys are velocity sensitive on the XP-80; they feel well made and will hold up for a long time. Most of these units that are still being sold online still look great even though they were made over 10 years ago. You can save up to 128 user patches and 2 drumkits on this keyboard.

The XP-80 has 64 voices polyphony and 4 oscillators per voice. It has over 100 patterns are loaded that you can use to play along with. All of your sounds are easy to go through and can be manipulated quickly and easily. This keyboard has great sounds that will fit many different styles of music. Using this synth is simple as well, it does not take along to figure it out and start using it like a pro.

All of the sounds are pretty realistic, there are a few that make you kind of scratch your head and wonder who really would use it. But with some effects and patience you can pretty much use any sound to your advantage. I have always loved getting vintage keyboards because they still have great potential and you can get them for a great price; a price that people would have loved to get them for when they first came out.

Roland XP-80
5
There are an abundant of features that are tweakable and fun to manipulate.

It's a Roland. There instruction manual sucks. Bought the video, the rest was cake.

Haven't gigged it, but wouldn't hesitate to take it to one. Built solid.

Out of all my equipment, this is one that I would definitely keep.

Originally posted on FutureProducers.com
Posted by: Unknown ( 1-, 2003)
Did you find this review helpful?yesno
»

Will75*'s review (This content has been automatically translated from French)" Workstation 90's but still very usable."

Roland XP-80
4
Everything has been said about the characteristics.

Once grasped the concept of tone / patch / performance, and understood that the recording project was via the method performance in "single", so good.
Editing sounds is really complete. Not easy but thorough, and actually quite well thought out.
The sequencer from the MC80 is really well designed. When it comes to go to other brands, we regret it one bit. Ability to edit each parameter (velocity, note length), track (eg I can reduce the velocity of 10 points on grades between F3 and C4. The beach can be reduced to a single note. Can be traced all notes from one track to another channel, duplicate etc.. Quantification quite effective.
The pattern mode allows for very fast loops and recording step is very ergonomic: selection of the duration of notes and insert silence via the keypad (similar to what will Sibelius). All this is fairly intuitive once we spent a few hours dessus.Architecture very full of what remains the highlight of the XP80. The internal resolution might be more accurate, but this is a very intuitive tool.
Four pedal jacks, two pairs of outputs, an output click, there's something to do ...
Effects correct, but it is not to die either.

Sounds pretty general, not bad for its time, but they may lack a little extra something. From the JV1080, but the converters and the effects are they the same?
The pianos are very typical, the synth sounds (especially the bass) are very good (lots of samples juno, jupiter in the box. The strings are frankly excellent. Mixed to have achieved true great textures.
on the other hand I think there are a lot of aliasing occurrence of unwanted harmonics (this means a great deal about the extinction of sound) on some programs that can get pretty nasty when superimposed.
Many expansion cards, which are not quite the same tone and (perhaps self-suggestion), however I see a tiny lag between the sounds (including drums) SR-JV cards and those of the internal memory. Psychological?

I use it since 1998. I did not try before you buy it, but I wanted this sequencer, which made me innumerable (countless) services. (And that makes me even for that matter).
I wish I had sound out of this world, but coming from a Yamaha PSS51 (I had my XP for 15 years), it was a notable advance.
With hindsight, it is the sounds that I like least, but a few need to know magnify.
For the time it was a very good machine, which lacked only the sampling. I spent days on it, and I copy the songs disks starting to age (very badly to my great regret).

At the price where it is found used, I think this is a good choice for projects entirely inside the machine or so for the live (many metalheads have used this keyboard, especially for the strings I guess). Otherwise, choose a computer with plug-ins. Less intuitive, but it will sound better.

mitt67's review (This content has been automatically translated from French)

Roland XP-80
5
Trs enjoyable touch to a synth (76 keys)! Connectivity level is impeccable: the twelve o'clock clbre trio is present, 4 + assignable pedals made for the famous 'Hold'! Stereo outputs 'Mix' (with effects) and outputs Stereo 'Direct out' (no effect)!

The BTE is not easy to take control of it ... It takes a long time and know it to make sure to master the craft is perfect for the XP80 ts complete! The large manual can help beginners if they have patience and take the trouble to understand (not always obvious ...)! Finally as with any need to linger a while to understand how it works in both edition edition of the sounds effects ...

The sounds of many bases suitable trs (mostly) to use 'all styles' (balls etc ...). APRS is s'quiper expansion cards for it to become more 'srieux' and if you make a style of music (I also advise the card "60's & 70's" for the sounds of Rhodes and Hammond!)

I use it now for about 7.8 years (more precisely, I dunno maybe more ...) and it always makes me wholesale services by The variety of sounds (thank you expansion cards)

At the time of its release WAS j'trouve the top and he is doing a lot today! Now I will surely one day to the new technology (Kurzweil K2600, Korg Triton ...) but do not separate myself from my XP80 so far!

Did you find this review helpful?yesno
»
Read the 9 user reviews on the Roland XP-80 »

Roland XP-80 manuals and other files