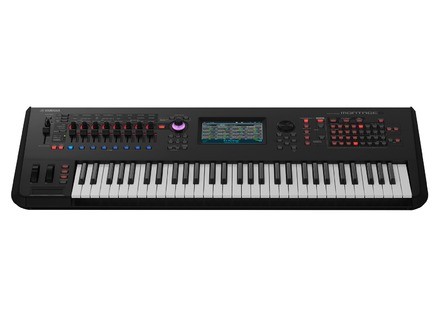 Montage 6, Digital Synth from Yamaha in the Montage series.

View all offers for Yamaha Montage 6 »

Yamaha Montage 6
1
After 3 months spent watching videos and dreaming to lay my hands on this new synth, the day has finally come.
As an owner of an MO6 and Motif XS, I really believed the Montage would be Yamaha’s most elaborate synth, but in the end the longer the wait, the cruellest the disillusion.

The mere unboxing step already reveals a rushed product: the machine lays in a hastily rolled plastic cover with four old-looking yellowish tapes on the corners, a power cord and a hastily written manual with blurry pics and little explanation at all…

Quickly plugged on, but a sturdy stand is necessary as the keayboard is particularly heavy.
Manufacturing quality is good, it gets turned on in no time and everything works so no problem so far.

This is the moment you’ll want to listen to its sounds.
Here comes the first surprise: everything is messy, hard to find anything and the so-called “performances” include complex sounds featuring arpeggios, motion control and other basic –effectless– sounds…
And there are many crappy sounds that’ll never get used… HEY, YAMAHA, you DO know that not everyone buying this kind of keyboards is a programmer, don’t you? There are also musicians who don’t want to wait for two years before being able to play something interesting!

This is a bitter disappointment, as except for perhaps ten sounds nothing is even just playable, let alone the rhythms that were forgotten on most sounds – the same goes with the arpeggiator.
While we’re at the arpeggiator, it’s way too complicated – so much as it’s almost unusable, plus too many steps are necessary to just insert one.

The designers of this pretty toy wanted to please themselves, but in the end this synth is like a cake with so much flavor that it just ends up being plain disgusting – and there we are, you can’t find anything intuitively and making the best out of the Montage requires spending thousands of hours.

So you spend your time toying around with ordinary Voices – the same you find on a Motif, except that the Motif’s performances actually do the job.

I’m sorry to only be able to give a musician’s advice, in contrast with what an electronic genius’s might be so perhaps this device wasn’t designed for me but they really could have included great sounds – especially considering the many blank memory banks.

In the end, the Montage is a last-generation war machine without an ammo, and Yamaha provides a half-empty box. Now I understand why all the demos and videos feature the same PEARLS, DJ and piano sounds – as usual.

I feel like I’ve thrown 3000 euro away, and all I can do now is cry over it while trying to sell it.
Did you find this review helpful?yesno
»

View all 34 videos of Yamaha Montage 6 »

Listen to the 33 audio files about Yamaha Montage 6 »

Yamaha Montage 6 manuals and other files

View the 38 files about the Yamaha Montage 6 »