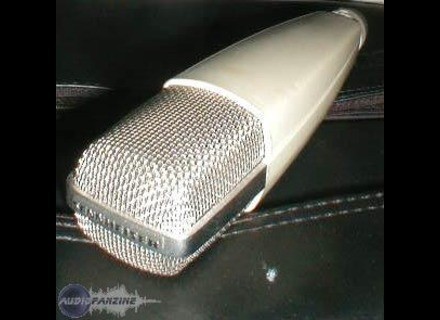 MD 421-N, Dynamic Microphone from Sennheiser in the MD 421 series.

Sennheiser MD 421-N
5
The Sennheiser MD 421 N is a dynamic microphone suitable for both recording and on the stage. I have used it primarily in the studio, but would definitely work well in both applications as it is sturdy and is overall a great dynamic microphone. Unlike later versions of the MD 421, it doesn't have the bass roll off. This isn't that big of a deal as it definitley sounds just as good if not better than later versions of itself. The silver/white shade of this microphone is also unlike other versions of the 421, which are usually black. The silver color has set this microphone apart to be recognized as a different version of the classic 421 microphone. It also has a short (about two or three feet) male XLR cable connected to it that I usually plug an XLR microphone cable into to send to my board or audio interface.

I've been using the Sennheiser MD 421 N for about two years. Those who know about the 421 know it is great in a number of different applications. I love using this microphone for tom tom drums, electric guitars, and bass guitar cabinets. It seems to have a slightly warmer tone than the modern 421, and is around a similar price as well. I would describe this microphone as a slightly fatter Shure SM57. The price is about the same price as a new 421 which is quite reasonable for such a great sounding microphone. The MD 421 is an industry standard in recording tom drums and has been known as a great all around dynamic mic. While I can't say this is better than any other version of the MD 421, as they are all great, this has its own look to it and if you looking into getting a used 421 this is just as good as any 421.

meltear's review (This content has been automatically translated from French)

Uh, I find great
cheap for what it is.
march marvel (super classic) on copper and toms.
I accuracy of all as mine was a Telefunken 60's.
good cash
the model depends on which one falls, but generally very obnne sensitivity for dynamisuqe.

enough imilaire at 441 I have found.
Did you find this review helpful?yesno
»

bolodoi's review (This content has been automatically translated from French)

I am the he gave 'a few months, I find it very versatile
I don 't use it for guitar and bass drum I like the sound it gives the voice, the more his look very 70's (remember the guy Carpentier or lux) I like a lot,

it is also very typical in the seventy's me I worship! But that is not the case can be for everyone, in short very versatile micro excellent cash very very good bass