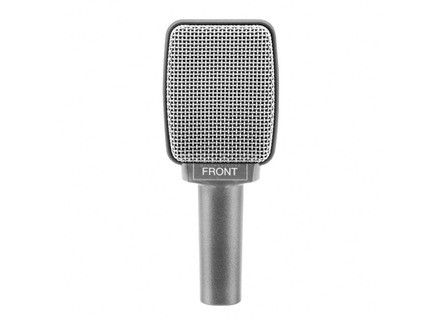 e 609 silver, Dynamic Microphone from Sennheiser in the evolution 600 series.

Sennheiser e 609 silver
4
The Sennheiser e609 is advertised chiefly as an instrument mic, and at that it excels. As advertised in its description, its shape makes it excellent for miking not only guitar cabs but also various drums (especially toms, and it also gives a unique, slightly diffused sound when use to record kick). The microphone does a bang-up job of preserving the clear tone of these instruments.

That's about where Sennheiser's description ends, and the e609 greatly exceeds it. As you can see from its $109USD price, it's being marketed primarily towards beginners in need of a microphone for standard studio instruments like guitar amps and drums. The sound quality is comparable to similarly budget, studio-standard instrument microphone the Shure SM57. However, the microphone's interesting shape and construction give it a clear resemblance to the iconic Sennheiser MD409, and share's that microphone's excellent work with horns and loud vocals.

Though the mic's high SPL capacity is mentioned by Sennheiser, they fail to mention how well it works with belting or harsh vocal singers (or simply loud, clear vocalists) in addition to loud horns and some woodwinds. Though it lacks a built in pop filter like other popular vocal microphones (like the near-universally used SM58) when used with an external protection its sound is remarkably clear where other microphones fail to deliver. The same effect occurs with brass and other loud instruments. This combined with its unusual shape create an excellent alternative for vocalists who do not like the traditional vocal microphone design.

THE BOTTOM LINE: As a budget instrument microphone, the e609 measures up to similar studio staples. Although its sound quality is limited to similar models by its price, its versatility and usability as an alternative vocal microphone well makes up for the nearly unnoticeable difference in quality. The Sennheiser e609 is one $109USD mic that can do the work of three.
Did you find this review helpful?yesno
»

Sennheiser e 609 silver
4
The Sennheiser e609 is a great dynamic mic for recording guitar amps both in a studio and live setting, as I have used it in both. I put it right up against the speaker and it comes out great most of the time (of course depending on the amp, guitar, player, etc).

I've had this mic for about 3 or 4 years now and although I don't use it as much as I used to but it is still a great option for recording guitar amps and I love having it in my arensel. Compared to a Shure SM57, it has a pretty similar sound to me, and I do prefer the Sennheiser 421 on guitar amps over the e609. However, for the price this is a great mic to have around. Although they say it is also great on toms, I could never get the right sound with this over a tom tom and it was a bit hard to place on it. Overall I would definitely recommend this mic to someone who is interested in having a new option for guitar amps, but I would also recommend having a Shure SM57 and a Sennheiser 421 to compare it with.
Did you find this review helpful?yesno
»

Accessories in the box: pliers suitable for micro, (so as not to lose or exchanged with another), micro (required), pretty lightly padded sleeve:

Very easy to use: branch and have it work, that's it!

Purchase a particular member of AF, very nice all round for 120 euros!

Micro rectangular grid with very strong protection and an indication of "Front" on the bottom of the grid so as not to Gouré on the face of sound recording.
Very tough, but not to drop anyway for fear of spoiling the beautiful screen that way.

Used on a session (testing and recording a day), taken in close to a percussion style cajon (untreated and taken his savvy on the vent).

First conclusion: ceremonial like a big boost in the bass if not leveled and is still quite difficult to make up if were not doing it before (at the table for example).

Second conclusion: the second test on a bass amp, although very successful, much more with the cajon, unfortunately, it is not considered by the specifications of the microphone, but I was convinced it would give a conclusive result.

So I made this test with a pop filter placed in front of the bowl of the amp (5cm) behind the micro anti pop and oh! Miracle of Science, the catch was really good and focused all the roundness of the bass, without even equalized in the table before or after dosing.

Finally, Senneheiser do not advocate this type of decision (ie, bass amp), this type of microphone, but advising the E602 II for that info, I wonder if he did not Gouré on the call to hear him?

Most to the micro is that it is sound and the sound to the bass amp really surprised me.

The least is that it is not really convincing to a power of percussion!

Price / quality ratio very good for a mic this small class, especially as for his body strong enough to withstand the shocks of a wand, for example.

Yes I would do again if the choice I had to buy a second.