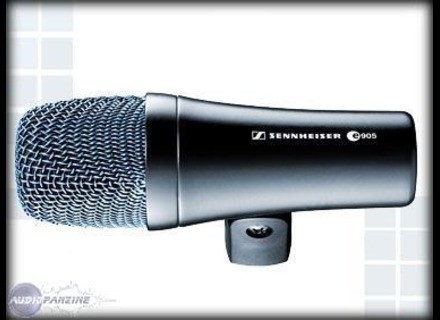 e 905, Dynamic Microphone from Sennheiser in the evolution 900 series.

Sennheiser e 905
5
The Sennheiser E 905 microphone is another one of Sennheiser's E 90x microphones, which along with the E 60x microphones, are intended for use on drums. The E 905 is a bit strange, as it is a microphone designed specifically for applications on a snare drum. The E 60x line lacks an equivalent microphone. That being said, the E 905 is a quite good microphone that will give you some very nice hits from a snare, and it is a good choice if a person is very intent on mic'ing up a drum kit very meticulously; I am no drummer, so I am not. However, the snare is an instrument that often needs more processing than others, and it is nice to have a track dedicated only to the snare.

The Sennheiser E 905 microphone is a dynamic microphone specifically engineered to use on a snare. It is claimed to have a very fast attack time, and the short body makes it less cumbersome to stick on a snare: a huge advantage. It has a standard cardioid pickup pattern and a rather impressive frequency response range of 40-18,000 Hz. This all comes together to bring forth an element of the Sennheiser E 905 that I am absolutely enamored by:

Remember when I said that the snare is important to mic up individually because it is often an instrument in need of EQ? Well, when you decide to use the E 905 to mic it up individually so that it can be EQ'ed, the snare just so happens to lose that very need to EQ.

I should consider it a blessing that I am not a drummer, because when I talk to my drummer friends, their minds seem to wander toward the $1000 they spent mic'ing up their drum kit with BUDGET drum microphones. However, the E 905, along with most of Sennheiser's Evolution instrument microphones will give the user the flexibility to tweak the sound, and quite frankly, less need. I wholeheartedly recommend this microphone to anyone who wants to mic up their drum set and has a bit of cash to burn.
Did you find this review helpful?yesno
»