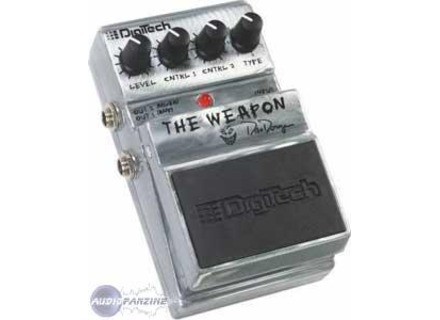 The Weapon - Dan Donegan, Multi-Effects for Electric Guitar from DigiTech in the Artist series.

DigiTech The Weapon - Dan Donegan
5
music store for $175 comes with a power supply so it is worth it.

I believe the first single effect to come with an adaptor so this is one of the first digitechs to not have any complaints.

being it is called the weapon tank would seem to fit.

if you like effects and distortion buy it i wasn't dissapointed. Bass players should use more effects than they do and with this pedal you can get wild sounds.

samazn's review (This content has been automatically translated from French)

DigiTech The Weapon - Dan Donegan
4
Mainly the distortion, an octave and simlation Sitar

Configuration is very simple, the knobs let you select the effect and rgler the level, depth, acute (no gain, which is a shame).

Distos 2 + 1 phaser which I find quite convincing. It's clean, it's net despite a breath that I find quite large (normal, there is no "noise reduction) The distos are very good quality there is nothing wrong, CA can be used for metal as in rock, I love it. Good sitar is average, accessory.

Well, it's small, it's practice, are hyper sounds convincing, in my case it avoids me to walk all the time with my Zoom g2 tt. Is nickel. I remake that choice again.
Did you find this review helpful?yesno
»

enzobiwan's review (This content has been automatically translated from French)

DigiTech The Weapon - Dan Donegan
5
Dan Donegan Signature This Weapon (Disturbed guitarist) uses all digital and does not connect to a computer. Only output jack is Submitted. The effects available are: distortions, a simulation INTERESTED sitar with reverb, pitch shifter, reverb ...
His true particularity it offers sound by Dan utiliss taking into account the final mix to disk, which allows him to sound like the CD and not like him in the studio. For its close to the original, it gnial.

An easy to use basic and logical, the buttons are intuitive. Not need to be a pro out of tones, just choose the type of sound with a button and then configure its features with other buttons.

Trs good sound, but the original Fidler paramtrable which lets you customize the sound. I use it on Fender Start or Epiphone Les Paul, no problem. Notable among the distos, is really a standard and can do good without seeing a big mtal mtallique her too, despite the absence of lights on the pedals. A standard power!

I've had a good year and I find that type gniale so do not use 100% of the time, unless we do as mtal, although sr. I find it much better than the BOSS MT-2 I had before, it sounds much more real, we believe there is less mtallique has not betray the sound of the guitar to Originally, the purchase of this Padala is a choice I do not regret. You should also know: the transformer is provided! It is rare, it is necessary to emphasize ...

Hagen8's review (This content has been automatically translated from French)

The effects are convincing without achieving perfection (a little breath on the distortion, lack of depth on the sitar ..).
Personally this pedal will help to expand my repertoire, I love distortion "neo", the effect for sitar sounds Eastern and phaser with simulation of the second guitar distortion, as if a second scratch rose slowly the sound of his amp.
I play on a powerball with a custom K-7 and ESP viper Dropped D and it makes very good (obviously).

I've had two days and I really have fun as a little crazy.
As mentioned above the distos are really convincing and the effect sitar enriched my repertoire.
For 65 euros a magas U.S. (new), I think I would definitely do it again this election!
I edit in terms of, when I have a little more used.

See all 36 photos of DigiTech The Weapon - Dan Donegan »