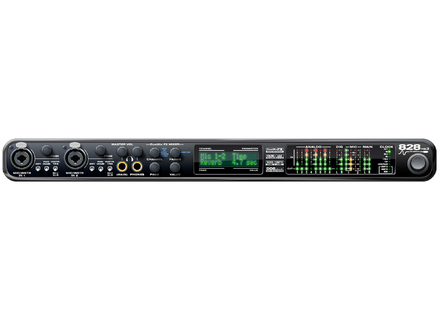 828 mk3 Firewire, FireWire audio interface from MOTU in the 828 series.

MOTU 828 mk3 Firewire
3
The MOTU 828MK3 is a firewire or a USB connected interface. The manual was easy to read through and understand making the set up process very easy. It is rackable taking up one rack stace and it also has on board effects. The support with this product is not very good though I remember having some issues when working with it on my Mac a few times and contacting them about it got me nowhere.

The DSP effects are built in are a huge plus for any user, there are reverb and EQ plug ins to use with any DAW that you enjoy working in. The preamps are decent, not the best that I have heard from MOTU but not the worse either. This interface will work on a Windows and Mac system and it works great with ASIO drivers as well. It comes with software called AudioDesk which I only used one time and didn’t like it at all but I guess if you are a new user then it could work for you but you will outgrow it and want to do more. It came with software called CueMix FX too, which was great!

This interface does not seem to be built as well as other MOTU interfaces and it seems like it could have issues if it is used and abused. But it does come with a warranty for 2 years from them so if you have any issues you can always return it. Hopefully it is a hassle free return.

There is a small LED screen that is backlit, it doesn’t have the best quality but it is not bad. It is easy to read and see what you want to do on it but it is not very graphical. This interface is average at best to me but the plug ins that comes with it makes it worth having because they are worth the money.
Did you find this review helpful?yesno
»

* To replace an analog mixer, which would be much more comprehensive but also heavier. Now I want to buy a Motu 8Pre or a Presonus Digimax FS to add eight mic preamps.

- Do you use it with other instruments or systems (mixing console, preamp, DtD, ...) and what's your setup?

* If I want to add a drum kit I will need to connect the Digimax FS preamps via ADAT and I insert noise gates on the bass drum, snare drum and toms.

- Did you have any problems during the installation?

No installation problems with my Mac. Th computer had already an old Motu UltraLite driver. Once I removed everything (all files and their locations are listed in the documentation), I downloaded the latest driver release (1.4.8) from the Motu website, I updated the firmware (1.0.6) and everything went sweet.

- Did you encounter any incompatibility problems?

- How complicated is the overall configuration?

It's a breeze with CueMix. It's a bit more complicated but still ok if you only use the front panel. But I also take my Mac with me so I never make the settings on the front panel.

Yes. Some details are still not totally clear to me.

Yes but when I rename the tracks in my Mac the Motu Channel Name software crashes.

- Which software do you use?

Logic Audio Pro and I will buy DP5 because I heard CueMix is directly accessible from DP.

- What's the latency of your system?

I haven't measured it because I'll use it mainly for live applications.

- How many tracks can you record/playback simultaneously?

* Most: integrated compressors (forget about all those heavy racks), EQs like on a real mixing desk, reverb (but not really necessary for me).

* Click noises in both mic preamps (digital adjustment of the analog preamp's gain with an endless knob). It's a bad joke, considering the price!!

* I miss a noise gate with a parametric side chain on each channel instead of the three compressor types (very useful for drums).

* CueMix can't manage mono outputs so you have to create several mixes and manage the pan for mono monitoring mixes. A future CueMix update could solve the problem.

I've had an Hercules 16/12 FW and I was very satisfied with it but I couldn't use it as a mixing desk, a Motu UltraLite, which is very good (however the 828mk3 has a compressor and an EQ per channel) but it is not rack mountable and thus seemed less reliable to me.

Great: I use it as a digital mixer for a small band and the price is reasonable. I bought it on sale (new with a two year warranty).

Yes considering the sound cards in this price range. But it would be great if Motu added noise gates and created a rack mic preamp with outputs (like the Presonus Digimax FS) because the Motu 8pre has only mic inputs.

I've been using it regularly for four months (including two live gigs). With a Presonus Digimax FS I get 10 mic and 8 line inputs, a group for drums via SPDIF toslink (more convenient to control the full drum kit and to sum it to the main and monitor mixes). I also add an UltraLite (for its two mic inputs) via SPDIF RCA. I have an EQ in almost all inputs and a compressor on the bass drum, snare, toms and vocals channels.

It's great for live gigs: just make the monitor mixes and don't mess with anything else. It's ultra convenient and it works great (no crashes working 18 hours straight).

No DSP overload (CueMix prevents overloads during setup and disables the effect).

To wrap it up, it's a very expandable mixing desk.
Did you find this review helpful?yesno
»

MOTU 828 mk3 Firewire
5
I got this a while back because I wanted to upgrade my converter at home and simplify my setup a bit. This converter does those things very well and more, there are a lot of features in this thing that you might not realize. I use it as a preamp, converter, monitor mixer, and for FX on the monitor mix - all in one rack space. This thing is basically great. I'm running a PC setup with Nuendo, Dual Core processing, and 4GB of ram. This connects with firewire though and the processing is done in its own hardware, so your computer doesn't affect its performance really. I use it for microphones and also with DI instruments.

Installing this is a cinch. It's firewire, so you don't need to crack open your computer case or anything. You really only need to worry about three things: Install your drivers from the CD they give you (though you should check on their website for updates), plug in the power cord, and plug the firewire cable that is provided into your computer. If you have a second soundcard or internal sound in your computer, you will likely have to tell your host which one to use - but other than that setup is very easy. I have no compatibility issues. They have a great manual which is worth reading to get the most out of this box - it's pretty think but they have the same information in many languages.

The drivers are updated whenever bugs are discovered as far as I can tell, so no problems there on my system running Nuendo. One of the best things about it is that you can monitor with zero latency. The driver disc has CueMix software which lets you make your own monitor mixes out of the inputs that come directly from the unit itself for zero latency. On top of that, it has built in FX processors so if you wanted say some reverb on a vocal recording, you can do that with just this one box. Pretty awesome. For audio recording purposes, you can get 8 simultaneous inputs, but one of the drawbacks is that that is mostly 1/4&quot; inputs - you only have 2 XLR spots so if you're recording a live band you'll want to have some XLR to 1/4&quot; cables.

I've been using this for a couple years now. I love the versatility and the amount of processes this thing can handle by itself, it makes recording much easier and more streamlined for me. I've used a variety of converters, and while the pres and A/D don't sound like they cost $20,000 - for a home studio they are more than enough. You are getting a great deal for the cost - this would have been unheard of 10, 15 years ago. I'd get it again, I love this thing.
Did you find this review helpful?yesno
»

MOTU 828 mk3 Firewire
5
I am asked my opinion.
As I have not much time, I will say that my card is on 24/7.
I never extinguished.
And uses it for everything, watch my films, or making music, I have a very good sound, and I have no problem with.
2 years and 2 months non stop?

dropoff Window
Did you find this review helpful?yesno
»
Read the 20 user reviews on the MOTU 828 mk3 Firewire »