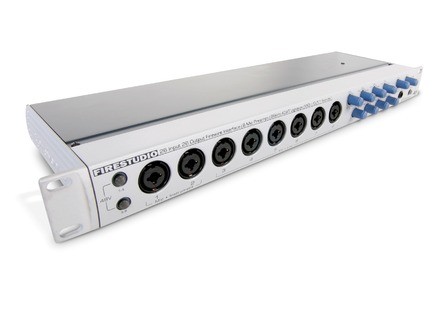 PreSonus FireStudio
4
The Presonus Fire Studio was an interface that for the first time I used at the School that I attended a year ago. They had a few of these in different rooms (mainly the second studio rooms and no the main ones). The Fire-studio seemed to work great and do exactly what it said it would do. There was nothing that really stood out with it though to make me want to go out and buy it for myself. It had enough ins and outs to power your whole band and record them all at the same time. That would be the only reason I would suggest someone get this is if they have drums recording into it and guitars and other instruments for a big session. But if your just a one or two microphone type of set up there is no purpose to have this.

I am not sure if the drivers where updated at all during the year I was using it. We recorded up to 4 or 5 tracks simultaneously without any problems, we actually used this interface to record into the “student” version of Pro tools and it worked just fine. I have heard that it was a pain in the butt trying to get pro tools to recognize and work with it though. But this isn’t something I have personally dealt with.

The Manual is extremely clear and well written, I had to use the manual several times when working on new project that would require different set ups. Each time I had to reference to the manual, it was easy to do and I got right to it without any issues.

My favorite part of working with the Fire Studio is how easy it was to record so many things at the same time instead of having to record one person/instruments take and then start over and record something else. We could just run right through our projects and assignments pretty quick. The sound quality (as long as you are using good mics) will be great and will give you nothing to complain about. I have tried a lot of other models of PreSonus interfaces and all of them seem to be great.

PreSonus FireStudio
4
The Presonus Firestudio Project has excellent quality XMAX mic pres. these pres have neutrik combo jacks which accept traditional 3 pin XLR or 1/4" phono plugs. Although i put a preamp in front of the firestudio, these mic pres are certainly good enough to use without any outboard gear.

Presonus includes Cubase LE4 recording software and a decent tutorial dvd to get you started. The 48 track software is more than adequate for recording your entire band at once or doing track by track recording for solo musicians who play all the parts themselves. There are plenty of plug ins included to help add spice and partiality to your recordings as well as produce broadcast quality masters.

Presonus includes all necessary hookup wires so there is nothing else needed to get started as long as you have a pair of headphones or some other means of monitoring (which by the way presonus made making great monitor mixes a breeze).
All in all, the Presonus Firestudio Project is a great, easy to use firewire interface that can be used as a mobile recording setup, a front end for your home studio or as a mixer for your live performances. When quality counts (as it always does), this is a very inexpensive (and expandable) solution to your digital I/O needs. Purchase with confidence.

Overall, I was able to track the entire band and send each musician a separate headphone mix using the built in mixer and several hp4's. Everybody was happy with the Firestudio Project. The drum sounds we got were really shockingly good. The drummer kept asking me what preamp and eq we were using. I tracked all the drums flat with no eq or compression - just the preamps from the Firestudio Project. Cubase LE4 is a HUGE step up from LE as well. Although I'm probably going to upgrade to Cubase4 soon.

PreSonus FireStudio
1
Entries The number and d'avoir need a "big machine" Studio motivated my choice for this interface.
I have an iMac with 4GB of Ram and I use Logic Pro Studio.
I play semi-pro music.
I have a big mixer and a lot of keyboards, guitars and basses.

I CORRECTED EVERYTHING I SAID. EXTREMELY UNSTABLE INTERFACE AND VERY POOR QUALITY OF DRIVERS

STAY AWAY, HE PREFER THE maudio PROFIRE 2626 EXTREMELY STABLE AND WITH ITS THOUSAND TIMES BETTER.
BRIEF! THE FIRESTUDIO PRESONUS IS FUIRE-
Did you find this review helpful?yesno
»

toskidus's review (This content has been automatically translated from French)" Presonus FireStudio 26x26."

PreSonus FireStudio
3
8 entries combo jack / XLR make a small mixer. outputs too.
we play as a group with a bass guitar, a stereo keyboard, vocals and electronic drums.
Each musician personalized headphone listening. (The top for rpeter)
The PC is a Toshiba P300-220 (PSPCCE) laptop (proc: P8600) 4 GB of RAM under Windows XP. I added a hard drive go 600 7200 r / min, but the original 5400 rev / min cashed as well.

The drives are often (5 -> 10%) of the time of interruption, loss of data (config).
More on my config it take 20% occupancy processor lighting the carte.J 'have a generic firewire chipset. I bought a firewire / expresscard card chispet texas instrument does not change much.
On my fixed config Husky (I7 2600k ssd / 8 gb ram) the driver takes 10% (firewire card chispet Texas instrument purchased from kalea computer.)
I use Cubase 5.
You can record eight tracks simultaneously. The SPDIF input is very temperamental. (Too)
I do not use my system (mobile) requesting latency. I did test can have a latency of 5 ms buffer card 128 using one or two plug-ins without it cracks (equa + reverb on track live)
but do nothing else running (not curly synth ...)

then the system is stable.

The card is no longer sold there is no new update.

Installation is simple. must update the firmware if it is not already.
The config needs to be addressed but it is normal considering the possibility.

incompatibility: The occupation processor shows that it takes a particular hardware configuration that only a specialist can optimized.
I had a set with a P4 3 ghz firewire card chispset the integrated VIA processor occupancy was negligible compared to the idle mode (idle = no action) ... (will include Charles)

What I like most is that it replaces a mixer'' Acquisition'' in addition to being a sound card.
what I like least is the instability on the drivers.

The value for money is good considering the price of the competition (rm-universal audio ...)

I think I will not repeat that choice and I save to make the most stable malt. But must also follow the PC so it is always a history of investment (money).
Today I still use the card rehearsal (it manages clik for the drummer) + samples and we can make some nice models. In terms of studio recording experience I have is rather positive. it is the enlightened amateur home studio.

Did you find this review helpful?yesno
»
Read the 13 user reviews on the PreSonus FireStudio »

See all 272 photos of PreSonus FireStudio »

PreSonus FireStudio manuals and other files