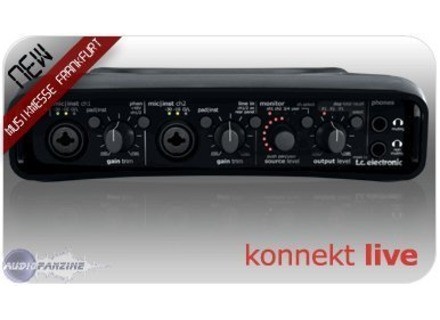 2nee's review (This content has been automatically translated from French)

TC Electronic Konnekt Live
5
The motivating CHARACTERISTICS: its pramplis, converters,
24 bit / 192 kHz
Used with a MacBook Pro 2.16 GHz and a workstation: Fantom X7
All connectors are Submitted: XLR, JACK rts 6 "35, al Rca rear, SP / DIF input and output, ADAT input and output
The PC interface "TC Near" is so easy to configure (if you had an incomparable of EMU 1212M)

The first drivers were unstable t trs, but upgrades are plutt Most recent internship positive although it there was still a bit to optimize stability.
The updates are frquentes and regularly.
The software used is clearly ABLETON LIVE
j wins a low-latency, all remains as a Manir trs variables following the performance of the computer, possibility to set off the direct monitoring and costs directly with the branch on the headphone interface.
Latency infrieur a total of about 10 ms at 24 bits / 96 kHz with my MacBook Pro (imperceptible)
I have no time for that record on two jacks.

I used the last 3 months
ptite the beast is 690, but even when the price quality ratio is excellent!
with exprience, I would do the same choice without HSITER
THERE is nothing I do not like n!
Did you find this review helpful?yesno
»

Orlan Wild's review (This content has been automatically translated from French)

TC Electronic Konnekt Live
4
The quality of preamps, and effects in DSP-TC
For recording studio, live and play.
I use a MacBook, 2GB ram, and the program Ableton Live mainly.
A guitar through a Vox ToneLab the optical input, one of Rhode NT3 microphone input, and the other Mic input, a sensor type cramique.Sur the LINE 3 / 4, a consle mix.
I put 7 as the price you could have an input line over and above 2 OUT supplmentaires.

Easy installation with TC-updates
In beginners, incompatibilities with my Vox ToneLab, but simply because I did not set my clock external.
The manual in french is okay, but above all, the top is the support via the website of TC, and c is clearly a plus.

Must updater to make it stable, as often must restart the computer so that the card is taken into account when it is powered by the firewire-

For 1 month
the quality of pramplis, and effects in DSP-TC
I possdais before ozone MAUDIO as a sound card, it's of course not comparable-
For the price, but quality is the most wanted IO, ever, beh Voui.
I would do this choice, without hesiter.A least, so the same TC with more input-output!
Did you find this review helpful?yesno
»

slyooney's review (This content has been automatically translated from French)

TC Electronic Konnekt Live
5
This is my first FW card.
I wanted something highly compatible mac / pc, not too expensive and that makes sense.
I did not want M-Audio, MOTU, Focusrite and other cards deemed semi pro but are poor either in hardware or the software.
I was going to purchase a Tascam FW1604 when I heard about the Studio Konnekt. After making inquiries, I said that before fall for something like the oversized SK48, it was better to make the teeth on a product roughly equivalent in quality conversion / preamp with less E / S.
So after a long detailed study of the various forums (especially English) I am a Konnekt live in your hands!

the config on which the card is connected is in my profile.

RAS if you have a clean computer
In my case I had just reinstall everything unfortunate result of manipulation ...

The driver ... that's what scared me from reading the various problems encountered by users on various forums ...
Well except that the plugs fabrik are not yet fully usable mode plug in, nothing to say! drivers seem to be updated regularly. Remains to be seen over time but for now I'm satisfied.

<p class="bbcode-cite"> Quote: <span>- What you get lag?</span>
Latency of 256 samples at 44.1
<p class="bbcode-cite"> Quote: <span>- How many tracks you get to record / play time? ...</span>
I have no plans yet large enough to see the limits of the card (tested with acid project of 60 tracks filled with vst and nothing to report, it does not budge.

Most of the card:

- The sound ... how to say ... I had an Echo Layla 3G card before. I would not say it's day and night but it is clear that TC is very high with this card. Acute detailed, full and round bass, I discover things that I missed with my previous card.

- The driver, the user interface of the software involved - now ended - a ergonomics competition in the price range.
The driver is damn well thought out, works seamlessly in the background and is totally stable in its latest version (even BETA)

- The quality of integrated plugs, associated with the preamp, it has a pair of strips of quality TC.

For the price, it buries everything I've experienced so far then yes without hesitation, I would do this choice.

EDIT: after a few months of use, I confirm the advice given hot.
The plugs work very well in the latest beta.
Did you find this review helpful?yesno
»

kimosaabi's review (This content has been automatically translated from French)

TC Electronic Konnekt Live
5
I was looking for a sound card "nomadic" because I mix in Traktor Pro and I consists of Cubase (SL3), so I needed a sound card is both efficient and convenient transport in a studio in my dplacements DJ.
Recognized the quality of TC Electronics (dja I used the Finalizer and the Fireworks in the studio), FireWire connectivity, and internal processseur this card have motivated my choice!
... As the price

Like everyone else! I deleted the drivers for the sound card of origin.
The config gnrale on the other hand is a bit complicated because so vast in selection, it is necessary to test all possibilities to find comfort (rglages the DJ are not the same rglages the studio, for example).
It took me time to understand how to use the Fabrik C compressor, simultanment
with traktor ...
The manual is also clear that all the manuals, if you know what I mean ..

Ultra-stable drivers! 2 updates since my purchase (November 2007).
With Traktor Pro, I get a latency of 5.5 ms, an impressive stability and sound
Phra make more than one incrdule .. I tell you not to play on the kif Funktion One or HK Audio .. Konnekt Live up to its name!
With Cubase, the stability is to go, and latency varies with the number of tracks and VST audio simultaneously. The same must test several rglages depending on your configuration.

I attack with my 2nd year! Not even tired the chip, and believe me, sometimes it turns 12H in a row

I like its ergonomics, the quality of sound components utiliss TC.
I regret that there have no more than two trips ... That's my only regret.
I worked with the Terratec Producer andthe Digidesign 001 before acqurir.
The report quality price good silent in 2007, he was excellent in 2009, as the price has dropped.
I would do this choice, yes!
Did you find this review helpful?yesno
»
Read the 7 user reviews on the TC Electronic Konnekt Live »