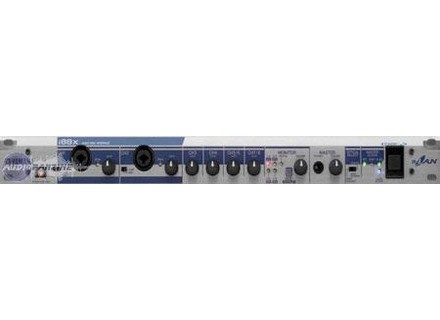 Yamaha I-88X
4
The features are good and the plugins are awesome. MLAN can be difficult to work with but once running it tends to run pretty flawlessly.

It is easy once it is setup but because of the MLAN update it can be a little tricky.

I have moved twice and never had a problem with it. It is pretty bullet proof.

I am always looking for better interfaces and pre's but I have had this for a year and can't find anything worth replacing it with unless I go to a protools HD.

Yamaha I-88X
5
For both instruments preamps mics worthy of the DM 2000 console in the same brand. Its multiple
input-output (adat, spdif ...)

quite stable once installed. low latency, expandable via a 01x which allows
have a total of 18 physical input plus 8 ADAT in.

The installation went without too many problems, but the only problem is size, is to understand
the MLAN and routing capabilities, requires break head to begin with.

dsiBel's review (This content has been automatically translated from French)

Yamaha I-88X
4
I bought it in addition to the 01X as wanting to have more entries, after much research, it is a priori the only audio interface / midi mLAN compatible to 100%. At least until my purchase in February 2005.
More details for the characteristics.
Just a few remarks:
- The finish is impeccable. The knobs are sturdy and comfortable to hit (as opposed to 01x). It smells really professional. Besides, I have never seen as big an audio interface, it is almost on 1U 30 cm deep. One downside: I can not screw it on both sides of the rack! I'm changing place but impossible. The distance between the attachment points are not standard in my opinion (all the other stuff yet come good in my rack)
- The two famous preamp are really famous (yet unlike the 01x). At the entrance one is a choice of Mic, Line and Instrument. I tried with a passive bass guitar, bass drum or condenser microphone (voice or overhead), it's done! However, I prefer to use an external preamp (goldmike) for voice. Downside: there is a knob for channels 5 / 6 and 7 / 8. But hey it's something common. But for the price yamaha could have done a bit of effort because the practical point of view it is not cool.
I have a PIV 1.8 GHz - ABIT BL 7 CM - 512 MB SDRAM - Map FW I do not know masi NEC chipset (who said that NEC did not mince with mLAN?)
Soft Cubase SX 2 - Soundforge 6
NB: Juqu'à Now I've never used as an interface only but normally it should work

Then there is the darkest part of the picture.
The installation (01x and i88x) was cacastrophique. I had come to end after a month and a half nightmare. Finally, I realized that was my cart FW was the origin of pb (perx via chipset, the mLAN driver recognizes as Siemens!) Through a friend who gave me all his bath ( as said above I do not know the brand but its NEC chip ets and mLAN driver recognizes it as such)

The drivers are supplied with leave to oblivion. It is advisable to download the latest driver (for my part I think it's the v 1.5.3). I put in master 01x, i88x in Slavic and PC. So when everything is set up we have much to worry about.
I use it mainly for recording group of3 to 4 musicians including a drummer who holds the 8 entries i88x. With the 01X, I can record 13 tracks simultaneously. I configured GBP to 16 but not yet tried to use them all. Naturally, given my config, I put a fairly high latency (19 ms). So no vsti. CPU at 20% + in this condition. The monitoring is done directly from the 01X.
To use the vsti I can not fall below 6-7 ms.
In reading, I can read a thirty tracks and mix of 24 tracks thanks to the physical outputs of the i88x.

I used it for 1 ½ months.
The +: the 2 preamps, strength and finishing, e / s digital SPDIF / ADAT, stability once installed.
The -: boring installation and hardware incompatibility, non-standard dimension (??), no word clock sync to sync with other digital gear and not mLan not ADAT.
Compared with my old sound card SB AWE 64, SB live, GadgetLab wave8, Hoontech DSP 2000 C-port, not to photograph.
Even if the successor of 01x happens, I turned it can not but i 88x

Philippe Hélard's review (This content has been automatically translated from French)

To use the Windows 7 mLan:
-Go to Device Manager,
-Choose the bus controller IEEE 1394
-Update the driver by installing "pilot inherited" (legacy English)
The latest version of mLan install nickel, and your mLAN device will work again!


I hesitated between an EMU 1616m and the Yamaha i88x for my laptop. I chose it for the excellent reputation of its 2 mic preamps, and because it resulted was some time ago.

I use it for stereo sound taken (choir) or 8 tracks max. I put it on a table top with my HP notebook, there's plenty of room! I use a Rode NT4 or NT3 Rode NT1 + or electro-acoustic guitar.

The installation of drivers is not easy and time: y'en full and we must follow the instructions if you must reinstall everything. But once done, it rolls.

No sync problems with a desktop PC. We must choose the PC as a master if you want to use frequencies other than 44.1 MHz.
on the other hand, for my laptop, I chose the master i88X as to make it stable, it limits the sample rate at 44.1 but that's enough.

In my setup laptop with Sonar I use outputs 1 and 2 in master, so I hear the mix in the monitors and headphones. Sonar handles everything: mix, equations, effects, dynamic, virtual synths ... Of the eight tracks that I use Max, here does so with a latency of 5 ms. 16 tracks, no: the laptop is on the street. This is due to the limited transfer rate of 4200 rpm hard drive. On my computer studio (recent config), everything goes easily.

It is a multifunctional audio interface quality for a laptop: I / O MIDI, SPDIF optical or electrical, ADAT, two great mic, 6 balanced line inputs, eight line outputs are also symmetrical inserts on inputs 1 and 2 . The sound quality is excellent.

Did you find this review helpful?yesno
»
Read the 8 user reviews on the Yamaha I-88X »

Yamaha I-88X manuals and other files