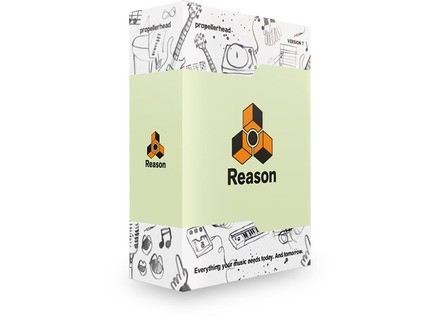 Reason 7, General Sequencer from Reason Studios in the Reason series.

The Age of Reason The new version of Reason, code name 7, has arrived including, as always, a bunch of new features. These new features give the software some sort of completeness — 13 years after its first release? Read more…

Reason Studios Reason 7
5
Reason 7 is the latest installment of the popular music making software that has been developed by the Swedish company known as propellerhead. This sequencing software has gained in popularity over the years thanks to its simulation of a real hardware studio. This latest version incorporates some new features such as the new mixer and EQ, and makes it even easier to create tracks quickly and effectively. In this review I will take a look at some of the features that are new to this version and I will also outline the benefits that it offers to its users.

One of the things that I had to get to grips with when I first started using Reason was the fact that it is completely based within a midi matrix. This means that you cannot drag audio directly into the sequencer and instead need to build it through MIDI data. However, once you get used to this the workflow becomes very quick and the automation is also very easy to carry out, which means you can create complex automations in volume and other effects on instruments that you use.

One of the things I like most about Reason is the fact that it creates a virtual studio on your computer. Reason is a sequencer that uses the concept of creating a virtual hardware studio in which users can create their music. This includes a selection of devices which represent the physical devices that you would find in a modern studio. For instance, you would have a mixer and then have other instruments which plug into this mixer, including devices such as drum machines and synthesizers, as well samplers and effects units. This is all available in the Reason software and can be connected in exactly the same way as you would do in a real studio. You can even flick the instruments round and rewire them in new and interesting ways at the back via CV cables which offer communication between effects.

There are several new features on Reason 7 which I really enjoyed. The first was that of the ability to record audio directly into the sequencer. Before Reason 7 you could only load audio into one of the plug-ins, such as the sampler. What I really liked about this was that you could then use a feature similar to Recycle, which is sold separately in order to chop up the files into individual slices that could then be re-programmed and played across the keyboard.

Another exciting new feature that I found interesting in Reason 7 was that of the new mixer. This allows you the ability to create a wide range of effects when you're mixing down your track, including parallel compression and the ability parametrically EQ each individual channel whilst being able to see the signal in the EQ. As well is this the software also comes with a wide selection of new sounds. Being particularly interested in samples meant that I was able to create a selection of new and interesting tracks with the sounds included.

Reason is a brilliant program for creating electronic music in a wide range of different styles but it does have a few problems. One of the main problems is that it will not accept plug-ins from external software designers. This means that you can only use the devices that are built within Reason and will not be able to use popular plug-ins such as Albino and Massive. Another problem with Reason is that the sound engine is sometimes regarded as being not as good a quality as other sequencers that are available, such as Logic and Ableton. However, Reason can still make music which sounds great. However, The user may need to get used to the sound engine if they have previously used programs such as Logic.

There are no sequencers quite like Reason but other programs such as Logic and Cubase do have a similar sense of design. I found Logic to be easy to use after having practiced on Reason. The Midi matrix is similar and automation functions in a relatively similar way. Plug-ins such as drum machines and synthesizers are also designed in a similar way to those of reason. Logic has the added ability of being able to drag audio files directly into the sequencer window which you can then manipulate. Reasons on the other hand requires you to load a sampler and then manipulate that samples through Midi.

I was excited to upgrade to the new version of Reason after having used every other version from 2.5 onwards. The new version introduces some interesting features which can be incorporated well within your music. The new devices focus on the mixer and the ability to mix down music in new ways. This will appeal to individuals who want to get an interesting mix within their tracks. This is a nice upgrade and will suit fans of the software.
Did you find this review helpful?yesno
»

How is the performance? (if measurable)
Apart from a couple heavy presets, all projects and samples load really fast.

Is the hardware+software configuration stable?
It's the most stable software I have ever used. I have never had a crash using Reason.

How long have you been using the product?
I've been using Reason since version 4, four years ago.


Which feature do you like the most / the least?
+ A superb tool to organize ideas
+ Ideal to create your own sounds (sound design, patch editing, etc...)
+ I love the interface with racks
- The Midi output
+ The SSL-type mixer, which spares me from having to use an external sequencer to make the final mix
+ The EQ's GUI
+ The extent of the sounds included, which are easy to customize
+ The well though-out F8 show/hide tool window
+ The comprehensive and interesting manual

- Clip editing still limited during playback
- Sampling audio editing ought to apply to all audio clips
- There's no way to lower the volume of several tracks at the same time without creating a bus (which is disturbing and a handicap when mixing, especially since this very simple option can be found on any other sequencer)
- No MIDI comping like on Reaper or Studio One
- The media explorer isn't practical, it would be nicer for it to be fully integrated like in studio one.
- No track-by-track midi export. You have to export all tracks.
- Color management
- No new synths or effects, you need to go for the (paid) rack extension.

Did you try any other models before buying this one?
I started out with Acid pro, then tested Fruity Loops, Studio One and Reaper, which I still use

How would you rate its value for money?
I got it for about 250 bucks, upgrading a version I got secondhand. I think it's expensive all the same, but it's unbeatable compared to competing products. Especially with the built-in sound library and instruments.

Based on your experience, would you buy this product again? ...

Yes.
Did you find this review helpful?yesno
»

Reason Studios Reason 7
This software is easy to use but you need some idea of computer music to use it. However, there are lots of forums to help you out and the Reason site is very helpful when you have a problem. It's very easy to install and update.

I've been using it for 4 years and it was the easiest software to learn to make computer music.
UNBEATABLE value for money!!!!!
Did you find this review helpful?yesno
»

Reason Studios Reason 7
5
Very easy installation. The demo version is really nice in this regard, no time limitations, all features are accessible, except the possibility to open other files than those of the demo. A very good way to get acquainted with the software. The proof is that I stopped using cracks.
Activating it on my PC was a bit of a pain, it was buggy the first day (but it worked find the next day and I could use Reason 7 in connected mode all the same).

It comes with everything so you can focus on CREATING! It's awesome!
...and it's incredible effective.

I've been using it for one month.
I used Cubase and some other software programs before (fruity loops among others).
But it's the first time I think the software is well-accomplished and practical.
What I like best is the rack system, which works like in real life. It's logical and easy to use.
It's expensive, but the price is justified by everything that comes with it, and you don't have to spend a dime afterwards.

In terms of use, the block/song system is simply awesome. You can make loops on the fly and nothing is ever out of sync. You can also create "classic" audio tracks in parallel.

Okay, the excitement is long gone. I've been using Reason intensively for 1.5 years.
I was really happy with Reason for writing songs until I found myself limited using it (even if I regarded Reason as THE solution back in 2013).

I gave Ableton Live a try this last weekend and I admit that VSTs provide a versatility and quality that make the EQs and compressors of Reason seem like toys.

It took me some time to explore all advantages and disadvantages of Reason, which is a nice product. But I won't lie, there's a huge difference in terms of quality between the effects provided by Reason and those of Live.

I also think that Reason's rack system looks very sexy at first but, in practice, it's not really handy. It's a real pain to connect the rack to the tracks or mixer channels, even with the shortcuts.

The Rack extensions are also limited, given their proprietary aspect (and they are more or less updated by the developers).

It's true that the complete version of Reason offers lots of REs, but what do you need 250 average-quality reverbs for?

What stroke me most were the EQs. While those of Reason sound rough, a Fablab EQ sounds subtle and delicate.

In short, it's a nice tool for someone starting out, but it's no as practical and simple as I thought.
Did you find this review helpful?yesno
»
Read the 7 user reviews on the Reason Studios Reason 7 »

Published on 10/29/14
Synapse Audio released on the Propellerhead shop the GQ-7 graphic equalizer as a Rack Extension for the Reason DAW.

Reason projects can be pulled on Blend