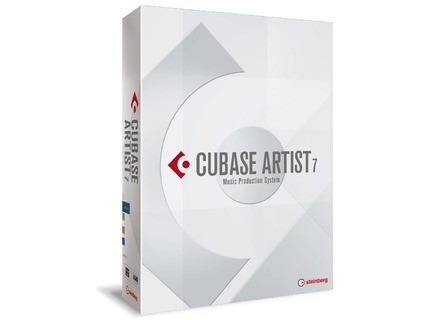 Steinberg Cubase Artist 7
4
# The installation is done it without problems?
Yes. Expect a quarter of an hour to install everything from a DVD player to an SSD, and then perform the update (Cubase and Syncrosoft)
The authorization system is functional and fast.

# Have you experienced any incompatibilities?
Yes, I&#39;m on a 64-bit and 32-bit plugins are some wrong view not supported. This causes the merdouillage VST bridge. I attributed it to just Cubase VSTs. I know it is possible to ensure that it works with jBridge one point digging eventually.
Note that I wanted to install in the first place, all the softwares provided limited demo (and there&#39;s a wheelbarrow full). With me, it caused crashes in rehearsals SYNSOACC.DLL (which is the library that manages permissions Steinberg). To avoid so.

# The general configuration is easy?
Yes, I have Cubase SE4 so no big changes.

# The manual is clear and sufficient?
Yes.
on the other hand, pay your fat pad in PDF format.


# What is the configuration of your computer? (Motherboard / CPU / Ram / Disk / sound card ...)
Intel I5. 12 GB of RAM. SSD. In his map, I have a Edirol FA-66.
Let&#39;s say I went to this version as the one I used previously (Cubase SE4) starting from lollipop with some projects that used a lot of VSTi a bit heavy.
Passing Cubase Artist 7.5, I thought these problems would be solved but no. I had to buy extra RAM (8 GB) except that I was running Windows 7 Home 32-bit (which only supports 4GB of RAM, your payroll fail) so I had to switch to Windows 7 Home Premium and finally everything works perfectly. I think the problem was instead of VSTIi that are very consumer memory.

# The software works he correctly on this configuration?
Perfectly.
I have plans with twenty audio tracks, a dozen VSTi, and between 3 and 5 VST tracks that run without any slowdown.

# What performance? (If measurable)
Difficult to quantify. I work in 32 bit 44.1 kHz and I have no crackling, sizzling or other crap that nightmares are made when computer music.

# This software + hardware is stable?
Absolutely.

# How long do you use?
About a month.

# What is the particular feature you like best and least?
Here to judge, I am using my reference to know Cubase SE4. I know very little other sequencers.

Most:
- New management effects that is so much nicer and better thought out. Can reorder within the chain applied to the track by using the drag and drop: the time saved is simply enormous.
- The new console hyper thoughtful ways. It can even copy and paste settings VST track to another. Too bad we can not just to copy and paste a VST track to another.
- Twelve o&#39;clock functions that are more accessible
- VST and VSTi included in Cubase that are really not bad especially the new version of Halion SE came with.
- HUB Steinberg kind of window startup, subject to have an internet connection, lets learn about the latest software updates (practice) and open a project, create a new one, etc. . Necessary but not necessarily seen anyway.

The least:
- No big overhaul of the overall design. It&#39;s less ugly but it could be happier, everything is hyper ... gray in Cubase.
- The small "e" to display the VST window disappeared and was replaced by a double click. This is not necessarily less convenient but it would have been nice to keep the old means of access.

# Have you tried many other models before buying it?
I was in Cubase LE, Cubase SE4, Cubase 5 (a version "demo" to test but finally I came in SE4), 9 Live! (Too oriented and designed for electronic music for me), Reaper (configurable too empty and VSTi) but I started Cubase so I am, and I am so I rest.

# How would you rate the quality / price?
You can read here or elsewhere that Cubase is too expensive for what it is. Especially compared with some Reaper whose license should hear within 60 €.
This version of Cubase, I bought directly through the website Online shopping Steinberg for 199 € shipping included. Except for that price, I, in addition to the DAW (or STAN), VSTi not bad at all (especially Halion 4 SE is great for a bit of fun and we can draw very good things ) and VST to correct qualifications (including equalizers, compressors and reverb).

# With experience, you do again this choice?
Completely.

New updates for Cubase 7 and Nuendo 6

Steinberg will release an update for Cubase 7.0