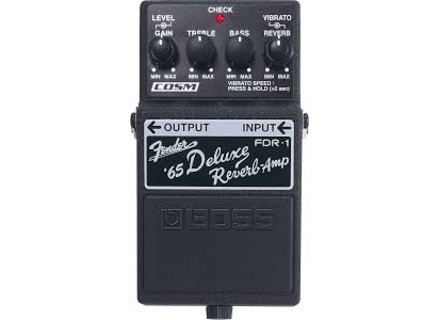 Boss FDR-1 Fender '65 Deluxe Reverb Amp
4
This is another team up pedal between Boss and Fender. this pedal is designed to emulate the sound of a 65 Fender Deluxe Reverb amp. These amps are still popular today and have recently been reissued so needless to say this is a legendary amp.

This pedal has Volume, Gain, Bass, Treble, Reverb, Vibrato Speed and Vibrato Intensity. The origianl amp did not have a gain setting and it had two inputs for the vibrato and the regular channel. This one only has one input but you can have it on vibrato or not. So this is a little more handy and modernized.

The sound of this pedal is going to sound like a pedal. It obviously won't have that push that tubes get in an amp but the voicing is pretty much dead on. The tone of the pedal has a nice vintage vibe to it that is sort of addictive in a low mild rock sort of way.

I like most fender amps or these types of pedals with a Fender Straocatser. I find that I refer the voicing and tone of their amps/pedals and the guitars of a Strat seem to mix perfectly. Perhaps it is because so many musicians use it in this setup that my ears are adapted to this combination or setup. It is a cool pedal and if you don't want to throw down the money for a real amp this is a decent alternative.

At new these pedals come in at around $119, which isn't a bad price for this pedal. This will get you the right voicing and will sound god in front of a Fender tube amp. The price is right and is much cheaper than an original or a reissue of this amp.
Did you find this review helpful?yesno
»

Boss FDR-1 Fender '65 Deluxe Reverb Amp
4
The Boss FDR-1 Fender '65 Deluxe Reverb Amp is a unique pedal that aims to model the Fender amplifier of the same name. I guess that this is a collboration between Boss and Fender, although I'm not sure what the rolls were for each of them in the making of this pedal. The FDR-1 has the standard make up that you'll find on all Boss pedals, with 1/4" connections for input and output and both a 9 volt battery compartment and jack for powering the pedal. It isn't rackable in any way...

The Boss FDR-1 is an easy pedal to use regardless of if you are familiar with the make up of a Fender '65 Deluxe Reverb. Although it does share the main parameters found on this amp, everything is more or less self explanatory on it's own. It's got two, two tiered knobs, with the first one controlling both level and gain, and the second one controlling your vibrato and reverb effects. You can also set the vibrato speed by holding the pedal down for two seconds and using the same parameter. It also has treble and bass tone knobs. I haven't seen the manual for the FDR-1, so I can't speak to it's make up.

While I can't say that the Boss FDR-1 Fender '65 Deluxe Reverb Amp is an exact emulation of the classic Fender amp, it's about as good of an emulator as you're going to find in pedal form. Don't expect the pedal to transform your solid state amplifier into a warm tube amp, but with the FDR-1 you do get some control and effects that are usually found on Fender amps. Setting the gain/level knobs up will definitely give you some nice sounding overdrive, and both the reverb and vibrato effects are very realistic and true to the original Fender Deluxe Reverb sound. You're certainly not getting too much control over the effects, but it does stay true to the original amp in this fashion...

I'm definitely a fan of the Boss FDR-1 Fender '65 Deluxe Reverb Amp, but I don't own one myself since I already have a Fender amp. So obviously, if you already have a Fender amp, the FDR-1 isn't really necessary for you. If you're looking for either a reverb or vibrato pedal to use primarily for either effect, I'd recommend looking elsewhere, but if you just want a taste of each, this is a great pedal to have around. The price is maybe a tad much, but the build is as sturdy as any pedal, being that it is a Boss. Get the best of both worlds with the Boss FDR-1, with a classic Fender sound in a modern Boss build!
Did you find this review helpful?yesno
»

Boss FDR-1 Fender '65 Deluxe Reverb Amp
4
Boss's FDR-1 is an amp modeler with reverb and vibrato, based on the Fender 1965-era Deluxe Reverb, which is a coveted tube amp known for its distinctive tone. Apparently BOSS worked with Fender to try and nail the sound of the Deluxe Reverb, which increased my expectations for it.
The FDR-1 is packaged in the standard BOSS stompbox casing, which are always pretty sturdy. It would blend in like a regular stompbox on your pedalboard. It has your standard 1/4&quot; input and output, and ac adapter input.

The controls on the FDR-1 are very similar to the actual amp it seeks to emulate. It has Level, Gain, Treble, Bass, Vibrato and Reverb. Other than to full understand how to tweak the vibrato effect, its very self-explanatory and I didn't even need the manual.

As far as the amp model, it is fairly good. I have played modelers that attempted a Deluxe Reverb sound like Line6 and Digitech. This pedal comes a LOT closer to replicating actual Fender sound than any other modeler I've heard. Its got sparkle, spank, and even grit that get pretty darn close to the real thing, without actually BEING the real thing.

As far as reverb, its good. Probably as good or better as the reverb on many amps people will plug this into. Sadly its not nearly as good as ACTUAL Deluxe Reverb reverb. It starts getting cheesy sounding in the upper range, so getting super drippy reverb like you can from the actual amp is not a reasonable expoectation to have. I still can't fault it much though.

The vibrato is great, very usable, and gives a fairly wide range of tweaking possible. I wasn't disapointed.

I played this stompbox by putting it in front of my low end tube amp; an Epiphone Valve Special. It added a new dimension to the already decent clean sound, so I can't imagine the miracles this pedal could work for a lackluster Solid State amp's clean channel. I was also able to use it to push my tube amp into a bit more grit and sustain. They interacted nicely.

What I like most about this is that it seems like they worked very hard to replicate the Fender sound. I can only fault them for the limitations of modeling technology, not for effort. I'm not sure how enthusiastically I can reccomend this pedal as expensive as it is (150 or so), but it is a fairly cheap option compared to buying an actual Fender amp if you only want this sound periodically. The most realistic I can see people getting out of this product is to dress up the clean sound they get from their pre-existing setup. Face it, even if you had a Deluxe Reverb, you wouldnt be happy with the overdrive if you're like me, so its easier to pair this up with your amp of choice. Or it can bring new life to your super cheap tube amp, like the Valve Junior that so many people love for its simplicity. This pedal would make up for the lack of reverb that many lower end tube amps suffer from.
Did you find this review helpful?yesno
»

-Livingroom-'s review (This content has been automatically translated from French)" Strange indeed ..."

Boss FDR-1 Fender '65 Deluxe Reverb Amp
4
Pedal boss who promises to emulate a fender deluxe reverb 65 'thanks to COSM technology. A robust metal shell (very pretty, it looks like Tolex), a 9v power supply input, a jack in, jack out and roll youth!

a two-band EQ, a reverb, gain, volume, and it is gone, it is inherently less complicated than amp, but the buttons are smaller, and if it moves even just a little is the galley, while the sound has changed.

In the loop of an amp, it's a small effect. Front, if we go back another preamp, the result is uneven. In a fender hot rod, it can go on a transistor is screaming fast (lamps do much in his fender, besides their transistors models are damn zero).

After, as all these effects, if a pedal 100 balls was the same as amp 2000 we would stop breaking your back to hang!

I had bought for the reverb, which is not bad, but worse than a pedal dedicated to this purpose. In short, a seller has confused me, but all that to say that cete pedal has many potential uses, but none are transcendent.

I used 3 years, until I buy a real reverb. I dirias that is good for a home studio or playing at home, but for the rest it's complicated. It will make a good preamp for the horse, if you ever want to not hang a big combo, if the room has a baffle and any head with an effects loop, voila. It is expensive for what it is I think.

Did you find this review helpful?yesno
»
Read the 12 user reviews on the Boss FDR-1 Fender '65 Deluxe Reverb Amp »