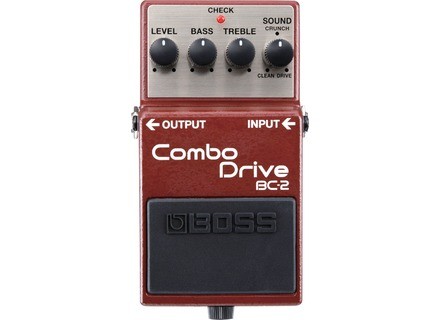 Boss BC-2 Combo Drive
5
Boss is known for making pedals that can withstand a nuclear bombing or a similar yet equal test of endurance; live gigging.

I first heard about the BC-2 Combo Drive a few weeks ago. To me what set it apart from most pedals is the Sound Knob which turns this pedal into a clean boost, light and crunchy overdrive to a mean and loud roaring lion of a distortion tone. Because this is a full accessible knob and not just a rotary knob you can blend all of these sounds. Brand new the pedal costs $119

The sound knob allows me to use this pedal for many applications. I can use it as a clean boost for my acoustic guitar solo work, to even out a single coil sound to equal a humbucker if I'm switching guitars live or I can just use this as I would any old overdrive pedal.

It would be cool to see if there are any mods available that can tame the high end as I never need to go past 12 o'clock with this pedal, but that said I generally like a bassier tone anyway.

Rock solid quality like all Boss pedals. The rubber coated switch, the metal pots and aluminum case all the around this pedal is ready for anything!

Stnadard Boss 9 volt power supply is what powers this if you aren't using batteries. I personally like my Godlyke power supply which works just as well.

A great all around pedal to have. Really sounds great in front of the right tube amp. The sound knob is what sets it apart from the rest of the pedals out there in pedal land.

celtwyn's review (This content has been automatically translated from French)"I love it!"

Boss BC-2 Combo Drive
5
* Note *: I thought I had the scoop of the notice, but I made almost two days to grill .. time to do testing * LOL

Okay so it&#39;s a Boss, Boss usual format, with four buttons - level - Bass - Treble - Sound (gain)
The peculiarity of this pedal is having a fine adjustment for the bass and treble, unlike the usual "tone", which is more interesting.
This pedal is a need to consider more than one amp overdrive pedal or distortion, in that it is made to simulate an AC30, so the goal is just to turn your amp an AC30 ... if you do not have the money to buy an AC30 (or no room to put it)

use is very simple, you can still read the user manual (it still serves) are dispatched to understand how the different sections of the button "Sound" between "clean" (from 7am to 9am), the "crunch "(10 am to 2 am) and" drive "(from 3 to 5 hours), because it is a division into three borders.
That&#39;s good compared to the design of the user guide, of course if you ask me "what is between 9 and 10am?" ben ... the transition from one mode to another * LOL
Already at 9am we begin to understand that we are entering a slight overdrive and it is better to lower the level (volume) of the pedal because the volume is rising quickly.

As did my predecessor on this opinion, it is better to explain how it is setup, so for me it&#39;s much easier (than him). I am testing by plugging directly into my guitar (Rickenbacker) in, and I plugged the pedal to the amp (like a normal pedal what).
interest for me was to see if I went to have a new amp. I use a 20w Fender Mustang, with a bunch of presets amp simulations and effects that I do not like really, but sometimes it makes service.
So all my presets are modified to be in its clean, which means that I have all the effects turned on and set the gains to a minimum. I generally use effects pedals connected to the amp that I can select and set as I want.
I would love to have a kind AC30 amp, tube with a warmer sound, but ... it&#39;s not for now .. Hence the idea to test this pedal that made me the eye for a while, but desperate to find any opportunity I decided to buy a new one, after seeing some videos that I have finally convinced.
She thus serves to change the sound of my amp, and it works very well. I can not make a true comparison with AC30, but what I mean I really like. I traveled all the different presets my amp with the pedal constantly on-off to compare, and I thought at times "hooo well ... it&#39;s very nice that sound ..." and looking pedal I realized it was on ... and as soon as I put out it was much less friendly, less hot, more acidic ... anything less!
I slowly mounted the overdrive. It goes further still, beyond the 12 we arrive at the disto well ... disto ... for those who like the same kind of thing or not when you touch the strings it makes noise ... In the opinion of my predecessor on this page, it would be inappropriate to metalheads ... ben I say we should try because it&#39;s hard anyway! Besides, I do not think the gain is too wide an AC30 ... I think Boss to gain a little pushed for greater versatility, but I think it&#39;s too trashy.
I personally not exceed the gain on my 11:30 (the hour hand between 11am and 12pm for those who still have analog watches) beyond I find it very beautiful, in any case this is not the sounds I&#39;m looking for
Then I tried with all my pedals between my guitar and BC-2 to see if it responded well. I leave the BC-2 in clean and I switched my overdrive ... nothing to do in safe mode BC-2, it really is warmer. My Blues Driver (Boss BD-2) in neck pickup on the guitar sounds so beautifully with the BC-2. And with the T-rex Tonebug overdrive was really a beautiful vintage sound. Then you can also add gain on the BC-2, but it&#39;s a matter of taste, must be determined, I do not like when it saturates.

For me it is an awsome pedal! I not regret my purchase, when I play it all the time on, I have a new amp whose sound I like much more than the original. The advantage is that I can always return to my original amp just by turning off the pedal, I do not need to unplug my cable to connect to another amp.
I repeat (at the risk of drunk) is a pedal to be regarded as a amp simulation and not just an overdrive (my home is the last link in my pedalboard just before the amp), but ... can also be used as an overdrive distortion-base, it is clear that things change at once the sound, it allows different combinations.
I did not notice any particular breath, or else when the drive reaches 12 ... but I do not know if it can be seen as the breath, I think that&#39;s the style to blow hard distortion sound without anyone touching anything ... I do not know actually, I hate this kind of distortion or I feel that I control nothing. Clean and overdrive mode it works nickel-crunch breathless.
For value for money, I&#39;m still terrified by the price of nine, I always find that manufacturers exaggerate, I usually buy used ... but then I receive a grant (this is why friends) so it cost me only 44 euros instead of the usual 99 euros, then, yes I can say it&#39;s unbeatable! ! * LOL
but it is clear, I have tried it before buying it on my personal stuff (not in stores with stuff I have not), I think I&#39;ll live off my piggy bank to get one ! it changed my life so much (the sound) to have it, if I had to keep only one of my pedals, it would be this one without hesitation!
Here is my personal opinion, after that depends on the sound you want, the model of guitar and amp you have, but if you like me a Fender Mustang, I promise you that you metamorphose. it adds a preset amp simulator "Vox AC30" which is unfortunately not original, and it&#39;s great!

View all 6 videos of Boss BC-2 Combo Drive »

Boss BC-2 Combo Drive manuals and other files