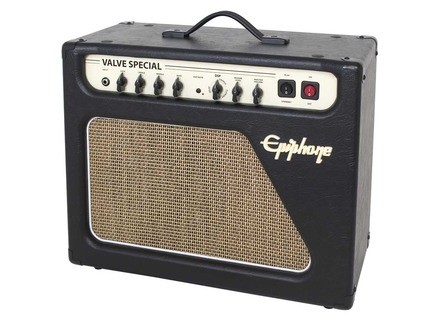 Epiphone Valve Special
4
The Epiphone Valve Special is a guitar combo amp coming from a rare place, as Epiphone is known for their guitars and not for making amps. It's a small amp, although bigger than what it's wattage would imply as it's only got 5 watts and a single 10" speaker. It's a valve tube amp, but also has built in digital DSP effects including reverb. It has a 1/4" input in the front and the back has a 1/4" speaker output, which is connected to the internal speaker, as well as for a foot switch and for a separate external speaker.

It shouldn't be hard to get used to using the Epiphone Valve Special, as nothing here is close to rocket science. The front panel features parameters for gain, treble, middle, and bass, as well as control for the DSP effects. First, there's a button to mute the DSP section, followed by a knob to choose between the different effects, which including reverb, delay, chorus, and a flanger. It then has a reverb level knob and an overall master volume control. I don't think users will find that they need a manual.

The sound of the Epiphone Valve Special is decent but nothing special in my opinion. Sure, it's a tube amp but it doesn't have the same girth and warmth that you get with some other tube amps out there. I've used the amp both with acoustic and electric and it sounds okay for either of them. The built in effects are also decent at best, although the reverb is better than the others and they are definitely nice to have. The amp will do a fine job for smaller venues or recording, but it still lacks a certain quality in it's sound that you'll get with more full on tube amps.

For the price, you're not going to find too many tube amps like the Epiphone Valve Special. There is always give and take however, as I don't think that this stacks up to other tube amps that I've used. It still will beat some solid state amplifiers if you're looking for that tube sound, but it's not up to par with something like a Fender Deville or Dexluxe even. It's super cheap so you can't really complain, but Epiphone is definitely best at making guitars!

Epiphone Valve Special
4
The Epiphone Valve Special is a true class A tube combo. It delivers 5 watts of single-ended power through an epiphone 10&quot; speaker. It has a single input, and an 8 ohm speaker output (more on that later). An effects loop would have been nice but is nonexistant in this price range so I don't hold it against them.
This lineup of amps and heads from Epiphone is most likely their answer to the Fender Junior amps. Having high quality tube sound in a simple package thats affordable appeals to everyone from a sound-savvy beginner, players that frequent small venues and are looking for an uncomplicated setup, to studio use since their low wattage makes them easy to crank up. The whole Epiphone Valve lineup is incredibly affordable.

The Valve Special combo is a step up from the Valve Junior because unlike the VJ it offers seperate Gain and Master Volume controls (the VJ has a single level) and a moderately usable EQ, along with reverb and onboard effects. It also has a standby switch, which the lesser models do not have, so thats a bonus.

This amp is a breeze to plug into and play with minimal fuss. To be honest, I never looked at the manual. I easily got a good sound out of it with every guitar I own.

This amp is not as versatile as many would like it to be, since it is a single channel amp. With that being said, I still get a wide variety of sounds from it, but keep in mind it will not give you a metal sound, or even a high gain sound without outboard effects/stompboxes. What it will give you is a fairly British sounding bark at high gains, moderate sustain, but still with clarity on the indivudual notes. More of a slightly crunchy overdrive that never enters &quot;distortion&quot; territory.
My favorite strategy is plugging my Ibanez Ghostrider (Les Paul style) guitar in, maxing the Master Volume, and playing with the gain to get a perfect balance between chime and dirt. One tip for you if you have Gibson style pickups that clean up as you lower the volume (like mine do) is to use more gain than you want, and use the controls on your guitar to clean it up. It yields a creamy clean sound that is to die for if you are used to sterile solid state amplifiers. Sometimes I drive the amp with a TS9 Tube Screamer and get some great lead sounds that satisfy my need for Santana-like sustain.
The reverb on this amp is very good, better than that of any of the other tube amps in this price range like the Fender Junior amps. Its fairly full up to 70% or so then gets flabby after that, so don't expect true Fender tube reverb or drippy surf style reverb. It works perfectly for me, as I like a good amount of reverb on my clean sounds.
The built in effects on the Special suck. It would have been better to just leave them off, or just give a decent chorus effect in place of UNusable multi-FX. The delay is too drastic and will turn off most players with a tasteful ear, and the flange is absolutely, terribly cheesy. I do not use them at all.
One more cool feature is that rather than hardwire the speaker to the amp, Epiphone purposely used 1/4&quot; connections that can be dissconnected to use the 8 ohm output to drive a seperate cab in place of the stock 10&quot;. The stock speaker is not bad, but I did get some good results by driving the speakers of a 212 combo I had laying around. Its cool to have the option of driving different configurations, so its harder to outgrow this amp.

I've been paying this amp for nearly a year. Most of all, I like the simplicity, and the creamy sustainy clean to mildly overdriven sounds sounds. Its versatile enough to gig out small venues w/minimal outboard effects. FYI, I did swap in some JJ's Eurotubes and it made this amp sing like it does for me. I strongly reccomend doing this and not settling for the stock setup.
I have tried the Epi Valve Junior, the low end Crate tube amps, and the Fender Blues Junior and Pro, and I think this amp wins when the chips are down. The reverb is better, is a bit more versatile in terms of the controls and what tones you can dial in, and is cheap. I picked mine up for under 200 on ebay including shipping. Its a great value for the price even if you bought it new.
I would buy it all over again if I had to.

rycouderc's review (This content has been automatically translated from French)

Rglages super simple, the sound reaches the end of knob and penalizes are clear against it excels by its saturation with natural crunchy, a bit like a VOX AC30, 5 watts then take a lot of momentum in privilgiant the mdiums, the quality of the body (thickness, enclosure) brings a lot of realism and scale (it's hard to believe that only 5 watts so the bowl), sounds great with blues Start jazz but also with a semi-hollow, more than a gadget that is ideal
to work at home or in studio

Cete amp I use a Start and a Vox pedal brit power, the sound is the sound of trs blousy rock "softphone," as I use it with half a body ibanez (af75s) for jazz

J'utlise this amp for 3 months, the ratio quality price is excellent (no concurrency in this space except the blue cube with no reverb ibanez ....)

Phil-Loup's review (This content has been automatically translated from French)

Yeah, that's the problem though, on this amp, turn buttons, otherwise well nase ...
The manual is not used much if you already have an amp lamp on hand.
The DSP is not nothing, especially since it causes a espce blowing / whistling trsdsagrable, the delay is just drinking the chorus and flanger are of quality rather mdiocre. .. Epiphone sir but thought to put a button to transfer the thing is, the right ide of this amp ...

When I reu this amp, I have my branch Strato I allowed to warm one minute, I put all the buttons noon mut DSP, and l. .. I told myself, could I be deceived ..? I dare not even talk about her like so much to do ... nothing!
... Here on this amp, you really play with all the buttons if you want to have sound ... APRS refining rglages actually, we get the typical sound lights, lots of harmonics in the sound clear, natural reverb, and adding gain, a crunch almost too fast ... but my Strato it quite dynamic microphones, so I ask and I attack with my bte the Tl .. and your exact becomes downright nice, only one remains in a record-Jazzy-Bluesy Rocky but definitely not metal ... I try to go with my Gretsch ... Woof ..! P..! The timber was sent! Voil-ty that would take almost j'me for Brian Setzer! S j'exagre good, but have plugged my APRS Ibanez AF75, I confirm that this little amp is made to play with a half-body ... I try an acoustic, after two minutes I can see that the two are not made for each other ... And with my old Westone "Concorde" with big humbuckers, I confirm that the microphones do gure pchus too ... Yet on the Gretsch ... but this guitar is a case from ...

Unless you use a rack of effects, this amp lacks versatility, but that's not what I asked. I had the opportunity to test the competition in the same register, Ibanez, Fender, Peavey (very good) ...
They are worth all, I fell for the Epiphone for its looks and its price (I got 175 Euros)
If I had not dja everything you need for scne, I never made the purchase, I wanted a small all-tube in order to operate the home, MODEL is suited for this purpose, it is not so small a, but do not use it on a scne without the transplant and getting in return, while at a bar, not too big ...

Did you find this review helpful?yesno
»
Read the 6 user reviews on the Epiphone Valve Special »