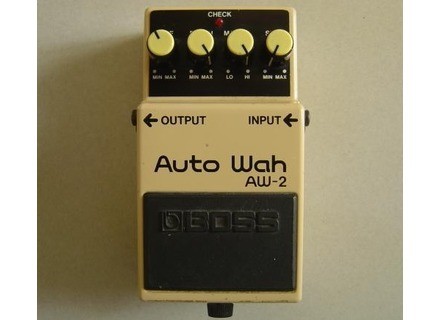 Boss AW-2 Auto Wah
3
55 bucks at a pawn shop in NY. I wanted to get the kind of auto-wah you hear on terrapin station (grateful dead).

Once you fool around enough - and e-mail people all over the world for settings because you don't have a manual - it's not bad.


Changes the tone of my guitar. Hard to figure out the settings. Eats batteries.

Excellent construction and quality. I got a good deal but its not quite what I want.

You want it? e-mail me - 60 bucks. Plus shipping. Actually as long as I have it and don't try the soundtank I will use it from time to time but it won't always be a part of my setup.

Boss AW-2 Auto Wah
4
This is one of the more versatile autowahs that Boss has released. In the past, they had the TW1, along with a few other pedals. Those worked nicely, but for people who were looking for a bit more versatility, this auto wah was made. The pedal isn't that much different. It has a rate, depth, manual and sensitivity knob on it, along with the standard FET bypass and normal input/output connections.

Boss pedals are notoriously famous for being able to stand pretty much any kind of abuse you can throw at them. The housings are built like tanks, and they can be thrown off of buildings without any issues. They're truly some of the most reliable pedals out there, and I continue to have pedals older than I am in my rig without any issues at all. The pedal itself is fairly easy to setup, although some of the names are a bit ambiguous. Once you start turning the knobs, you can tell what each one does, but if you open up the manual, Boss describes what every knob does in detail, along with giving you some example settings to help get you started real quick.

The sound is pretty good, but it's your basic auto wah. I never really found a big use for a simple auto wah by itself except for a few funk lines or something. If I wanted that kind of surging sound to constantly occur, I'd rather break out a flanger and make it a bit more apparent than break out the auto wah. I can also do a lot of this with my normal wah, so it's not exactly something that needed to be on my board. The wah effect itself is decent, but there are a few Boss pedals that I think sound a bit better than this one. It's not bad, but I just didn't really find it to be quite as good as some of the real old Boss auto wahs.

If you're looking for a decent funk pedal to throw on your board, this could work out for you. However, I tend to just rely on the normal wah for whatever I need. It seems to suit me a lot better. That said, you can score these on eBay pretty cheap, and if you don't like it, you can always resell it. Your only choice is to buy used anyway.
Did you find this review helpful?yesno
»

Boss AW-2 Auto Wah
3
This unit from Boss had some decent features but overall didn't pan out to be that great. they only made it for a short period of time and the idea of it caught on to some people, but I think most people really want the action of a real wah wah pedal.

The RATE knob controls the amount of modulation. Turn off modulation by turning the RATE knob to min. The DEPTH knob sets the range of the modulation effect. In the min position, modulation will be off and the wah intensity will be controlled by the picking strength. The MANUAL knob adjusts the frequency where the modulation Wah effect kicks in and the SENS control sets the sensitivity of the wah. High sensitivity means that a wah effect is produced with soft playing.

The tone of the pedal was sort of difficult to fine tune as to which maybe people were turned off to this pedal. The tone can shift and shift without explanation and t o which people would get frustrated as to why the pedal didn't stay balanced with the control it was left on.

You can use this with any guitar or amp. The use of other gear isn't important but rather the inconsistency of how the pedal sounded when engaged. When you engaged the pedal it has a wah variation but there was a trick to getting it to smooth out in the rhythm that that you are playing.

These pedals have been discontined for some time now. I think that last ones on the market were around 1999. They have now been replaced with the Boss AW-3 as most pedals from Boss just simply go up a number.

I would recommend the Zvex auto wah or the Boss Aw-3 before purchasing this pedal. You may get quickly irritated with how this thing reacts when engaged.
Did you find this review helpful?yesno
»

Bassistuta's review (This content has been automatically translated from French)

Finding its not asking too much effort but be square against it by APRS is something else.
Otherwise dcalage with the loop comes quickly, even one with the drum so imagine derrire and 2 six-string players of both sides.
This is an auto-wah bte all, nothing more. So those who love the filters would hate.

Analog sound. Gnrait mine a bit of breath but nothing serious.
on the other hand, triggers, but without playing, the loop clearly audible on the amp in some fiddle so I am not a big note.
The needle is avoided rglage too nasal. As against the rglages too serious will not be the friends of your slaps = increasing.
You can see that for personal rglages well, there's a little work and discipline to play "with."

I sold 5 months APRS have purchased since I purchased the FT-2 BOSS of much better quality.
The auto-wah effect did not suit me.
For it is not against CHRE (~ 35/40 euros OCCAZ '). It's not ruin a try.

Did you find this review helpful?yesno
»
Read the 7 user reviews on the Boss AW-2 Auto Wah »