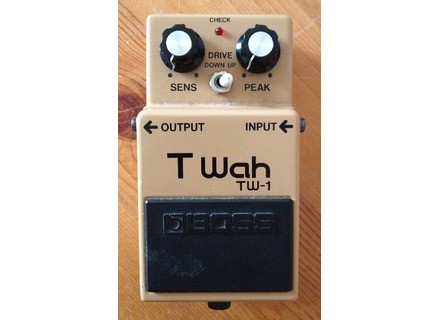 Boss TW-1 Touch Wah / T Wah
4
This Boss pedal is probably one of the more popular Boss Auto Wahs thanks to it being one of the first auto wahs that Boss ever made. On top of that, there are two different versions of this, so it's worth noting whichever one you have. The earlier ones just had two knobs. The later ones had the switch added in the middle for a bit more versatility. You have a sensitivity knob and a peak knob. On the later ones, the switch in the middle controls the overall modulation.

The pedal is laid out very easily. You can tell what everything does just by looking at it. The earlier ones are even easier to use, but the later ones aren't hard to use, either. We're only talking two knobs, after all. The max would be two knobs with a switch. Just move them around, and you'll figure out how they work. I have never read the manual for this, and in fact, I've never seen the manual for these because they're so old. I'm sure you can get it on Boss's website, but I never bothered to check. The pedal can take some ridiculous abuse, and it's pretty insane how tough these pedals really are. I'd throw it in a true bypass loop, but that's just me.

The sound is great, despite it being so old. It has a very vintage, old school auto wah tone that is a lot more organic and 3d sounding than the later auto wahs out there. That said, it can't do as much. You're pretty much locked into the basic effect that Boss gave you. The extra switch on the later ones helped give you some more versatility, and I actually recommend finding those if you can. They can deliver great funk sounds, and it can work quite well in fusion, too. Aside from that, its usages are kinda limited as not much other music uses this kind of effect.

If you can find one of these at a good price, I recommend getting it. They sound pretty good, and they can deliver some of that old school, vintage style tone that the newer ones can't seem to deliver. That said, it't not exactly an effect you're going to rush out to have on your board, so I'm not sure how necessary this is for everyone.

Boss TW-1 Touch Wah / T Wah
5
This wah pedal like a game that depends on the musician's, mine in 1983, Japan is the boss, solid and reliable.
Format boss traditional home, a footswitch, a switch to select the curve of the effect of an adjustable knob for sensitivity and one of the depth of the effect.

Trs easy to adjust, we adjust the curve and the sensitivity and finally the extent of the damage

Trs are is good as a guitar's bass, very nice indeed!

I have been using is the interret this pedal is its sound fawn "Sir Psycho Sexy" Red Hot, fun and usable for bass solo, especially coupled to a distortion!

Piedrot's review (This content has been automatically translated from French)" Good pedal, which is doing its job"

Few adjustments, but they are very effective "sensitivity" (for the effect more or less responsive to pick attack), "peak" (like the Q factor on many pedal is the peak in the treble, more or less pronounced) and a mini switch "drive", practical and quite often present on the automatic wah, it can reverse the attack ("haw" instead of wah, like when you go back with a real wah, very nice ...)

It is like a lot of wah automatic, meaning that if you push the settings a bit too quickly becomes eardrum-piercing. We must adjust it with discernment.
It can be used with other instruments as guitar, bass in particular is very effective.
Then, you really have a use for this kind of effect because, after the "fun" side and the first experiments, we get tired quickly if it is not a part of your sound or your game guitar. I've had several and it has not escaped the rule and I ended up selling it.
Yet I hesitated to get rid of it because it makes things very nice, especially for funky rhythms Speedee (we hear during prosecution jalopy in the series from the 70s/80s like Starsky and Hutch), that it sounds good and has very specific attacks.
Do not count cons by using it as a real wah pedal. It's easier to use but it is much less versatile.

Pedal very solid, I've kept twenty years (okay, not use it much) and it has always worked perfectly whenever I needed it. It is the strength of Boss cases, it can withstand almost anything.
It is no longer manufactured for many years.
I find it rather overvalued market opportunity (about 100 euros - or more - most of the time, do not push!), But the effect is "vintage" which touches on just about any stuff, even a crappy, as long as it has over ten years and your dad had one when he played with his buddies from high school. A shit twenty years ago, it's always a crap today, but the oldest and most dilapidated!
That said, this is a good pedal that does its job, but I would not advise more than 60/70 euros. If you consider the price of a micro Q-Tron (Electro Harmonix), used a greater price difference is not justified because, yes, the Boss is rarer, but that's nearly the same sound quality, with possibilities of different settings, of course.