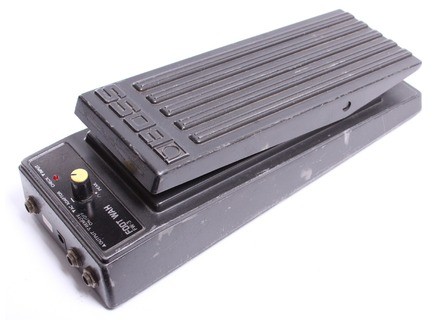 Boss FW-3 Foot Wah
4
The good is the sound of rustic design which take over the tank assaults that the effect of good guitar but it's been over 15 years she follows me, I confess to having a little sulk .. . I've fallen over there is little I needed this and there .. surprise ... she walks impec no noise (a little bit of WB40 and presto!)

The plus is the curve adjustment of attack that is effective, but I confess I do not serve me any at noon and before Guinguan.

It is the quality that is surprising, though it tends to saturate the sound when enclanchée and remains in the down position (me makes me an overdrive for solos and then a small boost after we send the pi bousin stirring and of the cocottes happens it's too good).

I did well not to me separately, it has a place in any particulate my pedalboard.

Boss FW-3 Foot Wah
4
It's a fairly classic wah wah. You can adjust the response of the wah (aggressive freshwater).
Archi-standard connectors.

It is easy to use, no need to notice. The thing confusing and a bit negative is that it does not fire as a push button Cry Baby. There must be almost up above (with the usual forgetting to detail).

7 because of the mode of engagement.

I find the sound very good, it is less aggressive and typed a CryBaby is as beautiful as an object, the secret of the Boss Wah Wah ugly. In practice the intensity setting of the curve of the effect is a good idea. It can be quite soft and flexible (eg on a Rhodes or bass).
It's solid and reliable, I have for 15 years, she has seen it all, she did not flinch.

It's an interesting pedal, although I think for a "real guitar" a Dunlop or Vox will be a better choice. Me, I walk on all my instruments, so I appreciate its versatility.
Did you find this review helpful?yesno
»

Skorps's review (This content has been automatically translated from French)

Boss FW-3 Foot Wah
4
It's a big wah very robust very simplistic, one input, one output, an auxiliary switch, it has a knob waving to the curve of the wah filter, which allows for a very discreet wah or a large WAH very sensitive, there is necessarily the curve which you need. It also has a switch under the pedal to activate and deactivate the effect.
We can connect either a 9V adapter or a 9V battery.

Operation is very simple because it's a wah to a knob we branch, you turn and go, simply turn the knob to select the desired curve and within minutes you have tamed the beast.

The effect is very successful, more like a cry baby that vox847 (the wah does not undergo distortion), I used an electric guitar stratocaster type, I have no loss of sound, a truebypass power!
It goes well avecd other pedal, or amp with overdrive.

There remains a slight distortion if we remain in effect very low, with a huge curve, and attacking the strings very hard, but it is not dirty, and you really have to want to get there.

I use it for a few days but it's an opportunity that have already experienced, and it still works perfectly, as what it's solid. the other model type of hellbabe Berhinger or daphon does not happen at the ankle, I carried my choice on the boss because, FW-3 level value for money is great.

I would not hesitate to use it on stage and I intend to keep it very long, the only one able to change my pedal would vox847

The only fault is that it may have to be ugly, and the fact that we should focus a bit to activate the effect (although, just put a little leg forward and it does)

Could not be more simple, you plug it and play.

A knob adjusts the magnitude of the effect wha-wha.

No manual. Only an ignoramus in need.

This wha hanging out with me for quite some tps before I decide to use it. I compared it with a crybaby and frankly the boss not be ashamed to face her. Wha a very good effect, with beautiful clear mid and treble but not garish.

I do not think it colors the sound when it is off (almost a true bypass!)

The boss has a point in the race because most of the pedal (from low to high and vice versa) is less than the short crybaby. For big feet like me, it's a plus!

I thought the crybaby buy for the sound, but after having tried it, I realized that I had already!

Did you find this review helpful?yesno
»
Read the 5 user reviews on the Boss FW-3 Foot Wah »