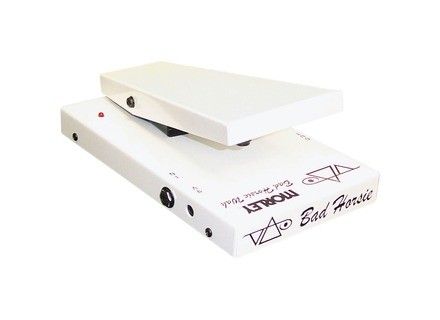 
1 user review
Find it in the classifieds starting at $30 Avg used price: $52

Morley 10th Anniversary Bad Horsie Wah
5
I purchased this pedal along with my fender deville 2x12 at Guitar Center in Dallas, TX. I had been wanting to get into the wah pedal stuff, but knew I would hate a wah pedal you had to click on and off. Those of you who know that other brands of wah pedals you have to rock the pedal all the way forward and then click on, then same to turn off. To me this is redundant and you would think someone would build a better mousetrap - enter Morley and Steve Vai.

I love everything about this unit, especially the fact that it is dummy proof. Step on and wah away, step off is bypass (no wah). This thing is reliable, its got the tone when you want it, no problems. And sturdy as a brick outhouse.

The only thing I don't like is that I wish it were the Bad Horsie II. I like the idea of tweaking the tone to my taste. Don't get me wrong, this pedal kicks the crap outta those other guys pedals.

Like I said, I would definitely buy again, but would prefer the II, just for that little dial (only difference in two). I love it and wouldn't get rid of it!!!