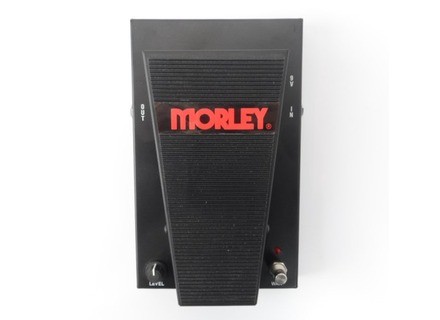 Morley Pro Series Wah Volume
3
Wah / volume completely mono, an inlet, an outlet, a switch to activate the wah (wah volume effect if not triggered).
A knob to adjust the ranks of the wah.


A notice so marred by malfunctions. Otherwise, your only taste be the judge!
Did you find this review helpful?yesno
»

Morley Pro Series Wah Volume
4
As the name implies 2 whawha function / volume
Not complicated to use ... A Input jack / jack Outpout ...
A switch to trigger the ITP .... whawha red LED lights on the same switch ... when you cut the Wha Wha it becomes a volume pedal ... a knob to adjust the amplitude BEYOND Wha
It's real tough iron is very heavy very stable ... The foot is covered with non-slip Koutchouc ... No pb side ergonomics ... We just more or less tighten the joint between the pedal .... avé a small Teflon ring to have a history + pedal - hard ...

The config is very simple .... The knob adjusts the amplitude of the Wha .... It's easy

The wha wha Morley is therefore with a very specific sound characteristics ... No cons with added noise when the pedal is in bypass (in position so volume)
The volume pedal is not one of my dreams malfgré technical features that seem interresting (optical system instead of a knob on wheel) No adjustment of amplitude noise :-( So we go flying off the position to position donf ..... Theoretically the system reacts differently depending on the volume of the rate of depression of the pedal if you gently lowers the volume bcp rise more slowly than if you pushed the pedal suddenly .. Here I say blah !!

I use it for 1 year instead of other volume pedals (Proell) ...
The advantage is that it is very tough ... I use less and less the volume pedal as hard to control ...
Wha just works very well and quietly
I paid 60 euros OCCAZ comes home

Morley Pro Series Wah Volume
3
What about ... dj say everything is down, wha is a switch that volume, an input and output jacks, very tough for the dtruire must go (mine even survived a tidal the pool of beer)

It's simple, you cables, and lean on the switch to select either the wha, or volume, the amplitude is large enough what is right (not like the cry baby), which can be more precise .

So l. ..... ben the volume is not one wonders what top serves (it seems to be gadget).
When wha efficase, clean, precise, not screaming if the amp is rgl, a morley wha in all its glory.
But the real problem of the pedals is that they used in volume dnature sound, there is no true bypass, and when some pedals without true bypass happens to have a very respectable sound even the character, that it messes up your CARREMENT beep (assuming you are good cables and it is known what is the sound of the guitar plugs directly into the amp) attack and loss of Grain microphones, but damage seen the price for a beginners is broadly acceptable but the cry baby still gives more personality.

was 2 years that I'm 6 months and I use it more since I have good cables and I changed the pickups of my guitar. A really bought that if it gets off the but I always say everything is a matter of taste level.
If you have gold coins, take the high-end wha like bad horsie, 535Q, RMC, ETC .......
Otherwise I recommend the RMC inlet end or simple crybaby or the vox.

heLeN's review (This content has been automatically translated from French)

Morley Pro Series Wah Volume
5
Hey you said it all. It's a Wah Volume +, it is effectively indestructible, having said it (mine anyway) has a tendency fcheuse grind. Work for low volume may be clenching.

I use it for two years. I like the large amplitude that allows it to use out of a "trivial".
The volume is a function bndiction for concerts, soon to torment his strings to avoid being covered by the other scratch.
Obviously you have to like the sound Morley, but for me that needed a volume pedals, has resulted in a good qualitprix, and quickly to bother with two pedals.