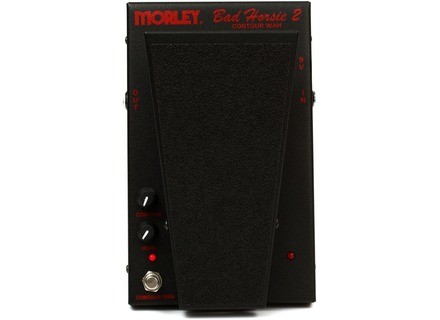 Morley Steve Vai Bad Horsie 2 Contour Wah
5
I got it for christmas but they are about $130 where ever you look.

It just rules. I've played through every crybaby and even the vox's. This one puts the last nails in their caskets! It's just the ballsiest wah there is and it's bigger and more heavy duty than the rest. The damn thing is a beast!

do you hear crickets?

It's built to take abuse and give it back with sonic brutality. Its all metal.

Best damn wah there is. I dont think another wah is gonna be this good until Morley makes a Bad Horsie 3! seriously people it beats the hell out of the other wahs and I can say this from 20 years of experience.

Morley Steve Vai Bad Horsie 2 Contour Wah
4
The Morley bad horsie 2 is A twist on the classic wah pedal design.It has the standard 1/4 inout and output jacks, a battery door on the bottom for a 9volt, 9 volt dc jack, and a switch to activate the contour controls.

It is also switchless so it turns on as soon as you step on the pedal and turns off when you remove your foot. There is an internal trim pot to adjust the time it takes to activate and bypass.

Setting this pedal up is no different than a normal wah pedal with the exception of the internal trim pot. The manual explains where to find it and how to adjust it. I find it best with a minimal response time but some people may prefer it to not instantly turn off. It is easy enough to adjust so you can see what works best for you.

I used this pedal in a guitar set up but my bassist seemed to like it on bass as well. Unfortunately for him the rest of the band thinks wah on bass is a terrible idea. This pedal has what Morley calls "clear tone buffer circuitry" what that means is that there is a buffer in the pedal that is always in your signal chain even when the pedal is bypassed. It is supposed to help drive long cables and it seemed to do that. I never had a problem with the buffer except when the pedal was near a noise source, like bad power adapters, it would boost the amount of noise in my rig. It was not too much of a problem but made placement of my power strip something that had to be considered for minimal noise. In general the pedal was a bit more noisy than I would like but it was intermittent. Some days I would have no problem and others it would hiss. It's just picky about things like power and placement

The wah itself I found to be more of a smooth filter than the standard quack of an old dunlop. Playing with the contour controls could get you closer to the funk territory but I preferred using it for slow sweeps. Having the auto on feature made this even better as you can start the pedal at the heel down position instead of it immediately being int he upper register. I have always been a fan of synth sweeps and this pedal allowed me to somewhat simulate that when placed after a dense fuzz box.

The occasional noise issue is what eventually led me to sell this pedal. I was running a pretty large pedal board at the time and I'm sure that added to the problem. I never had any issue with the pedal when it was on it's own on the floor. The sound is not traditional so if you are looking for that old school Hendrix sound you may want to look elsewhere. If you don't run a large board that adds up noise and want more of a filter than a quack I suggest trying this pedal out. There aren't many other switch less wah pedals out there and the only one I found that I liked more is the silver machine. The silver machine is much more expensive.
Did you find this review helpful?yesno
»

Morley Steve Vai Bad Horsie 2 Contour Wah
5
A signature offspring of Morley designs, the Steve Vai Bad Horsie II features
- optical switchless, auto-return on and off
- power off of 9 V battery or AC adapter
- standard ¼” in and out for connection between amplifier and guitar
- adjustable delay before pedal turns off
- Footswitchable contour

Given its switchless operation, the Bad Horsie II is very easy to use, and especially perfect for live situations. The quick on and off allows one to apply the affect in many more situations, where the typical ‘toe-down’ on/off would prove cumbersome and impractical. Additionally, the optical circuit implemented will never wear, so there is no need to worry of eventual maintenance as with your standard wah pedal. As with all Morley switchless pedals, a trim pot inside the pedal itself allows one to adjust the amount of delay before the pedal shuts itself off. The only downside of the switchless, auto-return feature is that achieving a stationary ‘cocked wah’ sound takes some more effort and a steady foot.

This pedal offers a slight twist in tone from the original Vai wah from Morley. The sound is still true to Vai, so don’t be expecting a completely new wah sound. If you’ve listened to Steve Vai’s music, you have heard the sound of this wah pedal. The Bad Horsie is full of the smooth and vocal sounds that characterize his leads. When you need it to scream, it is there, but it performs equally well for a more laid-back wah lead as well. The pedal also does better on the clean channel, and does not tend to overdrive so easily as some other Morley designs. The Contour feature adds to the versatility of the pedal, and allows a whole new side of the wah via footswitch. It takes out some of the mids, and makes the general response and sound of the pedal a little more ‘modern.’ Overall, tonally, with the addition of the contour feature, the Bad Horsie II sits between the original bad horsie, and the Morley Tremonti wah.

Another great pedal from Morley, offering a slightly more vocal and smooth wah, contrary to their usual modern and aggressive tones. The auto on-off feature, and the footswitchable controur, are irreplaceable for live players! Those seeking vintage wah tone, look elsewhere, but for this playing in high gain applications, Morley is the way to go!
Did you find this review helpful?yesno
»

Morley Steve Vai Bad Horsie 2 Contour Wah
5
Wah wah baby.:P
This is an all analog foot pedal with an optical control for effect oscillation. No USB, MIDI or other crazy editing, but controls for &quot;Contour&quot; (Q/range) and level...for boost or cut...altho' I can't imagine cutting volume when you engage a wah...durrrrrrr
Spring loaded...step on it to engage. Wiggle foot. Yay.

This pedal is very easy to get a great sound. I don't even think it had a manual...not that it needs one... Perhaps it has more options than a normal step on-it-and-play wah..but it is something you can set and forget. Find the sound you like and go.

You know...this wah will not please everyone. It is not a Fasel wah tone, per se....it CAN do a true wah sound..but not that 70's porno soundtrack wah..or that &quot;Shaft&quot; tone...but it works very well on modern rock tones and loves distortion. I have a Vox Clyde Mccoy reissue on my board as well...and if I need those tones..I use that. The BH2 can do approximations of those tones in a pinch..but will not deliver for purists. I have played a lot of Morley wahs in recent years and have to say this is the only one I have liked or bothered buying...( I used to have one of the huge chrome jobbies back in the 80's..it was decent..this is better.)
I keep the Contour control basically dimed for the widest range and keep the level flat so that it does not give me any volume spike. I have channel switching for that on my amps/rigs that I set for lead boosts..since I don't use a wah just during solos....but a good function for those who DO only use it for soloing.
I love this pedal. The tone is modern. Smooth on the high end...smoother than my Clyde...which might be interpreted as not as much range. This IS true, but it seems to work better with distortion.This limitation is realized during clean stuff and even playing bluesy wah lines, but works to great benefit with modern gain and for shred. Man, I love having both wahs. It is probably best to look at this as almost a different effect than a common wah....probably not what most people wanna hear, but that is the tradeoff. Remember..this is a signature wah....so it does something very specific to the artist who helped design it. Will it make you sound like Steve Vai? Nope. If you recreated his whole rig, then yes..this tone IS in there. This wah does what it is supposed to!

Been using this for a couple months...but I know what I like, and this foots the bill. The spring loaded feature is awesome. I love not having to make sure it clicks to engage. I was actually getting ready to buy the Fulltone Clyde Deluxe and feel quite happy I got this instead... ( the only reason I say that is because I have the Vox...otherwise this will not get those type of tones..but by the same token..the Fulltone cannot get these tones..the tone from the Bad Horsie is exclusive to the Bad Horsie, for what it is worth. You might love it..or hate it.)
I think the price is great. This thing is bulletproof and sounds great. How can you beat that? Unless this proves to be mysteriously unreliable, I will always have one of these...or if I stop shredding. :O
Did you find this review helpful?yesno
»
Read the 12 user reviews on the Morley Steve Vai Bad Horsie 2 Contour Wah »