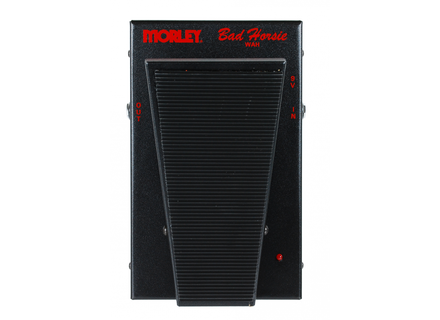 Morley Steve Vai Bad Horsie Wah
5
I purchased this wah pedal from Guitar Center in Dallas, TX. I believe I paid just over $100 for it. Can't remember as I've had it for years. I wanted a wah pedal that did not require an on/off button to work it (Dunlop).

I love the fact that all I have to do is step onto the thing and go to town, then release when done. I don't have to click anything or worry about misclicking during a sweet wah solo and screwing something up!

I do wish this thing had some way to alter the sweep range of the wah. Lo and behold not even a year after I bought this guy, they come out with version 2! And it has EXACTLY what I wanted that didn't come on this one. Damn shame. But apparently they listened to what people wanted...

I love the fact that this thing is built like a freakin tank! Gigged without backup for years and not one glitch. True craftsmanship!! Highest quality and very solid construction.

This thing is dummy proof. And with a steady foot, I can even get the sounds that the Dunlop Q-Zone claims....Just an awesome pedal and I still have it and depend on it! Kudos to Morley and Steve Vai - well done!


The unit sounds great. Nice throaty wah sound, pedal spring is very smooth. Instant on feature is wonderful!!! For a similar sound sample, check out Prince's solo at the end of Let's Go Crazy. Sounds just like his wah. Or, duh, check out the new Steve Vai album! Very sturdy piece of equipment.


Not much... You have to push the pedal down pretty far to get the upper end of the wah range.

A great choice for the occasional wah user who is concentrating on putting on a great show while sounding great, instead of standing in one place and trying to find 2K with his wah...

Morley Steve Vai Bad Horsie Wah
5
Personally purchased Steve Vai's Morley Bad Horsie Wah pedal at Guitar Center (Sprongfield, NJ). This Wah pedal was on sale for $98+ and the reason why I purchased it was because of the reviews I've read about it such as the ease of use and the great wah effect it priduces. Also, being designed to the specifications of Steve Vai (who is one of the best guitarists in the world) - you can't this product.


I like the ease of use and the wah effect it produces.


What I don't like: It seems like if you plug your guitar into a distortion pedal first w/c in turn is plugged into the wah pedal, the distortion does not work when you step on the wah pedal.


Comstructed like other wah pedals and is of good solid quality.

Go get and buy one!

Morley Steve Vai Bad Horsie Wah
5
A signature offspring of Morley designs, the Steve Vai’s Bad Horsie features
-optical switchless, auto-return on and off
-power off of 9 V battery or AC adapter
-standard ¼” in and out for connection between amplifier and guitar
-adjustable delay before pedal turns off

Given its switchless operation, the Bad Horsie is very easy to use, and especially perfect for live situations. The quick on and off allows one to apply the affect in many more situations, where the typical ‘toe-down’ on/off would prove cumbersome and impractical. Additionally, the optical circuit implemented will never wear, so there is no need to worry of eventual maintenance as with your standard wah pedal. As with all Morley switchless pedals, a trim pot inside the pedal itself allows one to adjust the amount of delay before the pedal shuts itself off. The only downside of the switchless, auto-return feature is that achieving a stationary ‘cocked wah’ sound takes some more effort and a steady foot.

If you’ve listened to Steve Vai’s music, you have heard the sound of this wah pedal. The Bad Horsie is full of the smooth and vocal sounds that characterize his leads. When you need it to scream, it is there, but it performs equally well for a more laid-back wah lead as well. The pedal performs very well over the range of the neck, with good response in even the upper region of the treble ‘E’ string. Compared to the Tremonti wah form Morley, this pedal is definitely more vocal and smooth-a little more expressive rather than so cutting. The range, as with most Morley pedals, is more than enough for great expression. The pedal also does better on the clean channel, and does not tend to overdrive so easily.

Another great pedal from Morley, offering a slightly more vocal and smooth wah, contrary to their usual modern and aggressive tones. The auto on-off feature is irreplaceable for live players!

Did you find this review helpful?yesno
»
Read the 10 user reviews on the Morley Steve Vai Bad Horsie Wah »