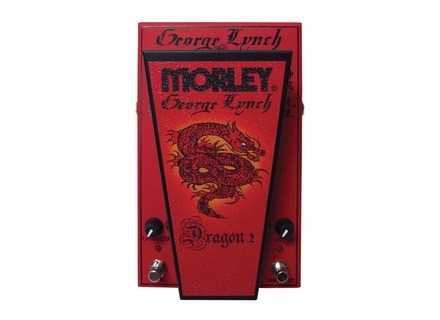 Morley George Lynch Dragon 2 Wah
5
Morley catalog is fairly well supplied wah, mainly signature models, like its competitor Dunlop. Only now, the pedals "signatures" often brings very little outside ... their "signature".
What is it for this model? Is it a wise choice or just a collector fan?

First point out that I know George Lynch in name only by 2-3 and videos on the net. I therefore give my opinion on the pedal and not the signature. I also want to criticize this pedal meet his counterparts and competitors to help choose the undecided.

This follows the Wah Wah Exit Dragon limited edition (1,000 units worldwide, 22 for France) which is an evolution.
We find two features of course the classic pedal Morley:
- Design common to Morley by finishing red-orange dragon and Chinese writings quite successful
- The system "switchless" that can trigger the effect by simply placing his foot on the pedal and vice versa.

For the rest:
- Proudly made in USA (it&#39;s not me saying it is written on it!)
- Switches to optical detection
- 9V battery power or mains (adapter not included, redundant!)
- Boost up to +15 dB (knob on the left)
- Mode "wow" for a second tone wah (switch on the left)
- Mode "stuck wah acting as a simple bandpass whose frequency is adjustable via a potentiometer (potentiometer and switch on the right)
- Input / output guitar

Solid and serious.
Two black dots:
- Plastic packaging: not very stylish and not allowing an optimal storage
- The non-slip grip so glued (or use)

Operation is simple and ergonomic.
The system "switchless" very practical.
The "stuck wah simple and practical: it helps to remember the" sweet spot "for many useful passages with fixed wah.
The boost mode and the "wow" simple to use and accessible.

A manual? No need!

Negative points:
- The non-slip surface: irritating to bare feet, socks and aggressive little grip on the soles smooth. I prefer the rubber type pads Dunlop or Vox, smartest and most effective
- The boost is dependent effect: that is to say that he engages with the wah. Be careful not to overdo the boost for not annoying volume changes with each activation / deactivation!
- The system "switchless" which offers an obvious advantage but lost to the passage of very useful features wah "classics": the fixed wah and triggered the end of the race: we can not have everything (well ... see Morley thereafter).

We are in the field of modern wahs: his clear and aggressive ideal for massive distortions.
For blues or funky pots is less suitable because the wah tends to saturate the end of the race.
Mode "wow" approximates a voyelliseur and proposes a more dramatic as the Wah with a more aggressive dynamic outset: with a good distortion, dramatic effect guaranteed!
The boost is welcome wah on interventions that tend to eat a bit dynamics (logique!).
Mode "stuck wah is very useful for songs with wah fixed and it serves primarily to keep in mind what is called the" sweet spot ", accessible at any time without having to search.

Nothing to say, it&#39;s all good for hairy. For others, this wah will not prove quite sweet.

Excellent pedal. Good on the other hand, the Morley wah wahs are generally excellent. And then there is the competition that features many quality models. It is not enough to buy it eyes closed.

While this pedal is compared to her sisters and their competitors?

George Lynch is a "serial endorser" of which we can discuss a priori interest pedals "signatures". But here he offers a model that deserves wah its place in the forefront. This wah has indeed interesting and unusual features:
- Morley wahs over: there are two unknown functions in other models. Mode "wow" and how "stuck wah providing for a sound unusual but interesting and usable, and the other a novel based on a wah and found more readily on Auto-wahs . Otherwise we find a boost, rather conventional in Morley.
- Compared to the competition: technology "switchless" of Morley and his modern ideal for large saturations.

So this is a pedal of choice, whether at Morley, where it can challenge the supremacy of the Bad Horsie 2 Steve Vai, but also in the competition.

Speaking of competition, two manufacturers Morley attack on his home turf:
- Ibanez Weeping Demon with excellent: modern pedal more versatile and comprehensive, offering a "switchless" identical with a conventional switch! All parameters are adjustable (Q, boost, equalizer, rocking stiffness, ...) and all for 100 euros! Lack of course the mode "wow" and "stuck wah" when the memory of the "sweet spot". The Dragon is an interesting alternative.
- G-Lab with two products: the True Bypass Wah-Pad that easily transforms your wahs all (or almost) switchless and true bypass. The switchless system is different since the effect is activated as soon as you set foot on the pedal but it can be in any position. It loses in passing the conventional operation and everything is offered for 100 euros anyway. And finally Wowee Wah: excellent pedal very versatile and complete with the same mode switchless the pad, but also the classic mode and extended but simplified controls (Q, boost, equalizer, rocking stiffness, ...). Still missing mode "wow" and "stuck wah" with "sweet spot" in memory. 175 euros.
- I deliberately did not mention the wah Silvermachine MkII Musician Sound Design: it is almost impossible to find and indeed must have already heard ... (Personally I found it by chance and I ordered it directly to his creator, Hardy Kurandt in Germany because it is not found elsewhere!)

You understood, the Morley wahs now have serious competition, but the Dragon 2 is a more attractive alternative with its two additional modes relatively unusual in this type of pedal.
And then, what mouth ...