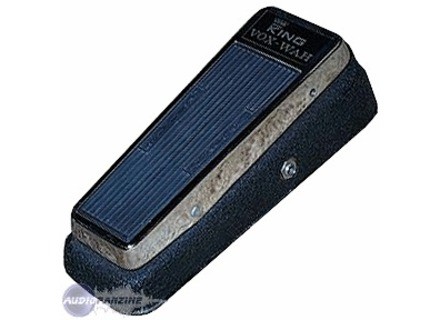 
The range and warmth is outstanding


Definitely worth the money. Arguably the best for your money. Everyone should own one. Classic!

Vox King Wah
5
The Vox King Wah is a pretty basic wah wah pedal designed for electric guitar.  It has 1/4 inch connections and is powered by a nine volt battery.  If you have ever used any other wah wah pedal before, you won't have any problems at all understanding this pedal.

The Vox King Wah is extremely easy to use, as is the case with most wah wah pedals.  There isn't anything different about the make up of this pedal when compared to other wah wah pedals, so that makes using this pedal quite easy and universally acceptable.  Simply press down the top of the foot pedal to engage the effect and move it back and forth.  Beyond this there is nothing special that you need to know about using this pedal and a manual isn't necessary because of how easy it is to use.

I've been using the Vox King Wah for a number of years and it is my go to pedal for recording when I am looking to use a wah wah pedal.  Since they are no longer made, they aren't all that plentiful but can still be found somewhat easily around on the internet and won't cost an insane amount of money.  This is a really well built pedal and will last for a while as long as it is treated right.  If you are looking for a vintage wah, I would encourage you to look into the Vox King Wah!