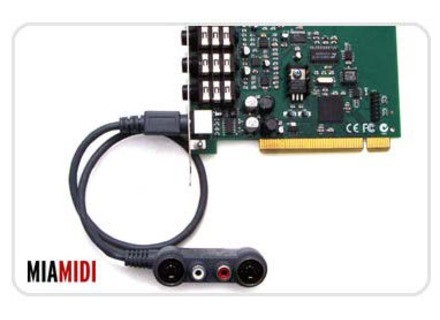 All user reviews for the Echo MiaMIDI

boogi man's review (This content has been automatically translated from French)

installation without worries, no incompatibility

I use it for almost a week before I had a MAUDIO 2496 (not bad) and an RME HDSP 9632 (blah).
purchased from Cygnus in perfect condition, it is much more transparent than my ex rm, yet convertos are apparently less good!
there is no noise (unlike rm)
the only thing I blame him is the lack of headphone
I highly recommend!
Did you find this review helpful?yesno

Echo MiaMIDI
4
Multi-client driver that allows to operate multiple progs at the same time and record the mixed stream.
For the composition has only connect external MIDI instrument.

Stable drivers from 98 to Seven under cubase and updated as required.
Was mounted on a 2 GHz P4 HT with 1GB of RAM and 250MB disk.
Latance of 6ms and I've never counted the NB track but I have e poejet 40 tracks.

A good choice of sound card to start a HS
Did you find this review helpful?yesno

tokihano's review (This content has been automatically translated from French)" Survivor"

Echo MiaMIDI
5
What characteristics have motivated your choice?
I / O symmetric
MIDI

With which the instruments or systems do you use? For what purpose?
Making voice, guitars, subcultures analog stereo sources (Minidisc, video game consoles etc.)

The drivers are stable? impec

What software do you use most often? Cubase, Audacity

How many tracks you get to record / play simultaneously? rec: 2 inputs so two tracks: p / play: it depends on the particular project and it is the CPU and RAM of the PC that limit and not the sound card.

Are they updated frequently? when to

What you get lag? negligible

The installation is done it without problems? no

The general configuration is easy? yes

Have you encountered any incompatibilities? no

The manual is clear and sufficient? never read

How long have you use it? 10 years

Have you tried many other models before buying it? not an M-Audio Delta10-10

What is so special that you love the most, least?
most: stability and compatibility foolproof, easy
the least: simplicity = 2 E / S, and that's it!

How would you rate the quality / price? most excellent in 2002 saw the specs, always good in 2012 saw the holding of this material over time: it is simple, stable and it works.

With experience, you do again this choice? yes
Did you find this review helpful?yesno

Echo MiaMIDI
5
I wanted a very simple sound card with good input, one DSP manager in the best latency and a MIDI connector.
Independent mono inputs in 6.5 minutes

Please note that this card is not a multimedia sound card. it can confuse some not to find out classic line. But it remains very stable even in the presence of the sound card on the motherboard.

I make music only in sound recording studio (not live). Taken on its small preamp lamp connected to a small mixer itself connected to the analog inputs of the sound card.
The analog outputs are connected to a headset samson péampli with 4 outputs. The digital output is connected to the Edirol MA-10D monitors.
The MIDI input is connected to a master keyboard and digital piano
Recording direct-to-disk guitars, bass and vocals.
Programming as addictive drums vst instrument, EZDrummer, SampleTank
insert vst effect like guitar rig.
I turn on XP pro.

The drivers are stable although I sometimes (not often) to have freezes in session. Ever taken of her but in settings plug-ins. Hard to say if the card or plug that plant. But given the state of the console of the card, I would go for the card. But it is sufficient simply to save the session and restart cubase for the problem continues. AND it's still rare (5-6 times a year)
Echo does not work anymore on drivers for XP (not since 2007,
V 7.3) but it is developing for Vista and Seven.

I come often to have 6 tracks + 2 stereo or 3 VST instrument (drums + piano). For mixing, it is sometimes necessary to balance the buffer to avoid breaks. For the record, beyond the 3-track stereo with 4 insert guitar rig, you often freeze to keep track read margin on taking DTD.
Blame it on the card or my config etram obsolete with PIV in a DDR?
I can easily work with 7 ms latency, which is more than enough, even 44khz

Installation without any particular difficulty except that it seems preferable to install the drivers first before pluguer the map. Why?

The config, even if it is unnecessary to use enough pressure is still a mystery to me, even after all this time:
the wave device configuration with the "WDM" and "pure wave" and the links between inputs and outputs remain an enigma to me ... never understood the utility never seen a difference ... the same for the PureWave buffer size ...
Only drawback, it is better to fix the frequency to let the card adjust to soft drinks. Sometimes it breaks all small problems but nothing serious.
The lack of French manual is damage ...

I use it every day and sometimes intensely for 6 years at least.

I had previously spent by the soundblasters.

I like its ease of use and the whole side of his functions (audio + midi).
She even manages 5.1 (I do not use it)

What I like least is that it seems to let me go for 1 week but still, after a quick inventory, I plan to buy back the same!

I find the value for money and top top top. Today it is 150 euros. It's really a steal for those who want to make a mao + level as correct.

Eyes closed and hands behind his back, I redeem the same!
Did you find this review helpful?yesno

stega's review (This content has been automatically translated from French)

Echo MiaMIDI
5
I wanted a return to PCI, APRS a experience with Firewire hard. I had a TC Electronic Konnekt 6, which is a very good card with excellent Pramper, really nice shape for the home studio recluse.
But now c'tait totally unstable on my config, hair pulling.

drivers are super stable with seven windows, I can work without any worries, forgetting the constraints related computer thing, and has changed my life over the tc Konnekt 6 I had before.
Panel config clean, easy to understand.

trouble-free installation, no incompatibility. Ah, if I close the Kaspersky install the driver for the card been planned to Windows Seven, otherwise

I've had a good month, uses intensment. Not a single crash dplorer. So I found the joy of composing. I combines Mindprint Trio, and the least we can say is that I'm happy overall.
Manufacturers are forcing us prfrer cards nomadic firewire or USB, limiting the choice for PCI. But when you're sdentaire, even when it is very very con. It may be less "sexy", PCI, but it 10000000 times more efficient and stable.
The miamidi, she is super dynamic, the sound is really excellent, multimdia what I've tested up to whichever PCI (delta audiophile and EMU 0404).
Really a very good deal, I will not change anytime soon.
Did you find this review helpful?yesno

Echo MiaMIDI
5
CF other opinions
I rejouterai more RAM you have, the better ... but this is valid for just prèt all!

Installation hyper simple.Pas incompatibility if the drivers are up to date.
THE general config is super simple.
I have not read the manual yet I've had 5/6 years.

Use for 5/6 years.
Main quality: recognized in all my software and often by default. THE sound is played perfectly.
I tried the EMU / Creative card, and audiophiles. But the price / quality ratio is UNBEATABLE !!!!!!!
Experience speaking of herself since I use again and again. Is it really useful to ask me if I would do this choice?
Did you find this review helpful?yesno

Echo MiaMIDI
5
CF other opinions
I rejouterai more RAM you have, the better ... but this is valid for just prèt all!

Installation hyper simple.Pas incompatibility if the drivers are up to date.
THE general config is super simple.
I have not read the manual yet I've had 5/6 years.

Use for 5/6 years.
Main quality: recognized in all my software and often by default. THE sound is played perfectly.
I tried the EMU / Creative card, and audiophiles. But the price / quality ratio is UNBEATABLE !!!!!!!
Experience speaking of herself since I use again and again. Is it really useful to ask me if I would do this choice?
Did you find this review helpful?yesno

Echo MiaMIDI
5
CF further notice
I rejouterai the more RAM you have, the better ... but hey that's true for just about everything!

Drivers super stable and updated every six months. (Depending on the service pack and Windows versions)
Use with Live7, Audacity, SoundForge and Cubase SX.
Latency very mini, 1-2ms.

Installation hyper simple.Pas incompatibility if the drivers are current.
THE general config is super simple.
I have not read the manual and yet I've had 5 / 6 years.

Use from 5 / 6 years.
Main quality: recognized in all my software and often by default. The sound is reproduced perfectly.
I tried the card EMU / Creative, and audiophiles. But the price / quality ratio is unbeatable !!!!!!!
The experience speaks for itself, since I use it again and again. Is it really useful to ask if I would do this choice?
Did you find this review helpful?yesno

He bought 'some time, I managed to walk at MIDI than done

I installed the drivers, but no way to get a signal or sound whatsoever.

I opted for an echo mia because I had the opportunity to work in a small studio with his old version (no MIDI), and it was great.

But I'm not a newbie, I turned on my machine multiple sound card (Sound Blaster Audigy From the presonus FIREPOD through M-audio, line6 ...)

Dipstick even tried on two different bikes and nothing to do.

In addition, the technical service is obnoxious, rude and abusive, having sent me shit like no one had dared to do: Who do they!

P't'être was a manufacturing defect in these conditions but replaced by a dipstick M audiophile firewire, the technical service is in any more friendly and professional.

But having worked in a structure offering workshops computer music and having their bikes with these cards, I know as long as there is no computer problems it's going, but once the map starts messing once after the bugs and crashes at inopportune life! they have also replaced them with M audio ...

So super disappointed by their products, given the exponential number and quality of competitors at any point of view, they do not deserve that one is still interested in their product to me.

I do not regret it anyway ...
Did you find this review helpful?yesno

Jeffkongs's review (This content has been automatically translated from French)

Echo MiaMIDI
5
- What characteristics have motivated your choice?
The price, components and access to audio performance Pro, digital connections, the outputs virtual handy with VSTI and MIDI

Very easy installation, stable drivers (to update the site Echo), no worries, no crash, his supper, not need the manual, clean interface

I highly recommend it to all users of home studio they are a beginner or are broke or both and those who do not need more inputs and outputs
Of course the sound of the DVD and CD read with the software of your choice work perfectly
The price currently offered this card is really a case and the sound is there TOP
Did you find this review helpful?yesno
Cookies help us improve performance, enhance user experience and deliver our services. By using our services, you agree to our use of cookies. Find out more.