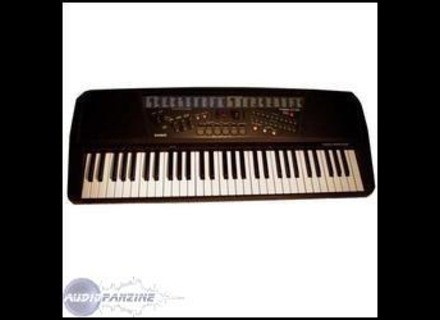 
3 user reviews
Find it in the classifieds starting at $90 Avg used price: $90

Casio CT-700
4
I have a Casio CT-700 61 key keyboard. I enjoy playing this keyboard and fun to play on. The only drawback is that it has a 12 note polyphony in which the note drop out when I use the sustain pedal. It has 99 rhythms, and 99 instrumental sounds. The sounds I like best are the Pipe Organ, Fantasy and Cathedral sounds.

Casio CT-700
3
Arranger keyboard with 61 keys pressure sensitive. Touched kind synth. A bank of 100 rhythm patterns and another 100 sounds divided into 10 categories (Rock, World, ect ... for patterns, and piano, winds, sets, ect ... for sounds).
MIDI In and Out. It's a good point!
Jacks for headphone and sustain pedal.
Tone knob to adjust the pitch.
9V DC power jack.
No effects section.
No sequencer.
Ability to record his compositions with the small included memory.

Configuration (too) simple. Nothing is editable, everything is already pre-registered.
Almost nothing is realistic in this arranger, both sounds (ugly, it must be said, except the sound of cathedral organ, which I liked), and in terms of patterns (too mechanical and repetitive, and often do not really correspond to reality).
To play chords on beats two possibilities: either they are really playing (the keyboard is able to recognize the main types of agreements, reversed or not) or was the Casio system: it plays a note (eg C ), the agreement is major (C major), two (Do Re), the agreement is a minor, three, was a dominant seventh chord, four, was a minor 7. It's good for a child, but to learn to play really ...
Each pattern has a right to intro (long or short), a wagon, a fill-in, and a coda (short or long).
Ability to independently adjust the volume of the battery (or drums), and the other intruments.
I never read the manual, except for learn how to use MIDI.

I used it for over ten years. I improvised and composed my first songs on it. It was a gift, and I've always been very happy.
He is now in the basement (there is a button that is not responding).
Its features are completely outdated today, it is also why I no longer use it but it is a keyboard which I like because it has sentimental value ... my first contact with a musical instrument!

And, on occasion, I may be reused in me as a master keyboard ...

winnie's review (This content has been automatically translated from French)

In terms of configuration is very simple: there are not any!
We choose one among the organs, trumpets, pianos, harpsichord, drums, percussion Chinese and whatnot ... and we play.
You can play over the trimmings on offer with the right hand, followed by the left hand (it runs the accompaniment by playing an agreement) ... mmmouais, blah ...
But at least you will find no easier (part may be a piano: D)

Prt of it - play ... Except that it's ugly! This is an old synth with trs trs old sounds! There are three piano sounds, and they are ugly all three! Even when there are few things that ring true, but for nostalgic 80's only!
When I was offered this synth I had 5 or 6 years then j'tais forcment not hard: D

But hey it's not his fault if he is old! I think c'tait plutt not bad for the era!