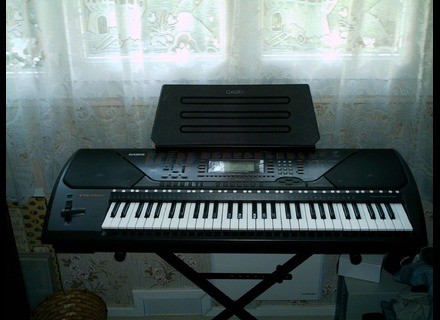 EthanVanGuard's review (This content has been automatically translated from French)" Perfectible"

Casio CTK-711EX
4
Arranger Keyboard 61 keys.
Section of General MIDI compatible namely some reverb, chorus, flanger and a few small changes, but look no distortion or resonant filters effects. This is what GM.
MIDI In and Out.
An assignable sustain pedal jack (not bad) and a headset. Basta. No double jack L / R that would have allowed me a refund on my stereo mixer. Settle for mono through the phones jack. Or go through an adapter.
Polyphony 16 It's good because it's easy to assign any sound to any channel. So with my MPC 500 is not laborious to choose the patches.
232 sounds. 128 GM sounds, 64 variations, 8 drum sets. The sounds are not editable but can be created new waveforms and store them in the 32 user sounds. Pretty good.
Sequencer in real time. It pulls a little hair before understanding.
Speaker to render satisfactory.
Pitch-bend, modulation button ..................... I will go and fill out the chart.

Casio is the right idea here (I speak for beginners who are most affected by this keyboard) to indicate the overall capacity of the beast on the beast, and to group the buttons on a single skill. Although for initiation, what. To see the effects, read DSP on the keyboard. It's not more complicated. So for most manipulations, it is unnecessary to use the manual, I have not.
I do not know if we can edit effects. Sequencer real time to change a style. Are available 5 tracks of style, plus 6-only lanes to the sequencer. Registration does not pose a problem: after • REC, just start strumming to begin playback of the pattern. Suite is saved with the ENTER key. No manual you put a little time to figure it all out, especially as the Enter key is almost the least visible on the front panel.
Damage to the transformer heats, heats and Stops. After an hour and a half hour of use.
The styles are sometimes used, although most are laughable, there are some that stand out from the crowd.
And once you know all that, we can dubber above, cut tracks add some effects on the mix .... make models even real sounds.

In this type of notice is missing a category and the sounds.

- General MIDI: the irony of this system is that this standard still defines the same types of sounds, but not always sound the same! So I could compare my 8 banks GM partition editor and sounds of CTK.
In any case, the acoustic sounds are laughable, electric sounds, for some, limited use (and used until we find better elsewhere), and electronic sounds that range from useless to excellent. In the lot, I use the most: Warm Pads 2 (excellent) and electric bass (correct). These are the two best GM sounds.
For cons, the fifths (lead 7) casio lack resonance versus Finale NotePad, the bass + lead (8) is less convincing on the casio, but instead saw the square and are much better on this keyboard Finale.
- 64 variations: variations of electric pianos, organs, basses, pads, some of which are characterized by a bend of an octave, in a sense for some, the other to the other. Why not. I think this is the most interesting sound of the instrument.
- 8 drum sets are distressing to correct, and less powerful than the tones, which paradoxically have a certain warmth that I do not find in Finale.
Use these sounds with a bit of reverb, and it will be fair even good.

The effects are sometimes laughable, but some can help.

I know the 711ex is owned by a friend of mine who found it a little less intuitive than I keyboard. For 3 years or more.
I've tried a few arranger keyboards before this, but this is the first one I tried with integrated sequencer.
I like most:
- Some sounds are downright goods.
- Some styles also
I like least:
- Sequencer who asked me the time.
- The transformer that loose ARGH !!!!
- The acoustic sounds, it's GM

A small audio demo ?? know that this song has not been done live, but it could. I do not yet know well the sequencer. The noise from the music comes from a cassette player.
https://soundcloud.com/chansonlive/ethan-van-guard-a-va
Did you find this review helpful?yesno
»

Casio CTK-711EX manuals and other files