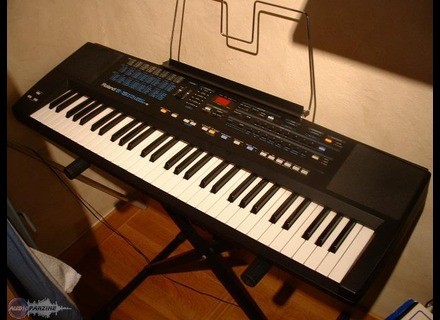 Roland E-15
4
I bought this keyboard while I was still in high-school (1990 or so). Yt apparently did not become "available' until the early 90's, but in Canada, I am sure I was one of the first users. The keyboard split is brilliant, and I just played a gig with it TODAY (May 2016). I love it. Its sounds (I use piano, some organs, a slap base, some horns, and some strings) are super. Still does a great job, and I love to play it. Had some keys replaced (it fell down some stairs in my rock band says!) and the left speaker is smashed and silent, but I use it live to this day. I do not use its arranger or MIDI, but I do practice with drums for tempo. I bought it to write songs with, but used it for countless gigs. The only downside I can see is that I wish the sounds were just a little deeper. They are super, but seem a little tinny on occasion. Overall, my first and only.
Did you find this review helpful?yesno
»

utopik's review (This content has been automatically translated from French)

This is what is simpler to use keyboard ...
This is rather limit any of the same level of features, and sounds are not ditables.

I use it as keyboard matre for 2 months. This is my girlfriend gave it to me and apparently prt
it's pretty old as craft. I would say for the performance of his GP to have is not bad at all. The worst part is that the sound does Roland's not bad, however. I use the sounds of piano, bass, pads and enough frquement.
I would say that plutt than buying a keyboard matre 1500 nine balls, it's much better to try to capture an old trick in the kind of opportunity (5 octave, and VLOC. In addition, one can come across sounds nice.

Trs easy to use, the manual is as clear as those of Roland of Contents E-SERIES. This keyboard is suitable for a majority of people: from beginners to professionals not too demanding and / or with little money. It is used note in the bustling evening in the scolaritles schools of music, or even in a group (even if the D-SERIES was much used thanks a way of Fast Fashion's addition of a squenseur). In matre Midi keyboard, no problem. In a polyphony of 24 notes, how GS is accepted. I also note a mix of 6 tracks trssrieux for the keyboard layout: Upper, Lower, Accomp, Bass, Drum, each of which can be dyed Effects pressing simultanment their + and - allowing also to find the volume by pressing prcis again on their + and - simultanment.

I connas this keyboard for 11 years. I am, however, provides rcemment in 2003 and is the collection's outdoor trs beautiful as indoor. I worked mainly on keyboards E-SERIES. The E-15 keyboard is surprisingly not be underestimated. Its dmonstrations are also promising trs. A single point dcevant: the E-15, as the E-16 is notified 64 styles. In ralitils have only 32. Roland had just programmed their arrangements and they were wanting more that to a key called "Arrange Advanced" to provide an instrument supplmentaire arrangement pr-programmme they have not implementation. In your exact consquence? The first 32 are identical to the 32 following with the single exception of an instrument supplmentaire, but it is the same rhythms, the same low, and the same "accomp." (The instrument is "up" in the arrangement) with sometimes just a note of Difference. The E-35, its suprieur, possde button "Advanced Arranger" and is notified "56 Styles". We would therefore view Premire "There are less". Wrong! Because thanks button "Advanced Arranger" the E-35 is REALLY 56 styles, not 64 / 2 = 32.
I took a lot of room to explain this problem is important, but that night nothing on the keyboard that I still love because of my memories of adolescence, and its sound quality rarely gal from other keyboards. Of course, it may dernirement, keyboards make me out lie. I put 06.10 of its modest technical specifications + 1 point for its friendly aspect nanmoins trs.

louisdom's review (This content has been automatically translated from French)

Very easy to comprehend, but the sounds are not editable.

Keyboard bought us in 1995 for $700 as a first keyboard. I did some gigs with it in small groups and it always been of precious help. I would like to stress here the quality of this gear sounds damn good even when. The sounds are very good, especially the piano sounds that are difficult to match even with more expensive devices. For me it's a keyboard with a more sentimental value. It has always been of precious help.