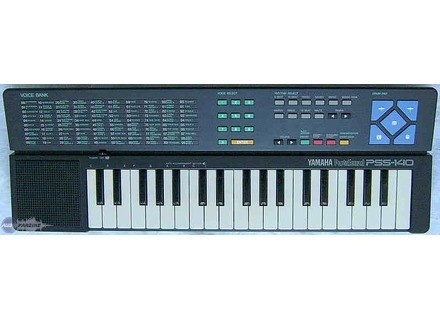 PSS-140, Keyboard Arranger from Yamaha in the PortaSound series.

A small sequencer with certain patterns (rock, pop, samba etc etc ....). One can only adjust the tempo.

No editing sounds.
I do not remember the manual.
Configuration for children, so super simple and effective.

I have since I was a kid.

I had never bought a keyboard before it in 1987.

This is a funny little thing, but that does not justify a purchase at this time today. That said, certain sounds are interesting, but totally unusable in a mix.

d.o.k's review (This content has been automatically translated from French)

First of all let us be clear that this is more a toy than a real instrument.
However, nothing prevents us to do something good.

It is a 37 keys keyboard, well made (I mean the keys). It's not progressive response 0 or 1.
100 sounds in total, many of which are very "cheap", thin (few spectral richness):
- A good half of these sounds seems unusable, except perhaps to the music of François Perusse (2 minutes of the People), and again ... Not certain that Grandaddy (special group set up to use keyboards pretty cheap yet brilliant) would have wanted.
- A quarter not bad at all: some original sounds that can make their effect (including "Fireworks", amazing) and others, usually sounds like organ (indeterminate) rather honest.
- The rest, yeah, why not.
It looks like that finally provides the MIDI keyboard with 256 sounds (it is not MIDI).

For organ sounds exactly (the sounds that I am most interested in a keyboard), it is often entitled to stamps mild and sweet (no sound a bit aggressive for example) but not rich. Some might well be used in background accompaniment. The addition of an effect as a slight distortion or a bit of reverb to make it still more credible.

Once we chose her, no additional option: no reverb or vibrato (but there is a vibrato organ), modification of envelope or pitch, or sustain. Too bad.

The keyboard incorporates a small drum, a practice only to work. I can not imagine a hip hop group to use, even in an offset manner. As usual, many styles (rock, bossa nova ...). The addition of small pad on the side (snare drum, bass drum, cymbal, tom) can afford to have a little fun.

The tempo can be adjusted through two + and - buttons but no screen available to display the value.
Ditto for the volume, two buttons and no visual inspection possible. Not very practical.
Same as for the choice of instrument: type the two-digit number followed by enter valid. No way to check if the selection is good, but it is convenient to use: one can indeed enter the two numbers in advance and later press enter to quickly change sound: a good point.

My copy (bought in flea market) has a little breath.
Mono output jack with 6 '(instrument type jack) to connect an amplifier or headphones.
No MIDI. Small size, easy to carry.
Operation with batteries or AC adapter 9-12V.

To conclude, this is a nice little toy that is not necessarily being a kitsch gem and cheap as could be the other small keyboards with time. However, I plan to use a few times with my group in an offset manner (the effect Fireworks, great) but more seriously (3 or 4 organs which add a few effects pedals).
Price level, I personally would put no more than 7 euros in the keyboard. But in the end its use value could be higher if you like the keyboards a little cheap, easy to use, small and light.