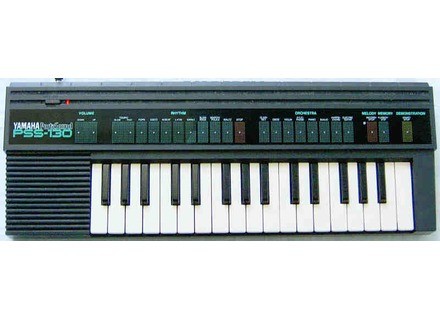 PSS-130, Keyboard Arranger from Yamaha in the PortaSound series.

Yamaha PSS-130
3
The Yamaha PSS-130 is a digital keyboard and similar to the PSS-30. A friend of mine has this at his house and I was messing around with it the other day, although I do not own one myself and do not plan on owning one either. They keyboard has 32 mini keys and a variety of cheesy sounds and rhythmic patterns. It's got two voice polyphony as well as a built in demo. It can run on batteries or a power supply although I do not know what kind for either as my friend already had working batteries in there and I didn't care to check what kind they were.

Using the Yamaha PSS-130 shouldn't be difficult at all, as it simply has a series of large buttons for choosing sounds and rhythms. The first section is a volume button, followed by a series of rhythms and a series of orchestral sounds. It then has a small memory bank and the demo button. That's all there is to this one, so I don't think users will be needing the manual.

The sounds you'll hear from the Yamaha PSS-130 are very cheesy, and bordering on the not useful kind of cheesy. I can see these sounds being used in some throw back electronic music, but I wouldn't use them for the kind of music I work on. It's fun to mess around with and you can get a bunch of different sounds, but none of them are anything close to a real synth sound and aren't quirky enough to be campy.