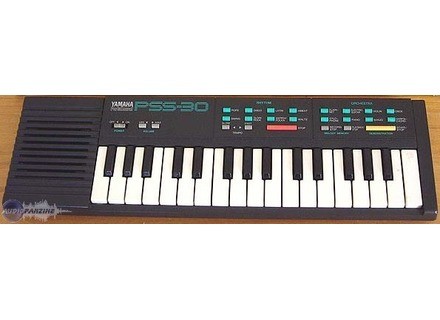 PSS-30, Keyboard Arranger from Yamaha in the PortaSound series.

Yamaha PSS-30
4
The Yamaha PSS-30 is an extremely small electric keyboard that is really only good for getting cheesy sounds and drum beats. I doubt anyone would be expecting too much from a keyboard of this size and look, but for what it is the PSS-30 is pretty cool. The keys on this keyboard are just as small as you can make them! I imagine that Yamaha had kids in mind when they designed the PSS-30. It's a portable keyboard that requires either battery or wall power, but when I used it it was running on battery power, although I'm not sure what type of batteries it needs exactly. The keyboard has 32 keys in total and only has two voice polyphony, so you can only have two keys played at once. It's got a variety of different tones and drum patterns, all of which are extremely light and cheesy sounding. It's got sounds that are supposed to emulate electric guitar, violin, piano, and a bunch of others, with eight preset sounds and eight preset rhythms in total. It's got a few other features that are pretty standard on these old Yamaha and Casio keyboards. I believe that the PSS-30 is from the late 80's, but I don't know what year exactly. This isn't the type of instrument that I'd recommend seeking out, as there just isn't anything all that special about it. If you do come across a Yamaha PSS-30 it's definitely fun to play around with for it's cheesy sounds but isn't to be considered a serious instrument by any means. There are plenty of other Yamaha keyboards and those by other brands out there that are very similar to the PSS-30, so if you want something like this to mess around with but can't find a PSS-30, don't sweat it as a number of other keyboards can serve the same function. While it's cool for what it is, the PSS-30 isn't something that you will find yourself playing too often beyond it's initial kicks...
Did you find this review helpful?yesno
»