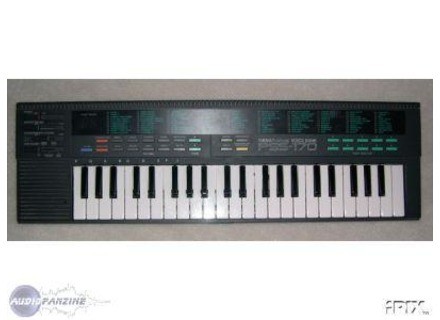 PSS-170, Keyboard Arranger from Yamaha in the PortaSound series.

100 selectable pre-set FM synth sounds. Up to 8 note polyphony, decreasing depending on the sound selection, effect, and rhythm usage. Drums alone or with rhythm pattern based on 8 different beat styles.

Yamaha PSS-170
5
This keyboard is definitely for a beginner player, yet it has some great features compared to other PSS keyboards. It is polyphonic up to 8keys, which is all dependent on which sounds and effects are used. Some of the organ sounds can be used to up to 4 note play or more while utilizing effects and auto-rhythm.

Some of the 100 FM sounds on the keyboard are relatively useless for more than personal usage, but are fun none-the-less. Some of the sounds are very useful. The pianos, organs, synth bass, and strings are quite palatable. Dog barking sounds is one that has only amusement application for practical use, although I wouldn't discredit a very creative individual being able to use it effectively.

The effects are a set of three: PORTEMENTO, SUSTAIN, and VIBRATO. All are quite nice, but cannot be changed in any way if used. Depending on the instrument, VIBRATO and SUSTAIN may already be added into the sound.

The rhythm section offers several options, going from 'single-note' chord, although a minor chord and a major 7th requires two notes, whereas a minor 7th needs three. For multi-track recording, there is no way to separate the auto-rhythm from the drums, although the drums can be played alone. If set with the auto-rhythm ina chord position, it is possible to use the single note to create a chord. In some of the auto-chord positions, a sound will be made in addition to the auto-chord and drums. This could be useful, but is annoying if one desires to just play the auto-rhythm.

This is a fun keyboard to own and play. For the market at the time, it's a very capable tool for a beginner. A musician using it professionally would encounter limitations, but I could see some very nice sounds being possible with this low-fi instrument.