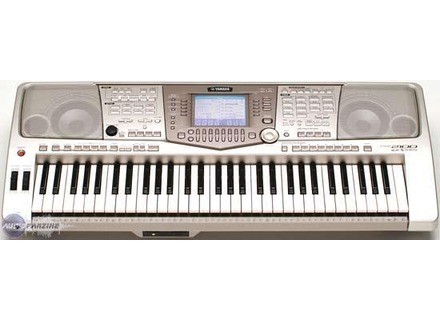 PSR-2100, Keyboard Arranger from Yamaha in the PSR series.

iob27's review (This content has been automatically translated from French)

This is an arranger with a wide range of sounds.
The USB port has never worked well with mine (bad point).
The floppy drive should be replaced by a card reader.

Polyphony (64) is sufficient, I have never at fault.

The number and variety of sound is adequate and covers a wide spectrum.

The synth sounds lack of depth, especially in the bass. Many of the synth sounds are accessible from the XG (480 votes). They are fairly standard but are struggling to compete with a "real" synth emulation even as JP800 or older as the D50. Nevertheless one can make illusion with some slicks.

It is very lightweight (compared to a Roland Super JX, an ASR 10, SY77 ... a) is a can "low end", but ultimately it is strong enough (I have my cats who jump on every day pout reach the top of my wardrobe ..)

The manual, as so often with the yamaha product, is not very clear on advanced features.
It's not too annoying to the extent that most users will not seek to go beyond the use of basic sounds and accompaniments.

Overall, this machine is more powerful than shown in the manual.
In particular, the DSP can radically change the sound.

Apart from this, the use is "fun" is really a simple machine, which starts from the hip.
Most of its styles very well planned and varied, although a few shots.

Editing sounds is simple, but quite limited compared to a real synthesizer: you just make little changes in some parameters, it is not really the creation of sounds.

Overall it is a machine really thought of music and very musical too.

We can juggle with the styles, all in sync: impressive.
Examples of rift guitar are particularly successful and varied.

The "vocoder" is not actually what we used to hear on a synth that is very "robot" on the contrary, it is very effective and creates very natural voice in against the field, quite impressive. As against this, can not do these voices "robots" of analog vocoders.

We also use this little microphone to convert any signal into MIDI notes: it's fun, but honestly I do not use.

Next record: we just recorded multi-track but must juggle a little, the doc is not clear and only three tracks have a direct button aces.

O little program the DSP, but also must juggle a little bit in the menus.

Apart from the advanced use in difficulites I really like the concept a = 1 function button to get to the point.


In terms of criticisms one can note the claivier too soft and "plasticky", but unfortunately very common now.

I was initially very negative about this kind of machine: photographs sound, styles' daddy music "instrument toys can not be serious.

I must say that I'm actually quite impressed with this machine: I finally used more than others!

I highly recommend, I served for 5 years. I bought it new, it was an incredible price performance ratio.

It is true that the synth type sounds are pretty average compared to a "real" synth, but caught in the rhythm, they are illusion.

I have a large collection of synths, but I confess I'm usually on the SRP because it is very fun: after 5 years, I'm still playing with the pre-programmed rhythms.

Overall it is a machine designed by and for musicians, not by engineers or computer scientists delirious (as many synth alas).

I definitely recommend to any amateur, even as the main engine.

If it falls in the bay, I bought illico the following model: PSR 3000 or any other similar models, because all the top range Yamaha arranger are based on the same logic.

NB: I prefer the rounded look of the new PSR Tyros angular look, or PSR 3000