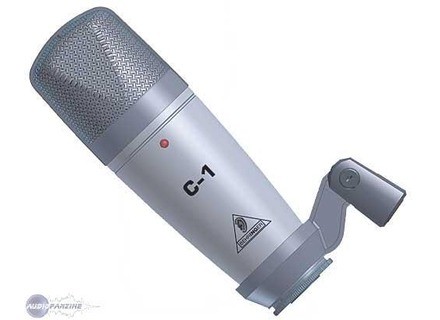 View all offers for Behringer C-1 »

Behringer C-1
5
A lot of people slam Behringer gear. Most of these people don't know or comprehend the design and engineering that goes into pro audio gear. That said, the Behringer C-1 is exceptionally well designed. What happens to that design in a Chinese factory is another matter. Obviously, there are quality controls at Behringer's manufacturing facility, but occasionally you will get a lemon. Send it back. There are some really good C-1's out there. I own 3. I have Neumann's, I have Rodes, Audio Technica, and others. The C-1 is a personal favorite. I say that in part because I can use is for live performances with vocals and it sounds rich and full. Now granted, much of this is subjective and depends upon individual preferences. But I will say that I get many more compliments for vocal sound with the C-1 vs. use of my much more expensive Neumann KMS 105. This has proven to be the case time and again. The only downside I have found to the C-1 is the plastic mount. You can break it if you aren't careful and they don't sell replacements. Wish they would make it with a metal mount. Then all would be right with the world. Thanks for reading and all the best in finding your perfect sound.

killahbzz's review"To start out before moving on to something else"

Behringer C-1
1
What kind of mic? (for vocals, instruments, both...)
I used it to rap and for vocals... Now I use it to sing karaoke with my wife

How long have you been using it?
I used it less than a month. I tried to do the best I could with it (which is not much) but I quickly moved on to a Prodipe ST1, it's like night and day.

Did you try any of other models before buying this one?
I used a friend's home studio gear (SC600) and the differences were obvious. I then switched to an AT2020 and a ST1

Which feature do you like the most / the least?
Well, to be honest, if you are just taking up music and you don't know anything (like everybody when we start out) you are very likely to come across this mic, which is the least expensive on the market but also the one with the worst performance. Investing at least on a SM57 would be much more profitable. It sounds pretty bad, but when we are starting out and don't know much about anything, it's OK. It has a very big dip in the mids while the low mids are really boosted. The highs and lows are not even worth talking about. This mic is a disaster and the only use I have for it is to do karaoke with my wife (even though an SM57 is much more interesting) ...

Based on your experience, would you buy this product again? ...
IMHO, it's interesting if you are just starting out to realize whether you really love making music and see if you can invest a little more in real gear. But if you asked me to buy it again now, I would most definitely NOT do it.
Did you find this review helpful?yesno
»

Behringer C-1
4
Behringer C1 mic to record vocals and even acoustic guitar.
Use exclusively with phantom power and anti-pop filter or say hello to distortion.

I've used it for four years in a mobile studio (Fostex MR8) only.
I've used SM Shure 57, 58, a prodipe too and a sennheiser.
Clear highs, sound is a bit off phase in relation to the lows, even though I notice a better reproduction in the mids.
I use it for pop rock vocals. It takes time to get the best results but I have come to really master it based on very meticulous adjustments (pop-up - mic- mouth distance), the mic's response and hardware effects.
Unbeatable value for money, especially secondhand!
Based on my experience, I recommend it when you are starting out with your home studio or want to produce songs quickly and effectively without braking your head with settings...
Did you find this review helpful?yesno
»

Behringer C-1
2
Large-diaphragm, condenser mic.
I bought it to record instruments (guitar and sax) in a home studio (more like a ghetto studio, actually...)

I had never tried another mic before this one (in a home studio).

This mic doesn't stand out due to its performance (I have made comparisons), but to be honest, it's useful. I think it's not as bad for vocals as for what I had originally intended to use it (sax and guitar).
But its price is unbeatable.

So if your budget is not very high and you want gear to learn, it's a good choice.

The biggest advantage is that the day you upgrade to better gear you clearly notice the difference!
Did you find this review helpful?yesno
»
Read the 20 user reviews on the Behringer C-1 »