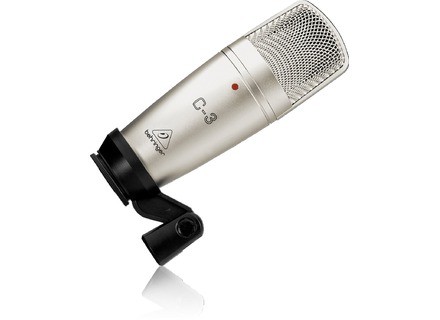 View all offers for Behringer C-3 »

Behringer C-3
1
The Behringer C3 is a cheap electret microphone with switchable patterns.

The Behringer C3 is no doubt the crappiest microphone I ever bought!
The noise level is so high that it is almost not usable.
Especially in omni and figure-8 mode.
Sound quality is also not very good.
I own a pair of Behringer B-5 microphones, and they are excellent!
I don't recommend this product...

Behringer C-3
3
The Behringer C-3 is a large dual diaphragm condenser mic that has a cardioids, omni and figure 8 pickup patterns. On paper the Behringer C-3 looks great because it cost less than 100 dollars and comes with those pickup patterns. But that is not the case, this microphone is very noisy. It is so noisy it pretty much makes it unusable. I do not even recommend this microphone to someone who is on a small budget and is a beginner. You can get a better microphone for cheaper than this one is.

Behringer claims that the Behringer C-3 can be used for instruments (acoustic) but there is just no way that it could work for me because the recordings are not warm enough and the microphone has a constant noise to it. it is built well and has a rugged body to it. I don’t even see this microphone breaking down or going out over time even if it is dropped a few times.
The value for the price that It cost is decent, because it only cost about 65 dollars. But still at that price you can get a better sounding and quieter USB microphone from Blue Microphones or even another brand that will give you a better and warmer sound than this condenser will from Behringer. I have had a lot of problems with Behringer mics over the years and I think it is because they are focused on manufacturing microphones that are cheaper and more affordable rather than putting out microphones that have a great sound and quality to them. The quality of sound is below average for microphones in this price range which I do not understand because if you look at the specs of the microphone you would expect it to sound a lot better and be really quiet like Behringer claims that it is.

Behringer C-3
2
The C3 from Behringer was an up and down mic for me. At first I was happy with it, it has some issues with losing a lot of frequencies from time to time. The crazy thing is that sometimes when I was using it , it would work fine and sound great, but then other times after recording with it then going back to mix the song before it gets mastered and you look at the eq wave forms from what you just recorded with the c3 some of the top end or high’s will be really weak and thin and the mids and lows will be thick and stong. Which means that I had to do some boosting on the higher frequencies which can really get sloppy if its not done right so I had to have someone else to it so I didn’t mess it all up because for some reason I couldn’t get it clean. But this is just too much of a hassle and for the mic to be unreliable, every time I used it I was wondering if it was going to cause this issue again, that is something that I don’t want to be worried with down the road. I want to record and be good to start mixing it down easy before It gets mastered.

The C3 is actually a failure compaired to the sound of the version that was out before this one, that is very disappointing because I have used the c-1 and I loved it many years ago. So when I was thinking of getting the C3 I got it at a discount so I thought it was a steal but when it was all done I ended up taking the mic back for its inconsistency. I had a lot of problems with e frequencies on this mic, I wouldn’t purchase it again.

Behringer C-3
3
Because I own a couple of Behringer B-5 microphones that perform really well, I bought the Behringer C-3. The B-5's have a very low self noise. But unfortunately the C-3 is very noisy! I took a look inside and discovered that they use a cheap TL072 as head amplifier. No surprise that you get noise at this low level... As far as I could see the capsules look the same as the capsules used in the B-5. The pattarn switching is done by a CD4066.
I think I will remove the PCB completely and replace it with a new designed head amplifier. The microphone was rather cheap and the capsules are probably very good. So: a good object for some DIY!

The capsules seem to be of good quality, but the design of the head amplifier is poor.
Did you find this review helpful?yesno
»
Read the 10 user reviews on the Behringer C-3 »