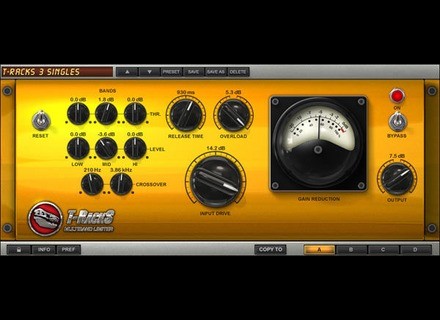 IK Multimedia Classic T-Racks Multiband Limiter
4
The IK Multimedia Classic T-Racks Multiband Limiter is a plug-in found in the T-Racks 3 Mastering Suite software and plug-in bundle. It's a 'Classic' plug-in because it has the look and make up of the interface of the processors found in the older versions of T-Racks. I've mostly run the plug-in within T-Racks 3 rather than as a plug-in in another DAW, but it can be used as either an RTAS, VST, or AU plug-in in your DAW in addition to in T-Racks 3. It can also be purchased as an individual plug-in outside of T-Racks 3, but I'd recommend getting the full software for a number of reasons that I'll speak more about later. I haven't installed the plug-in on it's own, as installing T-Racks 3 as a whole will install all of the individual plug-ins. You might have to put it in the right folder for your DAW, but I guess that depends on the system and DAW you're running this on. The interface has a good amount going on, at least when compared to many of the other T-Racks 3 plug-ins. Being that it's a multiband limiter, you've got control over three individual bands of limiting. Each of the three bands has parameters for gain and threshold, and there are two crossover frequency knobs as well. The plug-in also has parameters for overload, release time, input drive, and output. No manual is necessary, nor have I seen one for this plug-in.

I'm running T-Racks 3 and the Classic T-Racks Multiband Limiter on a Mac Book Pro that has a 2.2 Ghz Intel Core 2 Duo processor and 4 GB of RAM. Like I stated earlier, I've mostly been running this plug-in within the confines of T-Racks 3, but have also run it a little bit in Pro Tools LE 8 that I run with a Digi 002R audio interface. This plug-in will definitely take up a good amount of processing power if you're running it in another DAW, and T-Racks 3 will also take up a good amount of power even if you run it as a standalone. This is really my only knock on the plug-in, but if you have a powerful system you should be able to get by okay.

There's definitely a lot that can be done with the IK Multimedia Classic T-Racks Multiband Limiter. I love using multiband compressors and limiters as it really gives you complete control over your end sound. It's of course best to use when you want to limit only a small section of frequencies, or just the high, mid, or low of a sound. The plug-in's sound quality is definitely more than okay as it actually sounds pretty damn good. I don't always use multiband limiters, but if I do need to use one, this is the plug-in that I'll end up using most of the time. If you're interested in this plug-in I'd highly encourage you to buy the full software as it's really worth it considering the price they're charging for these plug-ins individually. T-Racks 3 and this plug-in are definitely worthwhile to have around in my opinion.
Did you find this review helpful?yesno
»