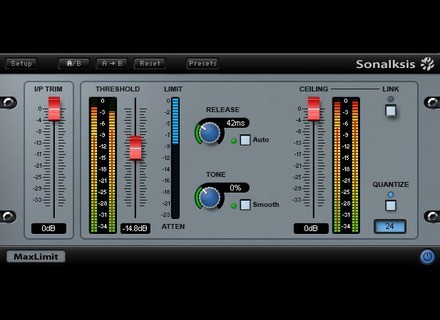 Sonalksis MaxLimit
5
MaxLimit is one of four software tools developed by Sonalksis specially created for modern mastering applications. Nowadays the digital revolution age has drastically transformed how music is mastered. Digitally produced music tends to keep pushing the limits of how hot a mix can be, leaving little to almost no room for mastering, disrupting the music level dynamics, thus disrupting how the music is perceived by the listener. MaxLimit was created to deal with just that. Ultra hot mixes. Different from a regular limiter, Maxlimit is intended to deal with these issues by solving them while conserving music dynamism.

MaxLimit is sold at Sonalksis.com for $279.99. Mastering Suite Bundle is priced at $599.99 and includes MaxLimit and three other plugins. Free 14 days trial is also available in the site.

At first the MaxLimit might look like a regular limiter. Input>threshold>output. The three knobs and three buttons that surround those common features give this limiter its uniqueness. Release allows anything from transitory 1ms release times up to a full second. With the assistance of Smooth you can carefully blend the limited signal so result is natural. The Auto button gives the Release an automatic feature, so it can automatically release depending the income signal. The link buttons cleverly ties threshold and output faders together so you can further carefully explore the outcome when changing threshold level. Once again, Sonalkisis brings few but very useful presets. They are a good demo of what MaxLimit can do.

Product is great, but makes me wish for a smaller price tag. Definitely goes for the Mastering Bundle, instead of buying one at time.

Solid plug in. Faders give control precision and can also customized under set up tab. Powerful result without consuming a lot of RAM.

Great tool for mastering, independent if you at your own home studio or in professional environment. It can definitely help to give any mix a great smooth result.

Sonalksis MaxLimit
5
MaxLimit is a loudness maximizing plug-in from Sonalksis that comes in their Mastering Suite. It comes in pretty much all plug-in formats and for Mac and PC operating systems. I don't own this plug-in but have used it at a professional studio with a Pro Tools HD system. Since I don't own a copy, I wasn't involved with installing it, but I can't imagine that too many users are having problems with this aspect. Learning to use the plug-in isn't difficult either. It's got parameters for input trim, threshold, release, tone, and ceiling, while it also has a smooth button. If you understand what maximizers are about, this should be pretty easy to understand without the help of a manual.

I don't have the Sonalksis MaxLimit and Mastering Suite running on my system at home, but I've used them at a local studio that has a Pro Tools HD system. They ran fine on the system but it's hard to tell their true performance from this alone since I don't use their computer on a regular basis. Still, I think that this will work fine on most systems, especially if you're using it just on the master buss.

As part of the Sonalksis Mastering Suite, MaxLimit is a nice little plug-in. The bundle as a whole is a nice one to have in your suite as it's versatile for mastering and isn't very expensive. The Mastering Suite also comes with MultiLimit, Stereo Tools, and Ultimate D. The first is a multiband maximizing limiter, and Ultimate D is a dithering tool. They are all pretty cool plug-ins and as a bundle they won't cost you much. MaxLimit in particular is effective, but not as effective as the Waves L2 or L3 in my opinion. They're still pretty comparable and the bundle is definitely worth it if you get it all together, but I don't know if it's worth getting just one of them. Either way, MaxLimit and the Sonalksis Mastering Suite is definitely worthy of investigation if you're after some inside the box home mastering tools.