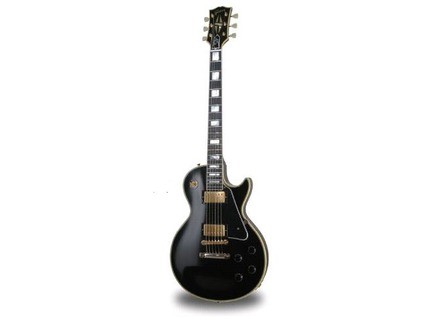 doodb's review (This content has been automatically translated from French)

Gibson Custom Shop '57 Les Paul Custom Black Beauty Historic Collection
4
See the data sheet for the black beauty is the same.
However it should be noted some specifics:
-Bumble bee capacitors
-Version 3 or 2 microphones microphones
Version-stop bar or Bigsby
Note also that in this custom body shop is not hollow and it is made of one piece and the table (both mahogany course)
If you want a Les Paul all there, except that some associate Les Paul maple.

Bon bah it's a Les Paul:
Super balance when you play it standing against the body by being plain and massive it weighs its weight. After access to the treble is crappy, but hey it's not a super strat or SG you want, it's a Les Paul.
the rest is good practice easily accessible portards the toggle too (although its position is confusing when not used). Small reserve on the Bigsby model (which I have) the knobs are less accessible.
If not used the Bigsby it dyed the agreement would probably see for a little touch of nut as a strat for the strings glide well if you use the Bigsby.
-1 For access to acute. I do not take away points for weight because it is a quality: the super dense wood can well feel the guitar vibrate.

edit: I forgot, the ebony fingerboard not change bad hit a standard. Fingers glide over really.

Where the subjective part begins. Well let's be clear if one seeks his Les Paul is just cry with happiness! Beware though, some like his Les Paul a little edgier, this model is not appropriate: you turn instead to another version with a maple table. Here it is hot, very velvety, it growls, but it is super accurate and a bit complex agreements with 2nd sound great even with heavy distortion. It's top quality. And one more potato mad!
It is always a Les Paul: Ultra-flexible. You can really play almost everything with this guitar from jazz to very extreme metal to blues, rock, or hard, or the heavy. The only thing she is UNABLE to do is funky casserole.
Good afternoon versatility does not mean that transparency is not an Ibanez (I said I have nothing against Ibanez which also works wonders), it has character and not a little!
Just by playing unplugged sounds Les Paul, we already know that it will give the amp. I personally play on the mesa (TriAxis + 2:95), but I found it more comfortable with a 50W Orange on which I tried in stores. On Marshall is also gorgeous.
It's hard to put a note as sewers and snakes ... Personally I'm more SG in mind, but I must admit that there is aa no complaints about this Les Paul.

The finishes are MA-GNI-fic!
I had a PRS custom 22 (guitars often compared), it has nothing to do it is clearly at the top with the Les Paul. At all points of view elsewhere (the finish, feeling) nly the place where PRS is doing bein better fucking access to acute.
It has the fault of all Gibson:
-A character that you can not hide
-Varnish that may have a tendency to stick with a little sweat
I paid version two microphones with Bigsby € 4,019. Let us be clear honest: it's a small fortune. But frankly if you have the opportunity to try you will understand why we are willing to put such a price (after I also had the chance to make the purchase). Given the scarcity of super model Bigsby and the fact that Gibson takes its value (sometimes more) after 20 years, as are the character collection that you pay.
Market economy requires (am however not necessarily for), it should be noted the adequacy of the price with the rest of the market. And there still remain honest, it's expensive but it's not that expensive.
Well I'll still take two points for the price because the price quality ratio is better on good old SG 90s (but already it is not serious to compare two guitars)

edit: for further info, I just got a response from Gibson told me the guitar was originally sold $ 7,174