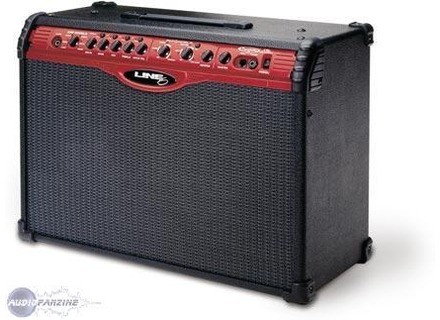 Spider 210, Modelling Combo Guitar Amp from Line 6 in the Spider I series.

Line 6 Spider 210
5
I bought this unit in Bern (switzerland) for about 1500 Swiss Francs including the floor board. I was seraching for the warmth, body and sustain of a tube amp, with price and versatility of the modeling amp. The firt note I played made it clear that the serach was over.

This amp is very flexible. With some tweaking you can get really orgasmic sounds out of it. Due to several banks, you're able to achieve great sounds for clean, solo and base within any style. It is perfect for home practice and keeps the integrity of your settings as you increase the volume. I'm very demanding with my sound and Spider holds it all. You can even push farther as you get to know it better.

Now the nasty part. This amp is for quality badroom practice. If you are playing Metal, decent volume for rehearsal can only be achieved by mic through PA. You will loose in quality too. This amps has no external speaker jack and, most importantly, it has no FX-loop. For me, these are the only limitations and the reason why it is rated "entry level". Considering the sound quality and features compared to other amps in its price range, I have to give it a 5.

Well contructed and durable. Resist some serious insults. I just think the guys at Line 6 could have added an EFX-loop and maybe and external speaker jack. Other than that is perfect.

If you want real tube-close sound and quality effects, being able to store a huge varity of settings, then get this amp quick. Please consider that it perfoms best for homepractice and that it doesn't have an EFX-Loop nor an external speaker jack. If that's ok for you, run and get your hands on this one, I highly recommended it.

Line 6 Spider 210
5
This solid state modeling amp is a fifty watt rock and roll machine. but if blue or that old twangy country sound is more your thing, that's fine, too.

A quarter inch jack for your guitar allows you to select from four preset channels (that you can also customize), and 6 different basic tones: Clean, Twang, Blues, Crunch, Recto, and Insane, from cleanest to most distorted. you can fiddle with the ton knobs, which provide the usual high mid and low setting, and there is also a knob for adjustment of your reverb.

There are built in effects, allowing for chorus, flanger and tremolo by varying degrees, and three different echo types (delay, echo and ping-pong, which makes the sound hop back and forth from one speaker to the next.

Your master volume resides near the Ethernet port for the foot pedal you may or may not have, and further to the right is the quarter inch headphone jack, and the power switch.
Around back is the power cord input, and you're all set.

The general configuration of the amp is made to be simple. This amp is meant to be streamlined for those who want less frills, but still want to rock the pants off of whoever they felt necessary. The knobs turn as smoothly as silk, and setting your presets is as easy as playing &quot;Mary Had a Little Lamb.&quot;

I have my four presets configured, and love them all. You can easily mess with anything on this amp, and it's wonderful.

The manual explains everything with enough detail for you to understand what you're doing, but not so much jargon that people would be lost.

This model of Spider suit me very well. As I don't always want to play the same thing, this amp allows me to break the notion in people that whatever your band plays most of, that's what kind of band it is. With the Spider, I can always keep 'em guessing.

I use my array of Ibanez guitars, including my IC-300, and ARC-100, and my Fernandes solid body acoustic. Occasionally the Dean Acoustic Electric is brought out to play on it, but not very often.

One of my favorite tones is the &quot;twang&quot; preset that i made. I've used it for many tracks i've recorded, and I've always been happy with the result.

The Insane setting can be a little overbearing, even for this metalhead.

I have been using this amp since the summer of 2000.

The thing I dislike about it the most is it's weight, but it's far outshined by it's ability to be versatile and streamlined at the same time.

I tried the Flextone II at the time, and felt it was too much for me at that time. Sure Marshalls sound nice and all, but what was wrong with getting something that can sound about the same, and isn't limited by having just one sound.

buyers can get this amp in particular for a steal, as the value has gone way down with the introduction of subsequent Spider lines. I got it new for $711 including the Line 6 FB4.

Knowing what i know now, I'd still buy the amp, though I'd probably wait for the price to go down.
Did you find this review helpful?yesno
»

guymontenero's review (This content has been automatically translated from French)

With a very corecte strat on clean sounds, very clean thanks to 2 HP (STREO) the sound is impressive saturs a wide range of blues ... and then ...

In least4 years that I use, it is very portable and versatile aesthetic for an amp modeling it is really too simple to very good report quality price jobs
Did you find this review helpful?yesno
»

rem777's review (This content has been automatically translated from French)

An amplifier and a simple setup for new guitarists.

Agrees quite well with my style of pop / rock, blues ... but lacks a library of effects that can be found by adding a few pedals

Amp goes everywhere and quite solid.
The only weak point that bothers me is that to move it in a table must be a pretty good microphone sm57 type and even the sound is not always easy to find on the facade. But a good amp to repeat ... more to follow
Did you find this review helpful?yesno
»
Read the 5 user reviews on the Line 6 Spider 210 »