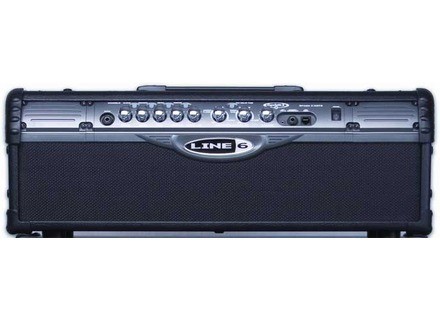 Bought this unit at Guitar Center in Lancaster Pa. Played on it for about a half hour then salesman played on it for 10-15 minutes. After hearing it I decided this is what I wanted.

Flexible, 12 different preamps, looks, all the modern musicians seem to be using them.

It is not working.

Bought this one year ago with a warranty. As soon as warranty runs out the pre-amp section starts cutting out. Literally shuts off and then comes back on very loud over and over. Then when I google the issue I find that people are having all kinds of bad issues with these things plus the problems that I am having. Poor quality as far as reliability and alot of bugs. And of course bring it in and we'll get it fixed. Who wants to spend this kind of money on something like this and then have it not work. Absolutely angry and frustrated. Thanks alot Line 6 for ripping us off. DO NOT BUY line 6 units they are junk.

This head is awesome matched up with the spider II cab or with anything else. I have been using it for about 6 months now and played at fairs and gigs and it has never let me down. Best thing I ever bought!!!

I have no dislikes about this unit whatsoever.

This unit is constructed firmly and has awesome quality

Line 6 Spider II HD75
5
Bought the Head and Cab for $800 at Guitar Center. Played the combo and it was alright but I wanted the bottom end you get from a 4 12 cab and this bad boy does the trick.

Played every almost every amp in guitar center. For the price this bastard rocks.
While jamming in the store some want to be rock star was playing a Mesa rectifier.
I set the spider to sound just as good if not better than the mesa over priced monster. The power from the spider II HD is incredible as so is its tone. I have a fender scorpion, Iceman 400, a strat and my old 1985 washburn g-10. Every guitar had a different but fantastik sound through this amp. use the twang and blues settings for your single coil strat, AMAZING. The effects are great but take some geeting used to. Reverb is out of this world.
Do yourself a favor, and play one of these amps today.


I don't like the floor board costing over $200 for this great amp, so I purchased the cheapo to change channels for 80 bucks.

This amp is great for the price.
compare it to the big boys, marshall, mesa, ect... Don't waste your money on that expensive rockstar crap.
Try a spider II

Line 6 Spider II HD75
5
I bought it, there are about 2 months and I still do not regret it!
For the price, I could not RVer better, Guitar Studio 220 euros in Lille.
The sounds are extremely bleuffant for the transisor!
The power of a standard 75 watts mono.
I use a Behringer BG412H Bafle quip in HP Jensen, a marvel (qualitprix report).
When even a small default: no output line.
As against a headphone / recording simulator HP impcable to play at home without annoying the neighbors and bedding on a sound system, if you can not afford right now to buy a Bafle.
If like me you do not have deep pockets, to give you all the light, Do not hesitate one second!
At the risk of rpter is bleuffant!
No need to have a super skyscraper for the sound!
Personally I have a Squier Standard Tlcaster and knocks plutt well!

Setup is simple, if we repre fast enough, the possibilities are sound in quality imprssionnantes (for the transistor) and numerous.
As against the manual is plutt summary and not necessarily explicit, especially for folks like me.

I'm currently playing with a group Pop / Rock and I could not get any better esprer seen my little ways. I play on a standard Squier Tlcaster plutt sounds like the Red Hot, RATM ... and the risk of prtentieux stepfather, I must say that I'm close. I use most often INSANE channel, then the CRUNCH and CLEAN for plutt reggae sounds. There is nothing I dtest on this stuff, may be from the chorus and flanger effects that I find a bit shabby without the possibility of rglages rels.

I use it for 2 months, and no complaints!
I tried a lot of stuff before I DCID, and the ratio price quality, hard to beat.
I do it again this choice without a doubt, and I advise many others.
Did you find this review helpful?yesno
»
Read the 6 user reviews on the Line 6 Spider II HD75 »