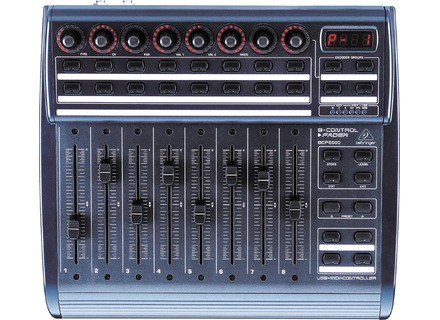 The BCF2000 is a hands-on control surface with 100-mm motorized faders for control of virtual mixers, organ-drawbars, synths and samplers.

The BCF2000 is USB compatible, features full MIDI In/Out/Thru capability and includes 8 endless rotary encoders, each with a 15-element LED indicator plus a push-to-set function, that let you select, adjust, set and control a myriad of functions. Assign a dedicated knob, fader or key to your most frequently used functions and make edits without touching the mouse. Tweak “front panel” settings by simply turning a knob or sliding a fader. Simply connect your B-CONTROL to your computer via USB. Then assign and control MIDI/audio sequencers, software mixers or virtual synths/plug-ins with real knobs and faders

Behringer B-Control Fader BCF2000
5
The BCF is a usb powered motorized 8 fader control surface retailing for under $200. It has 2 buttons per channel along wit a endless rotary knobs. The BCF2000 comes logic, mackie, and hui control built in and can be programmed to control and midi capable feature in your selected software.

This control surface is really bang for your buck. Motorized fader for under $200 you will not find anywhere else. Expect to pay at least $900 one. Fader responsiveness is good enough to use. Once set up it will take some time to learn since functions aren't listed on the controller, but once you learn them this can speed up your work flow. The size of this controller is good. its 13x11 so it won't take up a lot of room on your desk. Other control surfaces like the mackie and alesis I find rather large.

My biggest complaint is there in no led screens to see which track you have selected in pro tools, in logic this is not a problem because one of the buttons highlights to show selected track. Also this was an absolute pain to get working with Pro Tools. Had to do a lot of downloading extra software and configuring. Once it was set up it was fine though. My biggest second complaint is that the faders are rather noisy. Hearing the motor move the faders is annoying, especially when playing back a mix. Buttons are not labeled so you have to memorize or print out the layout of what buttons do what in what DAW. Buttons are a little too clicky for me. While recording my podcast I always have to go back and edit out the clearly audible click the control surface makes when I'm punching in. If your recording someone not in the same room with you than you will be ok.

Behringer is not known for their build quality but the build quality on the BCF2000 is better than it seems. At appearance it looks all plastic but holding it in person it has some weight and mass to it. All buttons are hard plastic.

Behringer B-Control Fader BCF2000
4
I love this thing tho I wish I could use it as an audio interface its not a bad mixer at all. Then again its Behringer so maybe its best they stick to midi lol

Originally posted on FutureProducers.com
Posted by: Xabiton ( 9-, 2005)
Did you find this review helpful?yesno
»

Behringer B-Control Fader BCF2000
4
I have been using this product for about 4 months. I had my eyes on the Mackie digital controllers, but the price of those was prohibitive. I soon discovered that audio on the cheap company Behringer had a product in the same vein. I have been quite happy with this since getting it. It is very easy to install, simply connect with MIDI, set your program to recognize it, and it works very well. The manual is unfortunately not that detailed, but you can find help online if you need it. You can connect more than one of these if you want more channels. It gives you 8 faders that are motorized, and with most programs you can write the fader automation on to your song. Then when it plays back, the faders will automatically move. You can switch which tracks are controlled by which faders as well, so you are not limited in that way. There is also a pan pot for every fader, so you can assign that to control panning or other things in your DAW as well. There is a limited amount of visual feedback in terms of display on this controller, but that is part of what you lose with the hugely lower cost of this when compared to the Mackie or Tascam controllers. In terms of sensitivity, it has worked totally fine. The feel of the faders feels no different from the Mackie one, which a friend has. There are also other handy functions. You can mute and solo the tracks that are selected for the faders. You can start and stop playback with it as well. One thing I don't like is that since it's cheaper components, it's a bit less durable. One of the caps on my faders has already come loose, and while some superglue fixed it that should tell you something about the craftsmanship. For the price, you absolutely can't get a product like this cheaper, so it's a great value. I am overall happy with it, so I would get it again.
Did you find this review helpful?yesno
»

Behringer B-Control Fader BCF2000
5
How long have you use it?

I receives Monday, I am very excited ...
It is quite feasible to mix the mouse, but what long as we lose time.
There's marketing guy at behringer who understood.
At that price, I guess there will not be the little leather pad as a SSL!
But for many home studio, she falls smack bang! that's the point.
Did you find this review helpful?yesno
»
Read the 49 user reviews on the Behringer B-Control Fader BCF2000 »

View the 18 files about the Behringer B-Control Fader BCF2000 »