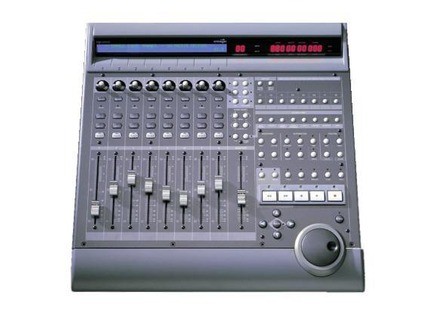 Blue Bird's review (This content has been automatically translated from French)

Emagic Logic Control
5
After a few weeks of use, here's my verdict:
Undoubtedly this is a great control surface.
Happiness is being able to bar the horrible DGIG transport logic (one is satisfied with very little), and especially the mouse. To finally mix the ear and not the field mouse up having red eyes force to look at what one does rather than listen to (and yet I am not of the old School of 'analog. I have always bathed in the numrique).
All shortcuts are important l. It's a real rgal not waste time click on "Rec", "Mute" or "Solo" moves the mouse. Have access in fractions of seconds to the master fader, or when not, it takes two shot down for a one or pick them up the other side of the window Mixer. It can con stepfather but a cot with a customer life-changing.

Good, but these boxes are the connatdj all aadj t relat thousands of times in the press right-thinking. Let's just wrong, justify the 9 plutt the 10.
There is the same things that grieve me a bit:
- The price, which does all of the same evil, when we love even if you do not count. Especially considering the arrival of surfaces of the same template that provide input-output audio and midi
- At noon precisely, which requires to have a port for the area between left alone, so you need a dj multiport midi interface if you want to connect a single keyboard and LC matre. While a FireWire or USB solution would have allowed the reverse (the LC interface also serves MIDI).
- The sound of the beast. Indeed. the fader are relatively quiet (in automation) and know how to be discreet when you mix a trs rsonnablement low level. However, we hear them well during the phases of silence, or mix low-level (what I do quite often, I do not level too much, I only do it for the final assessment). Add to this the sound control keys (circular) and transport that make a sound rather dry and relatively strong. Some say it's normal, it is to be able sr have pressed the button and that is aa good contact. Amen. But then I AIM a more rounded, less aggressive. Ditto for the faders, which high speed, especially when the new start in motion, make a rubbing noise lightweight jerky. We made many studies on the acoustic closing portires car so why not on the movement of a fader control surface? Shame (but once again a level rsonnable mix all these people remains inaudible).

If resources permit the control logic is really exemplary as a control surface for Logic. Even if solutions are beginning to see all in one day, I remain convinced Ormis-tunes-it's better to have several lments impcablement that make their jobs rather than one that makes a lot of things but less well. The SC is part of this.