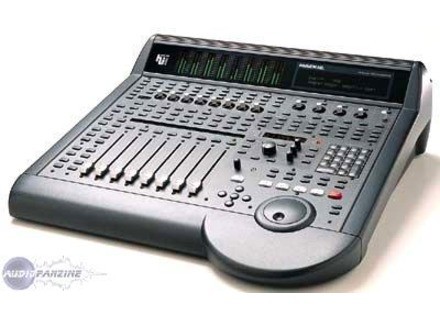 Mackie HUI
5
I first purchased the Mackie HUI about three years ago and have found that it is a very powerful machine in terms of controlling a DAW. I have used it both with Steinberg Cubase SX 2.0 and Pro Tools LE 7.4. I got it because I wanted to be able to feel fader and twiddle knobs while I was mixing inside the box of my DAW. There are controls for virtually everything you can think of in your DAW. It has great metering and is overall a good looking unit. While it is easy to follow and learn how to use, there are still a lot of things I don't know about it, simply because there are not enough hours in the day. Since it only merely controls something that you could control inside your software, I use what I find most useful on this and haven't delved into other parts of the machine. For example, while you can control plug-ins with this machine, I decide to control them within in my software because I like the look of it. However, it is there for people who would like to use it. While there have been a few different models that Mackie has made since they made this one, like the Universal Control, I like the overall look and features on the HUI the best. I would also compare it to the Digidesign 002 and the M-Audio Project Mix. I would also favor the HUI over these, but that could just be because I have used the HUI extensively, and haven't used the others as much. Another great feature of this board is the two on board preamps that can prove to come in handy! While they aren't the best pres in the world, they definitley aren't the worst! The fader also have a great feel to them and have LEDs above them indicating which track is which. If you are looking for a board to play with outside of your Digital Audio Workspace, and you can find one of these on eBay (as Mackie no longer makes them), I would recommend giving this a try! While it is really just a big toy and is fun to play with, it can really help sometimes to have some faders to play with when you're mixing.

soundfegekarma's review (This content has been automatically translated from French)" simply EXCELLENT!!"

Mackie HUI
5
I vien to acquire this console for the modest sum of 100 euros per person thought to have slammed the gold it props change the fuse I took him for revision but not anything she turns the hair and I love everything above is that the bb on sonarx1 impossible to turn the beast (which is not compatible hui was originally planned for protools) so I took him cubase 5.1 which makes it turn a perfectly

I have log in midi sound card roland capture quad that just 1.1 ms latency as you say that operates motorized faders and follow the path to the hair volume all this I love all the shortcut found on this machine that does the damage occur more remains much more complete than a mackie control is a bargraph also a dial to change his vst in a wink not nothing to say the machine has 8 years now but it is like new for the price I had a stroke of luck

Mackie HUI manuals and other files