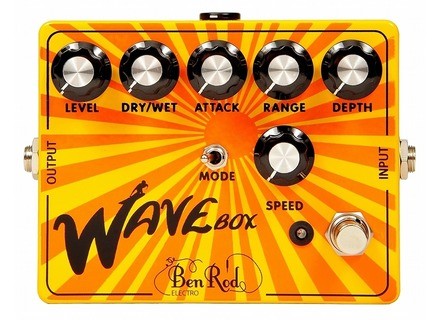 Wave Box, Multi-effect or other modulation effect from Benrod Electro.

po : go's review (This content has been automatically translated from French)"Look no further this is it!"

Benrod Electro Wave Box
5
This is a pedal vibrato / tremolo. It is fully analog and has a good set of editing parameters, 6 settings: LEVEL DRY / WET, ATTACK, RANGE, DEPTH, SPEED + 1 switch &#39;MODE&#39;. A red LED flashes according to the speed and also allows to visualize the rate of "attack" by a molten visual effect.
Designed, manufactured and assembled by hand in France with selected components, internal wiring Mogami, sturdy aluminum housing brand Hammond, true bypass. Powered by 9V power supply or battery-type sector Boss, this is not a "bouffeuse" batteries, it is rare enough to report.
It is mono, one input, one output. Beautiful yellow and orange colors, screen printing features black, conspicuous, good choice of font classic character, which changes some pedals with exotic tastes when you need a PharmD to decipher the functions ...
However, do not forget your Phillips screwdriver. In the pile (pun two balls!) Effect is only accessible at the price of removing the four screws on the bottom of the case. At least your plate cheap plastic battery compartment does not barrera after three rpeter here, nothing but métaaaaaaal! the connector is not one of those kind of soft merdouille found on most models of trade, I know you know what I mean, who has not cursed neglect designs economy facing a 9 volt battery and literally tearing tearing a connector 1 euro cent just before a concert! here, do not worry: a good solid well rigid connector. It is in these small details that are considered attention to the production and respect for the user.
For my part, I added some foam to that already present, so that the battery does not move a micron in the case, but I confess, my Father, I am a manic hair ...

The config is simple when you understand what are the functions reference. Just the grind for an hour to take the finesse. With the Wave box is "who can do more can do less", it has access to a very good vintage tremolo as an old Fender, but also the most radical experiments! initially, I chose as my Fender Sidekick Reverb 65 is not equipped with tremolo and I can not do without this setting ...
Wave box is fun and effective and that&#39;s what we love about music, right? She in turn shows very subtle or completely uncompromising, but every time, whether in the almost imperceptible or pervasive, the effect is very beautiful sound and is very musical, in the sense that it alter the sound without altering its intrinsic qualities and that all this is exploitable in the context of a group pieces (what a mix!).
Editing is easy, but we certainly regret not having memory to save its settings and call them up on the fly, as the soundscapes offered are varied. However, do not forget that this is an analog pedal and digital has certainly badly educated us ... and yeah, a strat, a twin reverb or a minimoog have no memory and it does not prevent us so far to play! the charm of the analog is also the constraints that we definitely get better (and less lazy).

Those who want a simple tremolo pedal to instantly find their happiness, and it is likely that the range of adjustment available to encourage them to go further in millimeter sound sculpture and completely controlled. Found no breath and adjusting the level allows a bypass in the same volume and in fact started: not bad thought, it avoids jumps surprising volume and my faith very unpleasant.
We will therefore lightweight, fade and slow the abrupt, extremely fast and very jerky (or finely chopped), through all imaginable shades. Everything is controllable, but good surprises.
In this pedal, I love it!
If you want to know more about her, go to the site and read Benrod test benches available on the web I do not pretend to rewrite what has already been said, and certainly better than I could do !

I use it for a few months and I plug in my effects loop. I have not tried many other things like that, but after all, it is this one I wanted: the best is the enemy of the good. Today, I just do not understand to play without it surprising when you consider what a tremolo, but that&#39;s ... try it and see. The value for money is very good when you realize that the quality at a price. How many times have we all bought "stuff" that we were disappointing and we finally sold it after having found, forgotten and gathering dust in a corner of the garage ...
Congratulations to transition to Benrod team, which proves once again that France has talented people who know how sustainable innovative, beautiful things, and hold a candle to the upper face major international brands. Here, the quality "made in France" has nothing to envy the "Made in USA"!
Whether its bright and clear with reverb for a typical rock&#39;n&#39;roll made 50, to a more radical surfing effect, or added to a monstrous fuzz to anxiety fade as manic fan of the Cramps ( Ivy, we love you!!), or in the most acidic psychedelia (not like sweets, but you certainly me included), this pedal is a rare versatility. It certainly opens the sound and musical perspectives of any guitarist, without the fuss and is a real source of inspiration, in the sense that it will allow you to go in directions that you might not have thought to go without his help. But it is not that the definition of a good effect?

MacB's review (This content has been automatically translated from French)"TO BE OR NOT psyched psyched ROCK SURF ROCK THEM IN USA!"

To be brief, to make it clear to all the world, the vibrato of this pedal is the fact that you can listen to the songs of the BEACH BOYS, VENTURES and other group surf music of the 60s. C is a kind of muffled sound vibration, which marks the rhythm of a song in a slightly jerky. It can also be found on the pieces of PINK FLOYD group in combination with the echoplex David Gilmour.

This is not the Texas vibrato Steve Ray Vaughan, or fenderien a U.S. amp reverb vibrato. It is rather the vibrato pyschedelic obscure group, pagan rock 60s in the U.S. or England, pioneered progressive rock, before Black Sabbath or Led Zeppelin. For once I know this obscure music, I can attest that the effect in this case is faithful to the records of that time.

The configuration is almost "plug and play" for a fan of surfing or country, rockabilly, garage and it becomes complex, but not impossible, for musicians who would be interested in succeptible sound experimentation, combination with other pedals: the possibilities are endless fetch in the psychedelic experimentation of the 60/70.

For the fan of surfing, you can go vibrato "Surf in USA" at slapback very typical country music, rockabilly, garage (Reverend Beatman, Monsters and other Heavy trash ...).

With certain combinations, it may have a slight signal boost, which is pretty good, and also demonstrates the effectiveness of the "true bypass" pedal.

The effect is hyper-realistic, we go surfing, the vibrato effect typical year 60 of psychedelic experimentation, adding a delay or a reverb effect amplified.

For my part, I tried it in combination with a BOSS DD3. Frankly, I was on another planet, we got the sound, a roar of vaiseau space of an old sci-fi movie (DUNE, old STAR TREKK yes!), with lots of loops delay who chained one after the other (it looked like it y&#39;avait several delay engaged, and that it was not a guitar that had been in the hands, but a keyboard, or a moog .. .).

You can also obtain effects BASS on which would put the distortion with his guitar.

I even managed a little after half hour test to get a slight effect of low octave, like on the song "rotten apple" group Alice in Chains, Jerry Cantrell which uses an octave / fuzz in MXR .

The "True bypass" works very well for once, it adds a boost effect in some configuration signal.

This is a pedal that I would advise fans to surf music, rock&#39;n&#39;roll "garage", country, and psychedelic &#39;60s music, progressive rock, stoner, electro rock.

I did not buy because I&#39;m not attracted to such effects, as special as it vibrato, say that I do not currently have utility. It is not in vibrato to Steve Ray Vaughan or that we find on Fender amps, this is something else! To try before then!

This kind of vibrato effect as BENROD designed it, is no longer known Aujoud&#39;hui too, but if you have an echoplex and a theremin, a violin bow or bass, you can quickly take you to Jimmy PAGE or David GILMOUR, John MC LAUGHLIN (period Mayavishnu Orchestra).

I try just out of curiosity, and I really loved the game of experimentation, yet it&#39;s not my thing.

The only downside of this pedal is also its positive all depends what angle you approach it. It is not versatile, ie you can not put all the sauces, unless you&#39;re surfing, or a more experimental music, and ... I say being "down to earth "Is that a pedal like this is really necessary in a pedalboard. I tend to prefer a single delay, rather associating a vibrato like this, that will totally booster, leverage effect, to drown the melody in a flow loop ... This illustrates the fact that it depends on what angle you approach this kind of pedal.

However it is a very good pedal, well made and well designed for the shot. Even if we do not like this kind of effect can not say that there was no behind the design of this pedal, research, listening to old vinyl records. For me this is a true technological innovation to BENROD. Hats off!

+ = Pure analog technology is organic, responsive to change position on all other pedals, microphones or her instrument.

For me it&#39;s still excellent, even if this kind of effect does not attract me! I put 9 because it is a good job, well thought out, well designed!