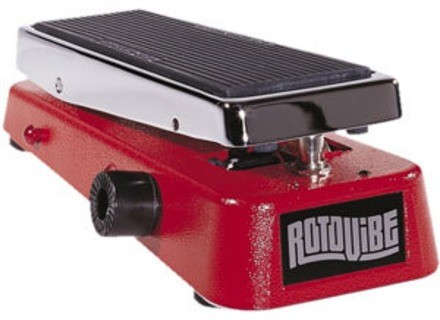 Dunlop JD-4S Rotovibe
5
I bought this unit over the internet at guitartek for £139.95. I bought it because I wanted to add a little spice to my basic valve tone.

I generally really like the rotovibe pedal. It has a enveloping warmth and a quality lacking in many similar chorus/vibrato pedals. I knew that I would love the tone because I remember my friend had one and also from listening to perhaps the best known user of the pedal, dear Jimi...unfortuntately I still don't sound like either of these wonderful players but I'm chipping away at that big block of marble!
It has these two effects, changable by a little switch on the side which you can press with your foot if you're careful and a larger rotary knob for the intensity of the chosen effect. The pedal part (where you put your wah foot) controls the speed, going from a lovely slow swirl to an intense vibey effect.
I love this pedal and it really complements the sound I have which is a seventies Telecaster through oldish valve amps. Like guitars and amps, I think many things were done better in the old days, not just cos I'm getting an old fart, but this sort of gear has a certain quality to it, missing from the new techno age...I think it would suit many styles of music, not just retro sounds like blues, funk and jazz but anything like rock or dance music, you know I bet drums or just about any instrument would sound good through it...quality is quality at the end of the day...

The only thing I could say in a negative sense and it's probably more a matter of opinion than a fault, is that the chorus sound has a slightly thinning effect when on heavy, but it's probably more the nature of the beast than anything and my tele which tend to be thinner in tone than fat humbucking gitars!

The construction was very good, solid and dependable and the quality was, as with most Jim Dunlop products, very good. It is built to last with steel construction and the only maintenance I could foresee would be a squirt of WD40 once a decade!

This is a great pedal, creating some fabulous tones and would be useful to most guitarists, keyboardists or even studio engineers who like to experiment a bit...It's not cheap cheap, but it's definetely worth it, as it'll provide years of groovy sounds for you to drift away into the wonderful world of music, the healer, with!

Dunlop JD-4S Rotovibe
4
The JD4s is a vibrato pedal, even though the name doesn't really indicate that at all. Technically it is chorus and vibrato, which gives it a bit of a different feel. There are the standard 1/4" input and output as well as the input for the power supply. This is an analog pedal. There are no MIDI capabilities, and the device cannot be hooked up to a computer. It is also not rackable.

The editing on this pedal could not be simpler. There are two knobs: one for rate and one for depth. There is also a switch that changes the effect from chorus to vibrato. The manual is pretty much unnecessary unless you need further definition for what these effects are, in which case you probably should not have bought the pedal.

Like the pedal's namesake, I prefer to use this with a Strat, but rather than a Marshall I use my trusty Twin. This is a pretty cool vibrato pedal. It can actually get a surprising range of sounds for having only the two knobs. There is the basic "wiggly" vibrato that gave the pedal its name, and that sound actually dominates most of the settings. There's actually one configuration that will give you a decent Leslie speaker emulation too, which I think is an unexpected but surely welcome bonus. The chorus effect I find less appealing, but that's because I generally like that effect less in general. As a chorus, though, it holds up pretty well. It avoids modulating too hard, and doesn't drastically alter your tone the way that a lesser digital pedal will.

I like the fact that this pedal is really cheap, and actually has a great sound. Like most Moen pedals, there are certainly better ones out there, but it's surprising that this one is actually so much cheaper and can still hang with those. I'd recommend this to anyone who really feels the need for a good vibrato but doesn't want to pay too much money (or frankly doesn't have it!).

Dunlop JD-4S Rotovibe
5
The Dunlop Rotovibe JD-4S is a chorus and vibrato pedal enclosed in an expression pedal/wah-wah type of pedal casing. It is an analog pedal, consisting of 1/4" TRS connections and the ability to be powered up by either nine volt power supply or battery. It isn't rack mountable as it is a foot controlled pedal.

The make up of the Dunlop Rotovibe JD-4S is very easy to follow and understand. The pedal has two modes to choose from - either chorus or vibrato, and a large knob to set the intensity of your chosen effect. You can control the modulation speed of your sound with the foot pedal itself. That's really all that you need to know about the configuration of the pedal, as there isn't anything else to control in terms of parameters. A manual isn't necessary for this reason, although I've never seen it so I can't speak to how well put together it is.

While not the most versatile chorus/vibrato pedal that I've used, the Dunlop Rotovibe JD-4S does provide some pretty awesome sounds. I've used the pedal with a Fender Stratocaster and a 1976 Fender Twin Reverb, which definitely gave me a pretty good idea about what the pedal sounds like. It isn't the best simulator of a Leslie that I have heard from a pedal, but it does sound pretty damn good. I like the vibrato mode better overall, but both of the modes are pretty comparable in terms of sound quality. The best feature that the Rotovibe JD-4S has over other pedals of this type is definitely that it has the expression pedal to change your sound on the fly...

I don't think that I would recommend the Dunlop Rotovibe JD-4S to everyone looking at a chorus/vibrato pedal, but only a select group who think that they will be using the expression pedal to its maximum capacity. While the sound of the pedal is definitely enough to warrant getting this pedal, there are a lot pedals out there for the same price and cheaper that have similar sound qualities and more control. All in all though this is a great pedal that should at least be on the list of pedals to check out if you're in the market for a chorus/vibrato pedal...
Did you find this review helpful?yesno
»

Dunlop JD-4S Rotovibe
3
This is basically a vibrato effect with expression pedal or a chorus effect with expression pedal. I am assuming it is analog, but I am not 100% sure. The only editing you get is modulation control with the foot pedal, intensity control with knob on the side, and a switch for chorus or vibrato. It cannot be hooked up to a computer. It is only 1/4&quot; audio in and out and it is not rackable.

Its very easy to set up. Plug it in. Step down to activate, select chorus or vibrato (I alway forget which one is which, one turns the light yellow, the other turns it green) and adjust the intensity. Thats it. There is really no need for a manual. I never looked at one and was able to figure it out very shortly.

I honestly don't care for this pedal overall. The vibrato is pretty fun because of the expression pedal, but in order to turn it on, you need to push the pedal all the way down, and that means you always have to start at minimal vibrato and adjust it back up. It would have been nice if there was another way to activate it so you didn't have to reset it everytime you wanted to turn it on. The chorus is ok. I own a Diamond halo chorus and the Rotovibe can't even touch that baby. I used to use this in my synth/alt vocals Mixer's effect chain to create some crazy vibrato effects, but in the end, I took it out of my arsenal and am trying to sell it. The

I have had it for six months and I never really used it during that time. What I like about it was the idea of the built in expression pedal, but when I got it, I realized the activation flaw and was very sad ): Also, it doesn't even have stereo options, whats the deal with that. Even cheap boss chorus pedals have that. Again, if you want fantastic chorus, get the Diamond halo chorus, or even and Analog man chorus pedal. Either one will make the rotovibe look childish. Overall, I am disappointed in this pedal. I got mine used for $100 and I regret it very much.
Did you find this review helpful?yesno
»
Read the 13 user reviews on the Dunlop JD-4S Rotovibe »

Other Dunlop multi-effects and other modulation effects