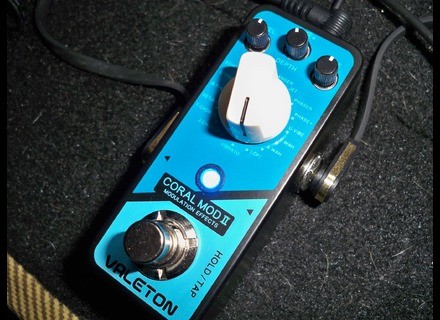 Coral Mod II, Multi-effect or other modulation effect from Valeton.

Valeton Coral Mod II
5
SOUND:
Thanks to the 24-bit technology and custom buffer circuit, the Coral Mod II has great clarity. It also has very low noise, making the inclusion of its tremolos, wahs, flangers, etc., a pleasure to use with both clean and high-gain tones. With clean or slightly crunchy tones there isn’t even a whisper of associated noise (swoosh, pulse, etc.), and with high-gain tones the ‘noise’ is inconsequential and excusable. What stands out as much with the Coral Mod II is that the tones are both organic and natural sounding, but they also penetrate the mix exceptionally well. In sum, the clarity and quality of sounds make for ideal home studio recording, but also when playing gigs when you want to cut through the mix with an effect. I also think the quality of the tones relative to this pedal’s price makes for unbelievable value when compared to other combination pedals, and definitely hard to beat when compared to single use, one-trick pony (e.g., tremolo or flanger) pedals.

OVERALL IMPRESSION:
Valeton’s Coral Mod II pedal offers exceptional value. Some multi-effects pedals have some tones that are winners, some that may be all right, while others are duds. I find all the tones in this pedal usable and superb sounding. There are sixteen modulation effects from which to chose, in categories of Chorus, Tremolo, Flanger, Phaser and Other. This is a brief rundown, but do refer to the included demo for sound samples. The J-Chorus mimics the vintage ‘Jazz’ amplifier, the T-Chorus is lush (modulated by a triangle wave) and the Detune mixes the dry with a slight detuning for a quasi-chorus sound. The B-Trem simulates the bias tremolo from vintage tube amps, the O-Trem is a classic optical tremolo and the Echo-Trem adds a delay to the tremolo for a step-like effect. The Flanger setting is a classic flanger tone, the NFB Flanger includes negative feedback, and the Jet flanger produces that 1980s massive flanger with huge feedback. The Phaser setting produces a bright and sharp phasing tone, whereas the Phase+ simulates the MXR Phase 90 pedal. The U-Vibe simulates the legendary Univibe (4-stage phasing/rotary) circuit. The T-Wah produces a wah effect that varies relative to your picking dynamics (soft wah vs. hard honking wah). The A-Wah automatically varies the wah effect as you play. The LoFi produces a sample reducing effect (from wild and crazy to gritty and thick distortion). The Vibrato produces a warm and natural sounding vibrato. A very good buy at only $69.99 USD.


GENERAL USE:
There are three control knobs: Volume (self explanatory), Depth (mix) and Rate (speed). You can alter the rate manually with the Tap Tempo function (hold the footswitch down until the LED blinks and then tap your tempo). In some instances the control knobs may have different functions. For example, with the T-Wah effect the Volume control becomes the Mix, the Depth controls the cutoff (filter cutoff frequency) and the Rate controls the Tone (effect brightness). The included reference cards (manual) provide clarity and instruction in this regard. The large white control knob selects the modulation effect, from chorus, to flanger, to phaser, etc., and as detailed in the section Overall Impression of this review. The selections are printed white on aqua in very small lettering (since this is a micro-pedal), and so reading glasses for older musicians will be necessary. The footswitch turns the Coral Mod II on/off, or can be used as a Tap Tempo, as mentioned previously.

OTHER DETAILS:
Measuring 93.5mm(D) × 42mm (W) × 52mm (H) or 3.74 (L) x 1.65 (W) x 2.0 (H) inches, the Coral Mod II weighs 160 g or 5.6 ounces. Its aluminum alloy die-cast casing is light, yet strong to withstand regular and daily wear. The soft (no ‘click’) footswitch feels solid with no audible noise in the signal when in use, for both tap tempo and turning the pedal on/off. The mini plastic knobs and their associated pots feel smooth and solid when turned. The footswitch also is set higher than any of the controls, thereby avoiding damage when stomping. The Coral Amp requires a 9VDC standard power supply (negative tip) while drawing 100mA of current.