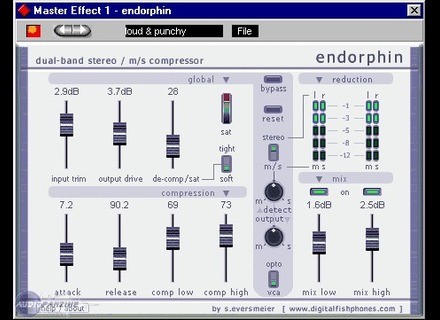 Digital Fish Phones Endorphin [Freeware]
4
The Digital Fish Phones Endorphin plug-in is a dual band compressor, usable in either traditional stereo or M/S modes. It is a free plug-in that is available for download straight off of the Digital Fish Phone website. All of their plug-ins are free, so they're definitely worth knowing about in general. I don't remember exactly what formats this one in particular in compatible with, but I was using it on my old PC system as a VST plug-in. I haven't tried, but I don't think it will run in Pro Tools on my current Mac system. As long as you're properly compatible, it should be easy enough to download and install the plug-in as I don't recall having any problems doing so myself, although it's been years since I had it. The interface of the plug-in itself isn't too hard to use, although there's a nice array of parameters to get used to here. For starters, there's a button to use the plug-in either in M/S or stereo mode, followed by sliders for input trim, output drive, attack, release, comp low and comp high, and de-compression/saturation. It also has options for using it in M/S mode, as well as mix low and mix high levelers. I'm unsure of if there's a manual for Endorphin.

While I'm not currently running the Digital Fish Phones Endorphin plug-in and it's been a few years since I have, when I did run it, it was on my old PC laptop and in Cubase SX 2.0 and later in 3. The computer was a Hewlett Packard Pavilion dv8000 with a 3.0 Ghz processor and 2 GB of RAM. I don't really remember having any problems running this plug-in and I'd honestly be surprised to hear if anyone did have problems with it. Usually free software like this is made with the intention to be used on all sorts of systems...

Since it's free, the Digital Fish Phones Endorphin plug-in is definitely one to check out if you're DAW will allow you to in terms of compatibility. It's a pretty in depth dual channel compressor, and it's awesome that you can use this is M/S mode rather than just in stereo as you'll get with most plug-ins. This feature helps to set this plug-in apart a bit, although I don't think it's the best sounding compressor overall. I like to array of parameters here, as it's definitely a fresh and unique approach to compression. Again, if you're able to run this on your system, definitely give it a shot as even though it's not really a professional plug-in, it still sounds pretty good and can do some interesting things for sure.
Did you find this review helpful?yesno
»